You receive this quest after you meet with Sidha and Rihenwn in Twin Elms, in Elms' Reach (M37,6) during The Assassin at Large main quest. It assumes that you pray to deity for their favor and, for this, enter Teir Evron (M37,7). Go to the eastern part of that location and find the altar with Luminescent Adra Shards. Take the item and go to the central part of the Hall of Stars to put it in appropriate slot. This will unlock some of the pulpits, thanks to which you will be able to pray to the specific deity. 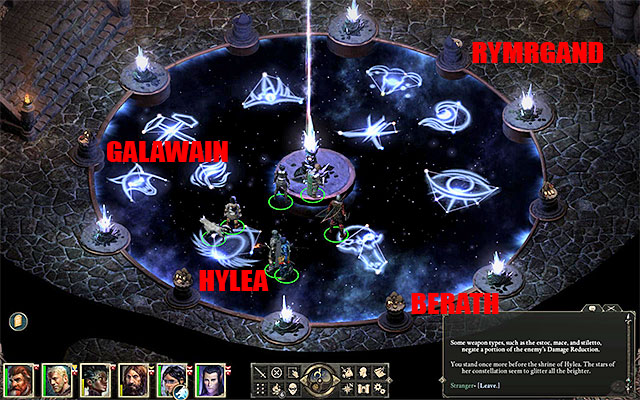 Pick, at least, one deity (you can take interest in all the available ones) and interact with the pulpit linked to that deity. This will initiate a cutscene, in which it will be necessary to pick the appropriate dialogue option, connected with the correct ritual text. You can use the books, which you find all around Teir Evron, for reference, but if you do not feel like reading them, use the ready-made solutions. If you do everything correctly, you unlock a new quest connected with a given deity, e.g. doing a favor or taking a streak of tests. If you make a mistake, you will be attacked by monsters, whose types depend on the individual deity.

Hylea - Pick the fourth dialogue option- "Live every note of life's song". You receive The Nest Above the Clouds quest.

Galawain - Pick the third dialogue option -"Survival begins with strength from within". You receive The Old Queen and the New King quest.

Berath - Pick the second dialogue option -"There is life in death, and death in life". You receive the A Servant of Death quest.

Rymrgand - Pick the seventh dialogue option -"All life ends in stillness" . You receive Into the White Void quest.

The quests that you receive have been described in the chapter entitled "Gods quests in Elms' Reach".

After you perform the actions for the given deity, return to the pulpit and pray again. During the vision, always pick the action at the top of the list of dialogue options, thanks to which you do not alienate the deity and do not lose the favor. For the purposes of the storyline, you only need the favor of one of the four deities, but it is better, of course, to complete all four tasks.