Below, you can find the descriptions for the quests connected with the deity, which you unlock thanks to performing correct rituals in Teir Evron, in Elms' Reach (M37,7). It is a part of the Court of the Penitents main quest.

Important! Completing all four quests of the gods is not required to finish the game. The game requires that you finish at least one of them before proceeding with the last part of the campaign. If you don't mind you should still take interest in all of them since completing them will allow you to gather a lot of experience and valuable items.

Hylea -The Nest Above the Clouds

You need to travel to the Temple of Hylea up in the mountains, above Twin Elms to deal with the threat that haunts it. Travel to Oldsong in Twin Elms and examine the Hylea's Shrine (M39,1). Talk to Casfath and Onwen, to learn that there is a huge dragon residing in the temple. Leave Oldsong through the Northern exit, to reach Northweald . 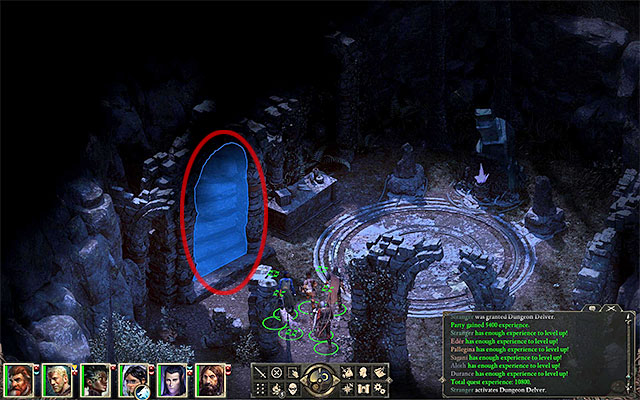 Reach the stairs in the North-Western part of the map (M57,3) and deal with several monsters led by adragana. Interact with the stairs. You can cut your way through, by using the chisel an hammer, by moving the huge boulder (requires a character with, at least 16 points of Strength) or try to walk around the obstacle. Regardless of what you did, you need to keep in mind that, along the path to the Temple of Hylea, the party members with low Athletics may take damage. If necessary, take a rest afterwards.

You start in the Southern part of the temple (M58,1). Head towards the big nest (M58,2) where there is the Sky Dragon. After the conversation with the dragon starts, you can do either of the following. The more obvious variant is to attack the dragon, and the wyrm. It is a very tough battle, because the beast deals lots of damage, is resistant to many of the ranged attacks and can, additionally, stun party members, as well as form the aura of fear. Therefore, it is advisable that you use all sorts of protecting and buffing potions, before you start the battle. An alternative is to handle the conversation with the dragon in such a way, so as to allow him to stay in the temple. During the conversation, avoid too aggressive and resolute answers, thanks to which you will reach the desired effect.

Regardless of whether the dragon died or stayed in the nest, return to Teir Evron afterwards (M37,7) to talk to goddess Hylea again, and gain her favor.

Galawain -The Old Queen and the New King

During the vision, you will see a stone maw in the shape of a wolf's one. This is a hint on which location you need to visit to complete this quest - i.e. Galawain's Maw (M40). The entrance is in the central part of Oldsong (M39).

You start in the South-Western part of the Maw (M40,1) and your first task is reach the Galawain's Shrine in the North-Eastern corner (M40,6). There are several paths that you can take to get there. You can cross the first part of the location, by meeting with Desthwn by the Northern passage (M40,3). After the conversation, you receive a key. Use the key in the door, but expect to encounter lions, lionesses and members of the Lion clan. The fights are not too demanding, but avoid attacking too many opponents at a time. An alternative way is to take interest in the destroyed bridge (M40,2). Here, you need to have a grappling hook. By choosing this variant, you will be able to avoid some of the fights. There also are two ways to cross the second part of the location. The better idea is to reach the vines (M40,5) and squeeze through them. The other variant is to cross the eastern part of the caves and fight several fights. In both cases, watch out for numerous traps on the ground. Walk around them or disarm them, on a regular basis.

In the Galawain's Shrine (M40,6), there are Irensi and lioness Sul. Two main ways to act here assume that you attack the opponents here, in order to kill Sul or, to agree to eliminate Oernos the Bear. If you decided to follow the first variant, you are up for a VERY demanding fight. Apart from Sul, you will also have to defeat Irensi, the lesser lions and the clan members.

During the encounter with Irensi, you can use persuasion and pick one of the unique dialogue options. They are exclusive for druids, Bleak Walkers Hunters and Ranger. 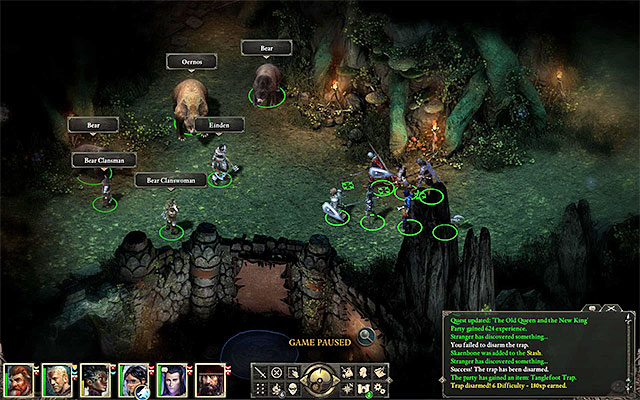 If you have not attacked Irensi and Sul straight away, you can meet up with Einden, who is waiting with Oernos the Bear at the northern exit from the Maw (M40,7). The pattern of actions is very similar here. After the conversation ends, you can, first of all, decide to kill Einden and Oernos, or alternatively, agree to kill lioness Sul. The ensuing fight with the bear and the rest of the enemies is slightly easier, than in the case of the lioness. Apart from Einden and Oernos, you would have to defeat clan members and two smaller bears.

Regardless of what you did at Galawain's Maw, all being done, return to Teir Evron (M37,7) to talk to god Galawain again, and gain his favor.

During the encounter with Einden, you can use persuasion and pick one of the unique dialogue options. They are exclusive for the Fighter, Ranger and the Darcozzi Paladini.

Still another solution to the conflict at the Galawain's Maw is to kill both of the beasts, i.e. the lioness Sul and Oernos the Bear. However, do not do that if your party is not sufficiently strong. Also, in such a situation, have your party rest after the first battle.

Berath - A Servant of Death 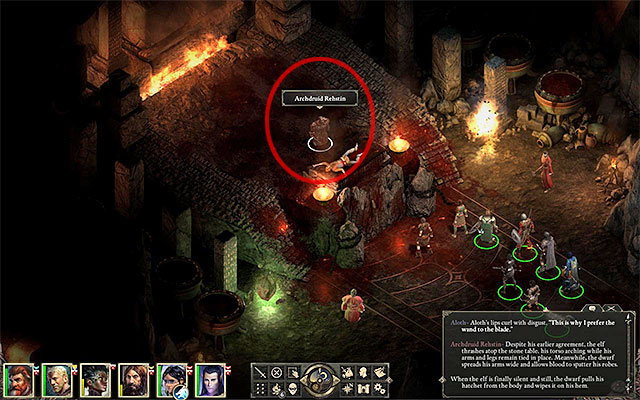 The Archdruid is the first one singled out by Berath

You need to kill two NPCs - a dwarf and an elf, who you have seen in your vision from Berath. The dwarf that you are looking for is Archdruid Rechstin who is staying at the Blood Sands (M38,5), i.e. the underground location that you enter from the side of the Elms' Reach. After you enter the cave, go to the Blood Sacrifice Chamber. Before you attack the archdruid, make sure that you have completed all of the other quests at the Blood Sands, because all of the NPCs in this location will attack you afterwards. Try to kill the archdruid as quickly as possible and focus on the rest of the opponents then. You should especially watch out for the various types of blights and for sentinels that can cast spells.

The elf that you are looking for is the High Ovate Erona. Go to The Golden Grove in Elms' Reach (M37,5) and talk to Iswld. You learn that Erona often travels to Elmshore where you need to go also. The Ovat is by the circle in the Eastern part of the map (M35,5). Attack Erona and try to kill her in the first place. Deal with the rest of the opponents only after she dies.

Finally, return to Teir Evron (M37,7) to talk to god Berath again, and gain his favor.

In the case, in which your character has, at least, 15 points of Resolution, you can convince Erona that her life cycle has drawn to an end. After that, she will take her life herself and you will not have to defeat her in battle.

Rymrgand -Into the White Void

During your vision, you see The Frost-Hewn Breach in the Noonfrost temple (M41). The entrance to the temple is in the Northern part of Oldsong (M39). After you get inside, talk to Vesgel in the first chamber (M41,1). You learn that visitors are not allowed in, including The Frost-Hewn Breach (M41,8) connected with this quest. 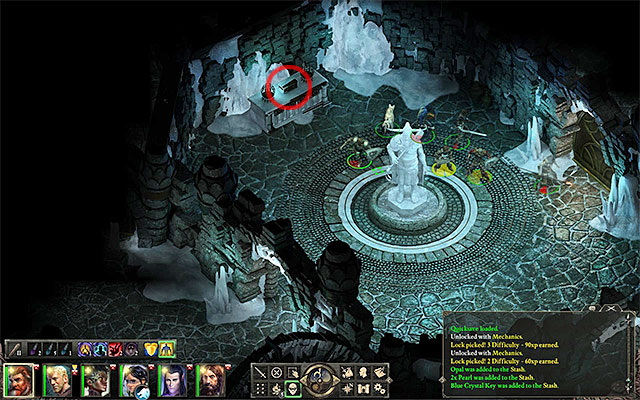 Take the blue key, after the guard exits

You can storm The Frost-Hewn Breach by force. To do that, go North, attack the guards in front of the inaccessible entrance (M41,4) and pick the easy lock.

Things get very much complicated, if you want to reach your destination without getting into fight. For that, first reach the North-Eastern chamber in the temple (M41,2). Wait for the guard to leave the room and open the lock on the chest (requires 3 points of Mechanics) and collect the blue crystal key. Go to the door to the West of where you met up with Vesgel (M41,3). Open the door with the key and from here on, proceed in the Stealth mode. You need to break into the room to the side (again, it requires 3 points of Mechanics) (M41,5) and open another chest there (requires 6 points of Mechanics). From the chest, take the white crystal key and open the Northern door with it (M41,6). Carefully, walk around the single mage and in the office (M41,7), find the secret switch that moves a fragment of the wall.

After you reach The Frost-Hewn Breach (M41,8) approach Glasvahl to start a conversation. First of all, you can attack all of the NPCs here, but you need to be prepared to fight a difficult fight (as quickly as possible, kill the most powerful mages). If you do not want to attack them, give

Glasvahl the luminescent ice crystal that you have received from Rymrgand. Glasvahl and his people will cross the portal (negative reputation).

Regardless of what you did in Noonfrost, all being done, return to Teir Evron (M37,7) to talk again to god Rymrgand and gain his favor.

If your character has, at least, 17 points of Resolution, you can convince Glasvahl not to use the crystal. In such a situation, all of the NPCs leave the temple (lots of positive reputation points). Before you leave the temple, slide the crystal into the interactive slot, to close the breach.