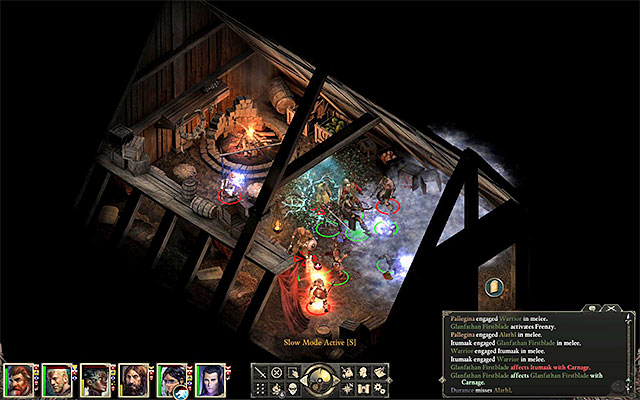 The place where you find Alarhi. Murdering her is the more extreme solution. You can also take a more amicable approach.

You receive this quest from trader Rinatto, who you can meet close to the elevator to the Celestial Sapling Inn (M36,2). From Rinatto, you learn about the failed transaction with herbalist Alarhi and he asks you to find out about the reason, for which the woman refuses to return the money. You do not need to search for Alarhi at the local market (only her employee Iwen is there) Instead, go to her cottage in the Northern part of Hearthsong (M36,7).

If you have decided to give Rinatto the cage, you can try unique actions, only available for characters with 13 points of Constitution, 15 points of Dexterity and 15 points of Resolution. If, on the other hand, the strength of your character is, at least, 18, right at the beginning of the meeting, where you ask Rinatto to leave the Elms, you will be able to pick the unique dialogue option.

If Rinatto left Twin Elms voluntarily, you encounter him again on Elmshore. Rinatto Comes with guards and after a short conversation he attacks you. Fortunately, defeating the trader and the mercenaries is not too difficult. It is worth adding that Rinatto drops, among others, an unique firearm.

The Champion of Berath

You can receive this quest only if you have managed to overthrow Raedric, during the Lord of a Barren Land quest, while at the Raedric's Hold (M9). Now, at the Celestial Sapling Inn (M36,2) meet up with the Frightened Villager, from whom you learn about the return of Lord Raedric from the dead.

After you reach the Raedric's Hold, by the drawbridge, meet the Fampyr (M9,1). Allow him to take you and the party to the place where Raedric is, which is the siege engine on the rooftop of the keep (M9,6). Here, you meet Raedric and, after the conversation, you are going to fight a difficult fight with him. During the fight, you should predominantly, take care of the weaker party members and keep Raedric away from them, with your warriors. Examine Raedric's body after you've defeated him (he was using a high quality sword and armor). You can also meet with Fampyr again and decide if you want to kill this character or send him to your stronghold.

At the Mercy of the Tribes

Rind ranger Cwineth at the Celestial Sapling Inn (M36,2) and talk to her. She asks you to locate the Dyrwoodian expedition and warn the members of the expedition about the Glanfanthan trap. Go to Oldsong (M39) and cross the passage to Northweald (M57). Start by exploring the pilgrim camp near the starting point (M57,1). Get rid of the wolves (watch out for the wolf leader) and examine the corpse. Now, go Eastwards. Soon, you reach Cwineth's new staying place (M57,2),. Talk to her. You will learn about the stalemate between the group of Fangs and the members of the expedition, who are defending in the nearby tower.

Go eastwards and you will encounter a group of Fangs (M57,7). Here, talk to Fangs Bright Blood. There are two ways to handle the situation - either promise that you look into the case, or attack the Fangs straight away. In such a situation, you will have to win a fight of medium difficulty and you would even not need to meet up with the mercenaries, and return to Cwineth instead.

During the conversation with Fangs Bright Blood, you can use persuasion. This is possible if your reputation in Twin Elms high , or if your character has, at least, 17 points of Resolution. IN such a situation, you will be able to reach a compromise. The elf will agree to let the expedition go, save its leader, who needs to be punished. Then, during the conversation with Esmar (M57,6), you can mention this and use persuasion to see the plan through. 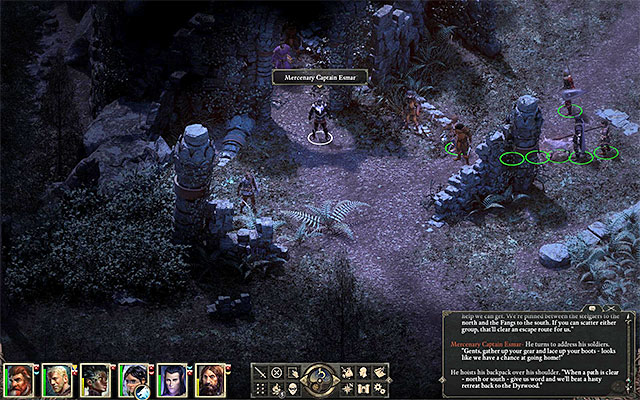 The expedition members are by the destroyed tower

The surrounded mercenaries are by the destroyed tower (M57,6). Here, you need to meet up with Captain Esmar. Also in this case, two options are available - you can either offer to help the mercenaries get out of the plight, or attack them. If you have chosen the former, head South to eliminate the Fangs (M57,7) or North to deal with the monsters on the escape route (M57,8). In the latter case, you would have to defeat a group of spotted stelgaers and you need to watch out the mot for the adult ones, which are the strongest. If you have chosen to attack the mercenaries, after you do, apart from Esmera, deal with the enemy mage and rogue, as quickly as possible. Then, return to the Fangs and report to Bright Fangs Blood about the completion of the task.

If you have helped the mercenaries, regardless of the way in which you did it, finally meet up with Cwineth again (M57,2). You will be rewarded with the Dungeon Crawler skill.

After you meet up with Anamfath Bethwl in The Passage of the Six, (M36,4). In the building, find Ridai and talk to him, to learn that the Glafanthan would like to know what happened to his missing bother Fiorm. Leave the building. Before you reach the village, travel to Elms' Reach. Find Arthwn in front of the entrance to the Hall of Warriors (M37,4) and talk to him, to learn that Fiorm has decided to lead his life in exile. 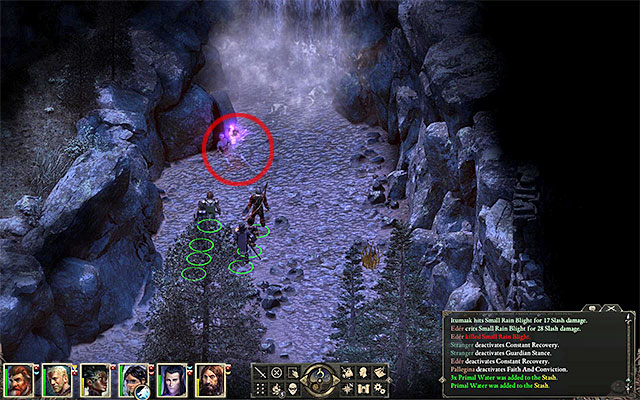 The place where you find Fiorm

Only now, head towards Northweald. Explore the central part of the location, i.e. the area around the waterfall (M57,9). Find the dead Fiorm - you will be able to touch his soul and see the vision. Now, head towards Sentinel Ridge (take the eastern or the Western path) (M57,5). Deal with the group of stelgaers in this area (watch out for the adult ones) and see the corpse of the great one. Again, touch its soul, thanks to which you will see the actual course of events.

You can now return to The passage of the Six in Hearthsong. Talk to Ridai and walk over to the chamber where there is Anamenfath Bethwl. Share the information with the people there, on your findings. After the meeting, talk to Anamfath again, who will reward you with an unique sword.

While reporting on the events in Northweald, you can pick lies, each time. Thanks to which, you will gain Arthwn's favor, who gives you a rare bow, after the meeting.