Defiance Bay is the largest city in the game and one of the elements that make it different from the rest of the locations is the presence of three different factions-House Doemenel, The Knights of the Crucible and The Dozens. You can complete quests for those factions. At first, each one of them is neutral towards the party, but this may change, with time. By completing a quest for the representative of a given faction, you gain positive reputation with that faction, but this may thwart your relationship with the rest of the factions. This is especially true for the Knights of the Crucible and the Dozens, who hate each other. Therefore, at the beginning of your visit to the city, it is recommended that you meet with the representatives of all factions to learn about their worldviews and check out on their initial quests. Then, you should take your decision on which one to ally yourself with, and remain with them until the end of the game, by striving for the best reputation with them. Note - receiving a quest from a faction does not mean automatic consent to ally yourself with that faction. You usually receive reputation points at the end of each quest.

Your selection of the factions affects, predominantly, the type of side quests that you receive. Apart from that, you can gain access to unique items or traders. Also, it is worth adding that after you progress to the later part of The Hermit of Hadret House main quest, you will have to ask for help from any given faction. If you have ignored the faction issue at first, it is in this point into the story that you will have to choose to make closer friends with, at least, one of them. To learn the details on completing this specific quest, see the page The Hermit of Hadret House - main quest.

Below, you can find information on the HQs of each of the factions, their leaders and quests that initiate cooperation with them. 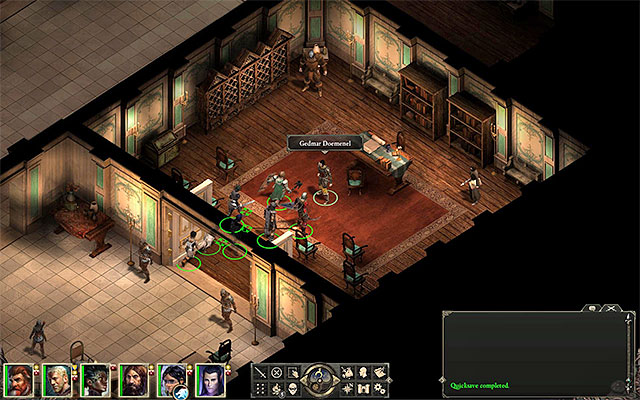 House Doemenel's HQ is in Brackenbury. Precisely, this is the Doemenel Manor (M20,3). One of the first quests from this faction is A Two Story Job and it assumes that you meet up with Abrecan Doemenel. Apart from that, you can also receive a small quest Hard Feelings from Bricana Doemenel at the first floor of the building. After you have gained enough reputation with House Doemenel, you can meet up with Gedmar Doemenel, who offers more quests for to party. 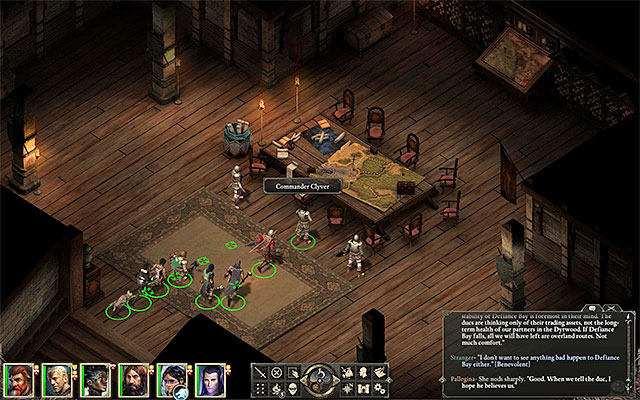 The Knights of the Crucible are housed in First Fires. More specifically, it is the Crucible Keep (M22,1). One of the first quests that you receive from this faction is Built to Last and you receive it directly from the faction leader - Commander Clyver. Apart from that, you can complete Missing Sentries (tasked by Wyla next to the training grounds) and Unwanted (you need to collect the wanted notice from the keep). After you have completed Built to Last , you can receive more quests from Clyver. 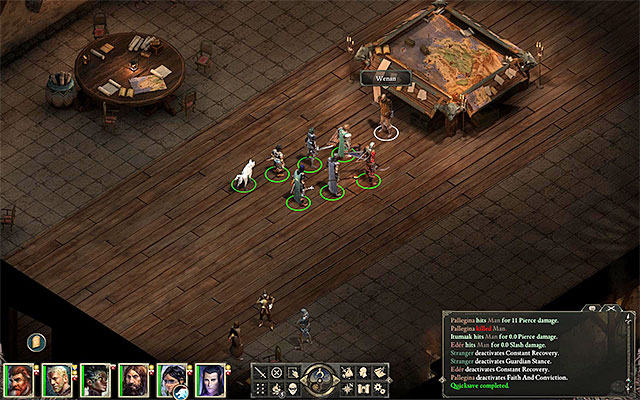 The Dozens are in Copperlane, i.e. the location that you visit right after you reach the Defiance Bay. They are occupying the Admeth's Den Expedition Hall (M18,5). One of the first quests connected with this factions is the Rogue Knight, which you receive from Osric. It is trifle long, but after you complete it, you will be able to meet the leader of the faction - Wenan - in the Admeth's Den and receive more quests from him.