This quest appears in your journal after you have invited Kana Rua into the party (M12,9) and it is concerned with finding a tablet with holy scriptures, by that party member. First of all, meet with Maerwald in Endless Paths of Od Nua (Level 1) (M14,1). After you kill the mage, examine the magic barrier at the first level of the dungeon (M14,3).

To complete this quest, go to the seventh level of the Endless Paths. First of all, find the Old copper key in a small room (M47,5). With the key on you, go to the room, where there is Garbannos - the scholar that Kana Rua is searching for (M47,8). Kill the skeletal mage, pick up the tablet from the table. Kana will speak to you. After the conversation, the quest ends automatically.

After you return to the first level of the Endless Paths, you will be attacked by a group of assassins sent by the Leaden Key Brotherhood. You should have no problems defeating them, there are a mage and two fighters there, only.

NOTE! You need to have Kana Rua on the party, while completing this quest.

You can receive this quest after you have completed The Old Watcher main quest. Again, meet Steward in the grand chamber of the Caed Nua Keep (M13,1). From her, you learn about the titular master below and to get to him, you will have to fight your way through the levels of the Endless Paths of Od Nua.

Your objectives for this mission update for the first time, while you are examining the huge statue head, at level 4. It is an optional phase of this mission. The first task you need to perform is at level 6, where you need to open the door (M46,3). This is connected with The seals of the endless paths quest. After you open the door, your journal will be updated.

The next update takes place at level eight, after you have completed the quest for the Fampyr (M48,1).

The second-last step that you need to take is getting to level 14 of the Endless Paths and talking to the Od Nua Spirit (M54,2). From him, you learn that it is him the build the entire complex and that currently, he is not the one that rules it. There is something much mightier down below. You need to get there.

At level 15, you meet the adra dragon. During the conversation, you have to options. Either kill him or convince him to move to another place. The former is faster, but the adra dragon is incredibly powerful. Even with the party developed to the highest level possible, you will have problems defeating him. Not only does he deal immense damage, but also there is no limit to the range of his attack so, regardless of how far away your mages are standing, they will take damage. 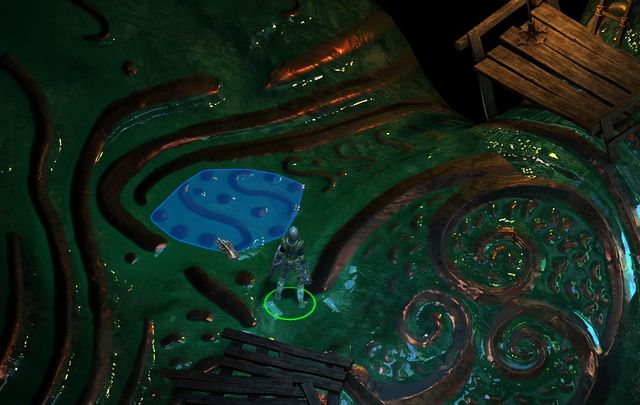 Place the amulet in the titan's hand.

A much better solution is to convince the dragon that he should leave his den. During the conversation, try to convince him that the place will soon run out of adra anyways so, it is a better way out if he leaves. The dragon consents, but you will have to help him. He gives you The dragon's amulet, which you need to infuse with his soul and put around the neck of a powerful being, for the soul transfer to complete. For this, go to the first level of the Endless Paths and walk onto the palm of the titan (M14,7). Place the amulet on his hand. After a while, it will fill with the dragon's soul.

Now, you need to go to Falanroed, the famous dragon slayer, on whose neck to hang the amulet. She is standing next to the shrine of Galawain in Black Meadow (M11,2). Place the amulet around her neck. You will still have to fight her, which is not going to be too difficult. After the battle, the Adra dragon enters her body and leaves, after a short conversation. Return to the last level of the Endless Paths. Search the treasury (M55,3), past the location, where the adra dragon stood. You find several thousand gold and several valuable items, there.

Instead of placing the amulet around Falanroed's neck, you can tell her the truth. The amulet breaks then, but she will teach you Scale-breaker talent in return, which considerably decreases accuracy and all defensive statistics of the dragon. Now, you need to return to level 15, of the Endless Paths, and defeat the adra dragon. IT is not going to be much easier, even if you use that skill.

The Blade of the Endless Paths

This quest appears in your journal automatically, after you find and collect the broken blade from the cottage of Xaurips (M42,4). Your task will be to find the remaining fragments of the blade, all around the Endless Paths.

The second fragment of the sword, the ornate sword hilt, is at level five, of the Endless Paths, in the secret chamber (M45,2). To get inside, you need to enter the Stealth mode and click on the switch on the wall. This opens the door. The hilt is in one of the heaps of gold.

The third fragment - the broken blade - is in the secret chamber at level 9 of the Endless Paths (M49,2).

The fourth fragment - the polished pommel stone - is at level 12 of the Endless Paths in the cave in the Southern part of the location (M52,2).

After you have completed all of the fragments, you need to re-forge the weapon. For this, go to First Fires, to the Crucible Keep (M22,1). In the Western part of the building, there is blacksmith Dunstan whom you ask to re-forge the sword.

During the conversation with the ogre Thulgr (M43,1) you learn that he is ashamed of what his kin has become. You need to put an end to their despicable practices and eliminate their leader - Zolla.

She is staying in the encampment to the South (M43,2). Next to her, there is one more ogre so, you will have to fight them both, at a time. Try to make use of your mages' offensive spells. After you defeat her, loot the corpse for the Zolla's torc and return to Thulg.

From him, you will obtain the Rundl's Finery - a very good light armor for your mage. Right after that, Thulgr leaves.

Seals of the Endless Paths

This quest will be automatically added to your journal, after you take the bloodstone overseer seal from the chest in the destroyed library (M44,1). 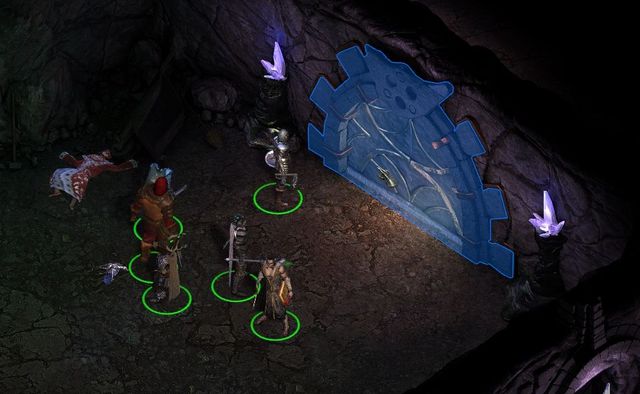 After you have found all three seals, find and click the door.

Click the door. There are three slots, in which to put appropriate seals. Note that to the right of each slot, there is a symbol - eye, chisel and sword. To find out which seal goes with which symbol, you need to enter your inventory, find a seal and right-click it. In the description, you learn what symbol is etched into it. 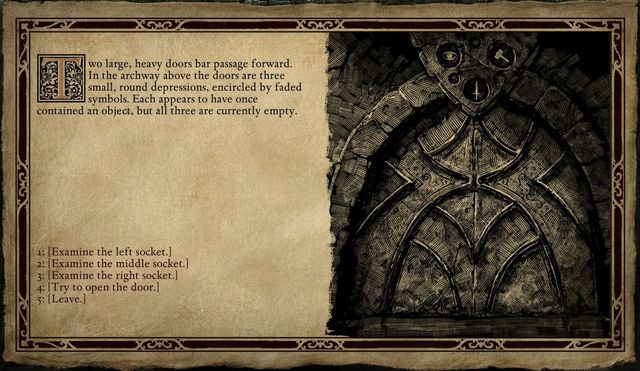 While putting the seals into the slots, pay attention to the symbols.

With all three seals in their places, open the door.

You receive this quest from Tcharek (M52,1). He is a Vithrack, who is researching into the uses and ways to shape adra. The answer is, most probably, at one of the lower levels, you need to explore them and discover the secret. 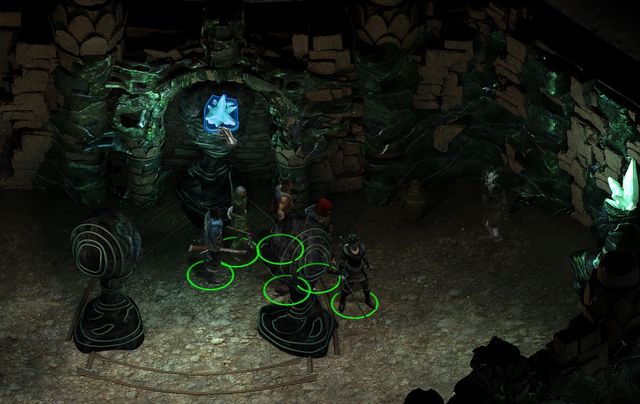 From the small altar, collect the Gleaming adra fragment.

Go to level 13 and find the room with adra (M53,2). On the small altar, you find a gleaming adra fragment. This way, you obtain one of the three items that you need to complete this quest.

The second item - the engwithan machine part is in the Western part of the location (M53,3).

You find the last item in the cave to the North (M53,4). Kill Caen Gwla and the adra animants. The item - the adra shell - is next to the armor in the Northern part of the chamber.

Now you need to return to Tcharek (M52,1). As soon as you return to level 12, you will be accosted by Kestorik (M52,3), who demands that you give him all the items. To avoid the fight, you need to lie to him and yell that you have not yet found everything; or have at least 15 Intellect, 16 Resolution or 18 Dexterity. Also, you can start a fight, which should not be too difficult. What is important is that you focus on Kestorik. When he is low on Endurance points, you will have to choose, whether to take him prisoner or kill him.

Talk to Tcharek. From him, you receive 2000 gold and a very good dagger - Drawn in Spring. If you demand more, you also receive several gems.