Entrance to ruins
You start here. Entrance is dependent on chosen bridge. The lower entrance is the main one and the upper entrance is an alternative one.

Stairs connecting both levels of ruins.

Stairs connecting both levels of ruins.

Stream
Thanks to stream you can shorten your way back.
If you have 16 Condition you can find treasure.

Place where you flow up after swimming in the stream (08)

Cliaban Rilag Ruins is a minor location within Cliaban Rilag. There are two levels of this location. You can complete one of the main quests here - Through Death's Gate. You will encounter many opponents and also find many traps. It should be noted that you can walk around some of the opponents, without engaging in a fight.

Here, you start your exploration of the ruins. Depending on your choice, you will be starting next to one of the entrances. It does not make much of a difference - the paths come together after several meters.

In this room, there is one of the strongest opponents in the game - Adra Animat. Also, there are several regular animats here. Kill them, plunder the corpses as well as the entire room and you will find several valuable items.

The main hall connects all of the rooms on this floor. On both sides, there are doors that you can open with high level of Mechanics. If this is not an option, you need to find the Engwithan key (M33,5). You can use it to open the door in the ruins.

Kill the Spectre, collect the Engwithan key from the pond, thanks to which you open all the doors in the ruins.

Watch a short cutscene. Approach the statue and touch it. Talk to him, thanks to which you will complete one of the main quests.

Thanks to the stream, you can shorten your way back considerably. Additionally, with Constitution at the level of at least 16, you can find a treasure. You need to grab on to the edge of the tunnel. Then, you will have to choose who to send ahead. Send the character with the highest Constitution. The treasure that you will find is the The Rose of Salthollow - a two-handed morning star, one of the best in the game. 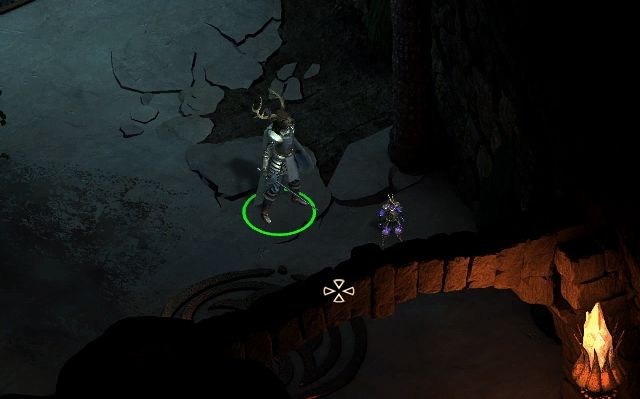 In the Animats' Room, you will find the Tiny Animat, who is going to follow you during the game.

You can open this room with Mechanics at level 7 or with an Engwithan key (M33,5). Inside, there are two animats that you need to kill. From the weapon stand, take the item Tiny Animat. He plays the role of a pet and he will follow you around the world of the Pillars of Eternity.

Troll - An opponent with high defenses and a high number of endurance points. Alone he is not too strong, but you need to be careful if he's in a group with other opponents.

Swamp Lurker - it is quite a strong opponent, although he has low resistance to attacks. It is dangerous only in larger groups.

Swamp Slime - An opponent that you need to be careful with. He does not have too many endurance points, but he makes up for that with the strength of his attacks. He can attack at range and poison your companions.

Corrupted Druid - as the name suggests, it is a Druid, that uses spells characteristic for this class. He is very dangerous over a longer distance, but has very few endurance points. Killing him should be your priority during a fight.

Pwgra - A strong opponent that uses magic. It summons all sorts of Blights, which back it up in combat.

Black Ooze - An opponent that is demanding especially due to high defenses and ranged attacks. In smaller groups, it should not be a problem.

Sporeling - A weak opponent, but you may have problems defending your mages against a group of 4-5.

Dank Spore - A strong opponent. Its most dangerous attack consists in releasing sporelings that aid the spore in combat. They attack one of the characters and make them fight on the side of the Dank Spore for some time. In case of fighting two such opponents, things may become dangerous.

Phantom - A quite easy opponent that fights directly. He has quite high defenses, but in small groups it should pose no problem.

Animat - A very strong opponent. He fights with melee weapons and uses magic to his aid. The very high defense and lots of endurance points, fortunately, does not go hand-in-hand very low with damage dealt. He may heal himself.

Adra Animat - One of the strongest opponents that you encounter in the game. Incredibly high defenses and a lot of endurance points. The only upside is that he doesn't deal a lot of damage which can easily be taken on by a shielded fighter. However, you need to watch out, because he heals both himself and his allies, which may make the fight drag on. Without strong magic attacks, it is difficult to defeat him.

Rain Blight - it attacks at range with magic. It is easy to eliminate if you can get closer. Otherwise, it can quickly eliminate your companions. It may summon smaller Blights.

Will-O'-Wisp - not too dangerous of an opponent. Its attacks may wreak some havoc to your ranged party members and mages, but it has so few endurance points that it will probably not even manage to attack you.