While talking to Medreth (M29,1), you will learn that she is looking for an Orlan female Nyfre. Presumably, she stole from the Doemenel family. Your task is to find her and bring her back to Medreth. Note - if your reputation with the Doemenel family is bad, you may not receive this quest.

Nyfre can be found on the first floor of the Dracogen Inn (M29,4), in the first room by the stairs. While talking to Nyfre at the inn, you can simply attack her and kill her. Remember to search the corpse. She has a very good medium armor - Night-Runner, which adds +2 to sneaking and +1 to Resolution. Remember to return to Medreth (M29,1). You will gain reputation with the Doemenel family and receive 1000 gold.

You can tell Nyfre to go east where it is safe. You will receive 750 gold for that. You need to return to Medreth (M29,1). Now, there are two options. If you tell her that you let Nyfre escape, you will have to fight Medreth and two of her companions. From the corpse, you will collect 1000 gold. You can also lie and say that Nyfre managed to flee and escaped northwards; however, if you don't have 14 Resolution, Medreth will not believe you and you will have to fight her.

If you have Resolution at level 16 you can tell Nyfre to see Medreth, as originally assumed by the quest. If you fail to meet this condition, there are two remaining options for you to choose from: either attack Nyfre or let her escape.

A guard on the bridge close to the Windmill (M29,2) will tell you that Lord Harond is in the village. His daughter, Lady Aelys, has gone missing. First, you should go to the Dracogen Inn (M29,4) and talk to Lord Harond. You will find him quarreling with the innkeeper. After the conversation, approach him and ask him about the situation. Unfortunately, the Lord knows little about the event. You need to ask around the village to get additional information.

Information that you need to obtain:

Go to the Ogre's Cave in Dyrford Crossing (M30,2). According Trygil, this is where Aelys should be. Explore the cave and watch out, especially for the Spider Queen. Unfortunately, after you talk to the ogre, you will learn that none of what Trygil said was true. As for the ogre himself, you can choose whether to fight him or not.

You can return to Trygil (M29,5) and tell him what you have learned from the ogre. Immediately after that, he will attack you. You will have to defeat him, which should not be too difficult. Unfortunately, this will not lead you to Aelys, because Trygil does not have any note or key on him. If you do not want to fight Trygil, you can resume your search for Aelys right after your encounter with the ogre. 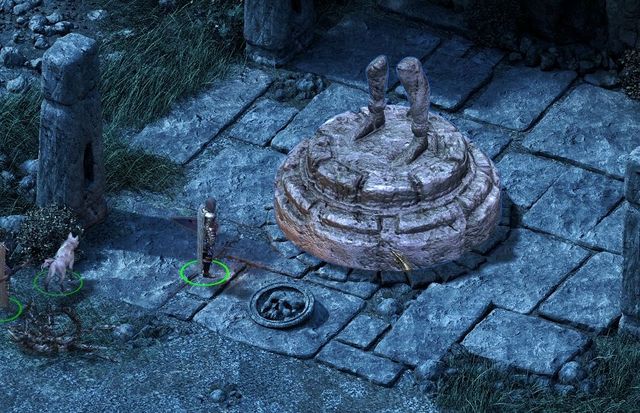 Return to Dyrford Crossing (M30). In the center of the location there is a temple entrance (M30,1). There are several ways to get inside:

While in the temple, first go to the Crossroads (M31,2). Along your path, watch out for traps and several Skaen cultists. On the crossroads, you will have to choose. There are three options:

As soon as you make it to the other side, you will need to find an Old dungeon key. It will let you open the main door to the temple. It is in one of the rooms of the Skaen cultists (M31,3) and it is locked in a chest.

Once you have the key, go to the very center of the Temple of Skaen (M31,6), open the door and approach the Blood Pool. While talking to the pool, you will be able to sacrifice one of the party members. As a reward, you will receive the Effigy's Resentment talent: The name of the party member, e.g. Effigy's Resentment: Kana. This Talent provides a permanent bonus to statistics, but the exact characteristics depend on the party member that you sacrifice. Usually, it is +1 to one of the character's statistics and several points to one of the defense statistics. Important - You can't sacrifice any of the nameless adventurers you've hired while staying in one of the inns in the game's world. It has to be a "primary" party member.

Go to the Library now (M31,7), right past the Blood Ritual spot. On the table, there is the Crypt's master key.

You can now go to the Crypt (M31,8). Open the door with the key you've found. As soon as you enter, a cutscene featuring the Skaen cultists will start. Some sort of a ritual has just been performed on Aelys. Priest Wymund will tell you that Aelys is not Lord Harond's daughter, but his niece. What's more, he has a child with her. To complete this quest, you do not need to fight with Wymund. It is enough to let Aelys go.

You now need to return to Lord Harond (M29,4). If you have 7 Mechanics, you can take the shortcut (M31, 4). During the conversation with Lord Harond, you have several options:

With Mechanics at level 7, you can go to Trygil's Curriery (M29,5) and open the door into the underground. This way, you will avoid having to defeat dozens of opponents and crossing the rest of the locations. 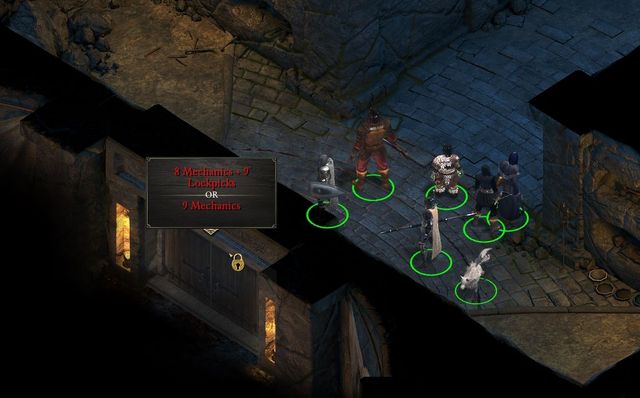 Thanks to high Mechanics, you can avoid crossing the entire temple.

With Mechanics at level 9, you can avoid crossing the entire temple. You simply need to open the door next to the entrance to the temple (M31,1).

While talking to Wymund, if you allow the Grieving Mother to "enter" Aelys's mind, you will start a fight with Wymund and 4 other Skaen devotees. The fight will be very difficult, because each opponent uses magic and has a lot of endurance points. Plunder Wymund's corpse to find Wymund's key which you can use to open the chest in the northern part of the room. Aelys may survive in this scene or she can die. If you weren't able to rescue her then you can immediately return to Lord Harond found on the upper floor of the inn and choose one of the following options:

You will achieve the same effect, if you break Aelys' neck.

If you've managed to prevent Aelys from dying then you will have a chance to talk to her after the fighting is over and to suggest her where should she go.

Rumbald (M29,3), a farmer in Dyrford Village, has a problem with an ogre that abducted his herd. Your task is to find the ogre, kill him and deliver his head to Rumbald, as a proof of his death.

Trygil, the owner of the Curriery, (M29,5) will tell you that the ogre is probably to the east of the Dyrford Village. Go to Dyrford Crossing and find the Ogre's cave (M30,2). The Ogre is in the south-eastern part of the cave.

During the conversation with ogre Korgrak, you will learn that it was him who ate Rumbald's pigs. If you want to complete the quest, you need to attack the ogre. Plunder the corpse to take Korgrak's head.

Now, return to Rumbald (M29,3) and show him the severed ogre head. This way, you will gain reputation in Dyrford Village, and receive 600 gold as well as a piglet, as your pet. You can refuse to accept the money, but you will gain nothing from it.

During the conversation with Korgrak, you can make him leave the cave and go elsewhere, where he will not be bothering the villagers. This way, you will avoid the fight. What is interesting, you can offer him a position in your Keep. To recruit him, however, you need to have barracks built and hire him as a regular mercenary. However, you will need to explain your decision to Rumbald.

While talking to Hedyna (M29,6), you will learn that she requires some ingredients to brew potions. Additionally, she would like to get a highly valued ingredient - a Drake egg. Your task is to find one and deliver it to her.

In order to do that, you will need to go to the Ledge in Dyrford Crossing (M30,3). As soon as you come close, you will be accosted by Sevis, a leader of a group that also searches for the egg. To continue your search, you will have to defeat them. First of all, focus on the mage, then the ranged opponent, and finally on the fighters. The fight should not be too challenging. Remember to plunder their bodies, because they have quite valuable items on them.

The egg is to the north-west of where Sevis was standing, on a small ledge. Click on it:

Return to Hendyna (M29,6). You will gain reputation in Dyrford Village, 600 gold and several alchemical ingredients.

If you have resolution at level 13, you will be able to convince two opponents to flee during the conversation with Sevis. It will make the fight much easier.

You can also pay Sevis to leave. The price is 800 gold.

You will receive this quest once you have talked to, and accepted into your party, the Grieving Mother (M29,6). Your task is to learn about the past of the new companion. The first thing that you need to do is to question the Grieving Mother thoroughly. However, you will not learn much.

The Grieving Mother should be in the party for the whole time. After a while, you may experience additional visions, which may take weeks, or even months of the in-game time. As soon as you gather more information, talk to the Grieving Mother, but pay attention to which dialogue options you pick. You may anger the mother and she leaves the party. You will then not be able to include her into the party again.