Temple of Berath
Main quest: "Through Death's Gate" - Meet with Harbinger Beodmar in the temple.
Side quest: "Cat and Mouse" - Talk to Medreth (you can find this person near a bridge).

Rumbald's House
Side quest: "A farmer's plight" - Talk to Rumbald.

Dracogen Inn
Inside the inn you can rest, hire help and complete several quests.

Trygil's Curriery
Inside the building you will find Trygil - Leather armours and belts trader.
The passageway to the Dyrford Ruins can be unlocked while exploring them (the main entrance to the ruins is in Dyrford Crossing - M30) or by killing Trygil.

Winfrith's arms and armory
Inside the building you will find Winfrith who sells weapon, armour and tools.

M31  Entrance to Dyrford Ruins (hard to get to at first).

Dyrford Village - description and map of the location

Dyrford Village is the second village that you visit in Pillars of Eternity. It is situated between two big cities - Defiance Bay and Twin Elms. While exploring the location, check out all of the buildings. You will find all necessary traders; you can also take rest there and hire adventurers. In Dyrford Village, you can receive several side quests, and you will also find a new potential party member - the Grieving Mother.

Main quest: Through Death's Gate - Meet with Harbinger Beodmar at the temple

Side quests: Cat and Mouse - Talk to Medreth on the bridge.

Side quest: A farmer's plight - talk to Rumbald.

After you talk to the innkeeper, you can rent a room, replenish your supplies or hire a new adventurer.

On the ground floor you will find Sid who will tell you about a legend saying that there is a powerful staff hidden in the walls or in the floor of the inn. As it turns out, the legend is true. The staff is under a plank in one of the rooms on the first floor. To find it, you need to enter the sneaking mode. Apart from the staff, there are several locked chests and containers at the inn. The most difficult lock requires 6 lockpicks and 5 points of Mechanics, or 6 points of Mechanics. 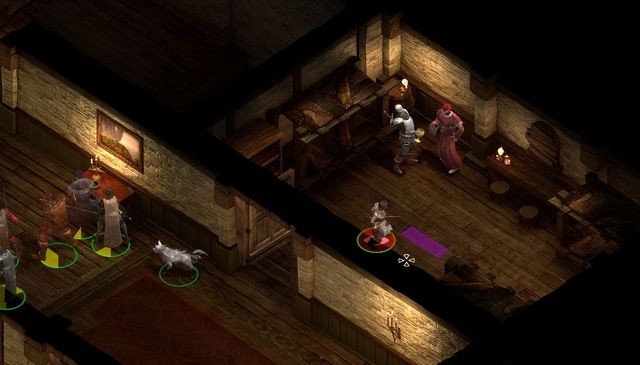 The spot where the staff is hidden.

On the first floor of the inn you will find Nyfre, an Orlan female in hiding, who is wanted for the Cat and Mouse quest. You will receive the quest from Medreth (M29,1).

Inside the building you will find Trygil, the owner. He trades in leather armors and belts.

There is also a passage to the Dyrford Ruins there (M31), but to use it you will need 7 points of Mechanics and you will have to defeat Trygil.

Hedyna is standing by a small cart next to her house. She can sell you crafting materials.

South of the house, you can find a potential party member - Grieving Mother.

Side quests: Dream and memory - talk to the Grieving Mother.

Inside the building, you will find Winfrith, who deals in weapons, armors and tools (grappling hook, hammer and chisel, prybar, lockpicks).

Quests that you can obtain in Dyrford Village

Side quests: Dream and memory - talk to Grieving Mother (M29,6).

Medreth (M29,1) - A representative of the Doemenel family. He is looking for the Orlan Nyfre.

Hedyna (M29,6) - She sells potions and alchemist ingredients. She is looking for a dragon egg.

Nyfre (M29,4) - The Orlan female hiding in the Dracogen Inn.

Winfrith (M29,7) - The blacksmith that sells weapons, armors and tools.

Trygil (M29,5) - The curriery owner. He deals in leather armors and belts.

Lord Harond (M29,4) - A nobleman from Defiance Bay, whose daughter has gone missing.

Sid (M29,4) - A client of the inn who tells you about the staff that is rumored to have been hidden in the floor of the inn.

Other important information in connection with Dyrford Village

It is not necessary to attack Trygil at the curriery to gain access to Dyrford Ruins. Just as well, you can wait for the party to reach the main entrance to the ruins in the Dyrford Crossing (M30,1).

Do not attempt to steal the items on display while in the main part of the village. You can be easily spotted by guards and, as a result, lose your reputation. If you really want to steal something, use the sneaking mode.