This quest appears in your journal automatically, after you collect a letter from the desk. The letter is the Edict of arrest on Eorn. He is in the Crucible Keep (M22,1) in the central room of the complex. It is the same room as for the Rogue Knight quest. 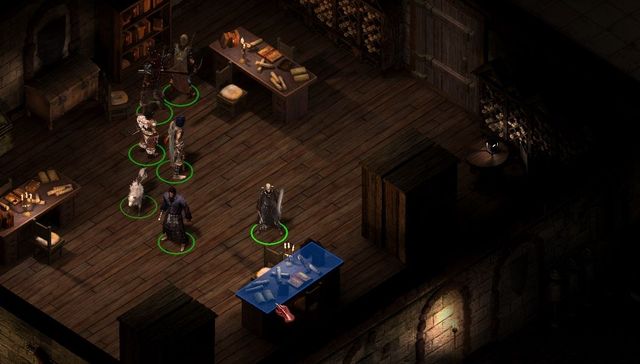 The location where you can find the letter that activates the quest.

You can learn from your journal that Eorn should be somewhere around the city. To learn more, talk to Justiciary Aldmar (M22,1) who is the butler at the Crucible Keep and can be found by the entrance. He will tell you that you should go looking in the Catacombs (M19,3). It turns out that Eorn, by accident, killed one of the Crucible Knights in defense and they want him dead now. While talking to Eorn, you can either attack him straight away, or try to convince him to appear before the court. The latter option will result in a fight anyways and in a subsequent death of Eorn.

You now need to return to to Crucible Keep in First Fires (First Fires, 1). Say that you have found Eorn and inform Justiciary Aldmar that you have also killed him The Justiciary can be found by the keep entrance. You will gain reputation with the Crucible Knights and earn 250 gold.

If you have sympathy for Eorn's situation, you can let him walk, or even give him 300 gold to move out of the city.

You receive this quest from Wyla by the training grounds, in the south-eastern part of the Crucible Keep (M22,1). She has a problem with one of the districts of Defiance Bay - Heritage Hill (map M24). Some time ago, her sentries started to go missing there. You need to get there and find the missing troops.

They can be found in the Tomb to the north of the location (M24,3). Inside, there are 4 sentries and Leyra. She is a ghost, but she still thinks she is alive. If you have Resolution at the level of 13 you can talk one of the sentries into joining your side. Not only will you avoid the fight, but also he will help you fight his companions. The fight is not that easy and the sentries are highly resistant to melee attacks, so try to cast offensive spells. Also, remember to plunder the tomb in the center. Just watch out for the trap that it is secured with.

Now, you only need to return to Wyla (M22,1). Your reputation with the Crucible Knights and in Defiance Bay will increase, and also you will also receive 1000 gold.

You receive this quest after you talk to the Commander in Chief of the Crucible Knights - Commander Clyver. He is in the council room in the northern part of the Crucible Keep (M22,1). He will tell you that he works in collaboration with blacksmith Dunstan on creating steel knights that will do the job of humans. To continue their work, they require results of certain research, which you need to find.

The research is conducted by Vianna, who was last seen in the Scriveners Dormitory (M18,8). You will learn from Coren that Vianna left to see her friend in w Ondra's Gift.

Vianna is in the Abandoned House (M23,3). Further in the building, in the room to the left, you note that Vianna is accompanied by Dodwyna - a representative of the Dozens. She wants to intercept Vianna's research results in order to thwart the plans of the Crucible Knight. Regardless of the dialogue option that you select, you will have to fight with three opponents. Attack Dodwyna in the first place, because she wields magic. You need to take the research results from the corpse of Dodwyna. Vianna will be thankful for saving her life.

Now, you need to return to the Crucible Keep (M22,1) and hand the results over to Dunstan, the smith in the Western part of the complex. He is not too happy with the idea of creating steel knights, but he starts working. After a while, you will be able to see the results of his work. You will gain reputation with the Crucible Knights and in Defiance Bay.

After you complete this quest, you will be able to select the Crucible knights as your faction.

Aranroed can be found at the pier

You need to go to Anslogs's Compass (M7 - map), i.e. the small seaside location to the south of Gilded Vale. Go to the pier (M7,6) and meet with Aranroed. The conversation will be interrupted by Padebald and a group of Mercenaries. Start fighting and try to eliminate the enemy mage and the archer first. Only then, deal with Padebald and, finally, with the rest of the fighters. After the fight, talk to Aranroed (positive reputation with the Crucible Knights) and leave this location.

Head back to the Crucible Keep in First Fires (M22,1). After you approach the keep, it will turn out that it has been attacked. Eliminate the steel knights (it is a good idea to take them out one by one, because they are rather tough) and enter the keep. You need to kill all the remaining enemy knights inside. It is convenient that many of them are already engaged in fights. After you secure the entire keep, meet with Commander Clyver again (positive reputation with the Crucible Knights and in Defiance Bay).

Talk to Fyrga in Ducal Palace (M22,4). She is in the temple in the eastern side of the complex. She is concerned about the situation in the city, but she had a vision telling her that there is an item in a temple that can help her deal with the situation. Your task is to find that place and bring the item to her.

To know what you are looking for, you first need to go to Admeth's Den (M18,5). There, find Wenan, at the entrance, and ask him about the cave. He will tell you that it is situated in the Searing Falls. You now need to go to the Cave (M26,1). As soon as you are inside, reach its very end. At first, nobody will bother you. You encounter a large drake there - Cail the silent. The fight is quite difficult because, not only is Cail a strong opponent, but also he is backed up with two young drakes and several Xaurips. First of all, focus on the Young Drakes, then deal with the Xaurips, and finally the drake himself. Keep your eyes on the Endurance bar, at all times, especially for the magical party members and ranged fighters.

From the corpse of the drake, collect the Burning Stone. Loot all of the corpses and find the container with treasure, at the end of the cave. Watch out, because it is trapped. With the stone on you, you can return to Fyrga (M22,4). While returning the stone to Fyrga, you can pick from among several options: