During the conversation with Thristwn (M20,2), you will learn that he wants to retrieve a necklace from his partner in crime.

That partner is a woman called Serel, who now works at the Salty Mast (M23,5) in Ondra's Gift. To meet up with her, you need to pay 1000 gold to the owner of the brothel - Maei. She is at the ground floor of the building, whereas Serel is at the first floor. You can buy the medallion from Serel for 6000 gold. Now, you only need to return to Thristwn (M20,2) and give the item back to him. For this, you will receive 2000 gold and an increase in reputation in Twin Elms.

You can refuse accepting the money from Thristwn, thanks to which your reputation in Twin Elms goes even higher up.

The Changing of The Guard

You can receive this quest after you have returned the gem to Abrecan Doemenel (M20,3) in A Two Story Job quest. You receive it from Gedmar Doemenel at the upper floor of the manor. Accepting this quest means joining the Doemenel family as your faction, which is an irreversible decision. 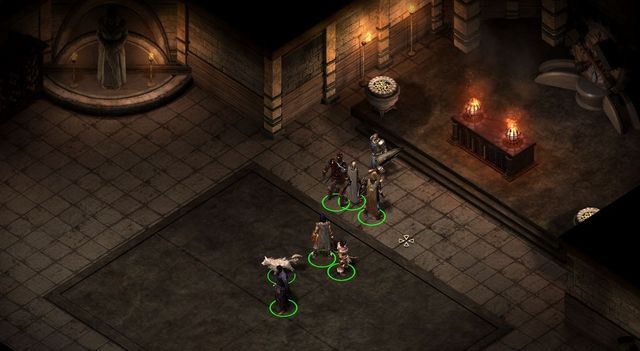 Wenfeld is in the western part of the Crucible Keep and he is a quite demanding opponent.

Marshal Wenfeld is in the Crucible Keep (M22,1), in the temple in the Eastern part of the complex. He is praying in front of the altar. Every now and then, there is a guard that enters the room. Wait for the right moment and only then attack Wenfeld. He is a quite strong opponent, but with a sufficiently big party, you should have no problems with defeating him.

After the fight, approach the nearby altar and leave the Dozens Token on it. You can now return to Gedmar Doemenel (M20,3). You will gain quite a lot of reputation with the Doemenel family. You will be allowed to pick your reward: gold, a powerful weapon (a high grade dagger) or a favor in the future.

You can follow Abrecan's request and choose not to plant the Dozens Token. Eventually, Gedmar will not hold this against you and the reward will remain the same.

To receive this quest, you need to talk to Bricanta Doemenel (M20,3) at the first floor of the manor.

Your task will be to teach Kolfecg a lesson. He can be found in Ondra's Gift in his house (M23,2). During a short conversation attack Kolfecg and kill him. After your return to Bricanta, she will be happy to hear that the mission was successful and she will trade with you from now on.

You can let Kolfecg flee the city. After you return to Bricanta, you can lie to her and tell her Kolfecg is dead, and the reward will be the same as if you killed him.

Instead of killing Kolfecg, you can simply beat him up. Bricanta will be just as pleased.

During a conversation with Nedyn (M20,5) you will learn that she requires a manuscript of a certain Pandrgam to continue her work. Unfortunately, nobody wants to give her access to the document. Your task is to go to the Hall of Revealed Mysteries (M18,9). As soon as you get there, your journal will be automatically updated and your next step will be finding the ancient archives. The archives are in the same building, in the western side. However, you need to get the key to enter, which is in possession of Grimd in the same building. To obtain it from her, you need to complete the Parable of Wael quest.

Grimda gives you the Key to the elder archive. Go to the Western part of the Hall of Revealed Mysteries. Pandrgam's Theorem is in the chest, at the very end of the room. Watch out, because it is trapped.

Now, return to Nedyn (M20,5). From her, you receive 500 gold and the Ring of eternal funding , which returns 5 gold to you, per each round in your keep.

After you get to the Hall of Revealed Mysteries (M18,9), you can tell Grimd that Nedyn wants access to the Pandrgam's Theorem. As soon as she learns about this, she will do everything in her power not to let this happen. This way, you complete the quest and receive 200 gold, and your reputation in Defiance Bay slightly increases. 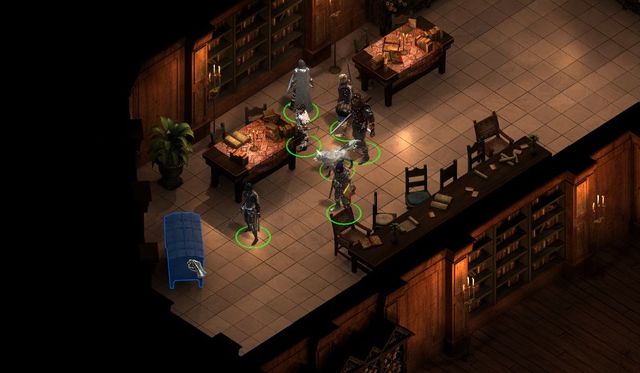 Watch out for the trap hidden in the chest.

You can activate this quest by talking to Kurren in the Hadret House (M20,4). He can be found in the war room and you should know that this conversation may not be available if you didn't begin the Hermit of the Hadret House main quest. The first part of this quest will be about talking to several people in various parts of the city. Naturally you will be allowed to meet them in which order you desire so you don't have to follow this guide exactly.

The first person is in Brackenbury so you don't have to leave this district straight away. Search the area by the fountain located near the Hadret House and find Elcga. Make sure that you question the woman thoroughly by choosing all of the available dialogue options. The next district you must visit it Copperlane. Here you should talk to two people. Start off by finding Lumdala near the theatre (M18,12). Once you're done with that conversation proceed to the market area and locate Lora (M18,3). Just as before you must take part in a full conversation (it is very linear so don't worry about your responses). You may now go to the Ondra's Gift district. Once you're there enter the Salty Mast brothel (M23,5) and locate Oly. Listen to the conversation with this character during which Lumdala will be designated at the top suspect.

Return to the Copperlane district and meet with Lumdala again. Present your accusations. Once you're done talking to her find Kadal near the theatre and talk to him as well. Kadal will ask your party to meet with him in Lumdala's House and it's located in the northern part of the map (M18,7). Enter the building and initiate a new conversation with Kadal, receiving a key from him as a result of this meeting. Use the key you've just obtained to open a nearby door. Enter a new room and locate a hidden staircase. The stairs will lead you to a previously inaccessible part of the Catacombs (M19,9). Make sure that you explore the secret room in the catacombs very thoroughly so that you'll find an item that belonged to Kora and you'll be treated with a new vision. Lumdala will soon show up here - you can attack her (aside from her you would also have to defeat five of her helpers) or you can listen to her proposition involving Lord Gaderman and allow her to leave. If you've chosen the second option you will receive 1000 gold. No matter how you've decided it's time to exit this place - use the stairs again or find a secret switch leading to the main part of the catacombs.

You may now return to questgiver - Kurren from the Hadret House (M20,4). The conversation with Kurren will be different depending on if you've killed Lumdala or not and what type of a report you've presented to him. He will give you 3000 or 4000 gold.

If you didn't murder Lumdala in the catacombs and if you've listened to her proposal then you can end this quest in an alternative way and this means that you must locate Lord Gaderman. He can be found near The Charred Barrel inn in the Brackenbury district (M20,2). Initiate a conversation with Gaderman and agree to the plan of framing Linette. Gaderman will give you 1000 gold and a silver ring. You must now go to Kurren. Show him the ring and accuse Linette of committing all of the murders.