The Man Who Waits - main quest

You receive this quest automatically, once you complete the Never Far from the Queen main quest, i.e. after you have seen the vision in the Temple of Woedica in the Catacombs under Copperlane (M19,8). Exit the temple and ask any of the Justiciars that you meet about the place full of madness. You will be pointed to the Sanitarium in Brackenbury (M20,5). After you enter the Sanitarium, talk to the Head Warden Ethelmoer (M21,1) about a member of the Leaden Key Brotherhood member. Ask Audmer, in one of the nearby rooms, about the member. Then, take the stairs to the lower level. (M21,2). 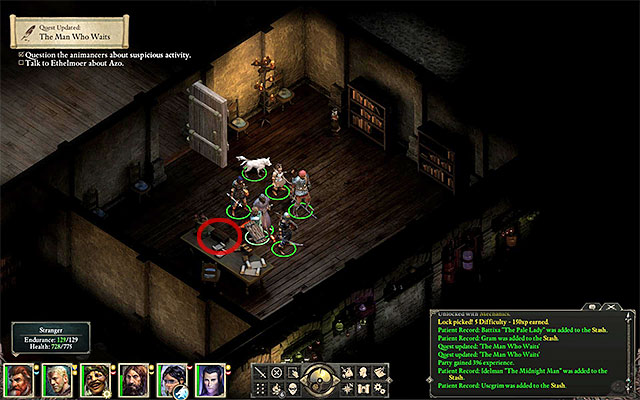 The locked chest with patient records

After you reach the animancers' laboratory (M21,3), meet with the three NPCs in the nearby rooms - Bellasege, Moedred and Riply. Apart from that, in the room in which Riply is, you can pick the lock on the chest (it requires 5 points of Mechanics) and take four patient records from it. You can also open the crate and take the Note from Azo. After you have collected enough information, return to the Head Warden. After the conversation, you gain access to the patient ward. Return downstairs and take the passage that has been locked. (M21,4).

Enter the main hall of the patient ward (M21,5) and talk to Freyol, who tells you where Caedman Azo is. You can find the man in the nearby lab (M21,6). As a result of this meeting, you will receive a key. Take it to the door to the North Ward (M21,7). Enter the ward (M21,8) and start by talking to Gram, while touching his soul. Then, walk over to the cell at the end of the corridor and touch the soul of Uscgrim, who turns out to be the Brotherhood member you are looking for.

Uscgrim takes to his heels so you have to head back to the stairs leading to the upper level. (M21,2). Unfortunately, along your path, you will have to fight several opponents. First of all, watch out for the Flesh Constructs and for Gram, Battixa and Idelman who dash out of their cells. Keep pushing forward. After you return to the upper level, meet the Head Warden Ethelmoer again.