You receive this quest automatically, once you complete the Never Far from the Queen main quest, i.e. after you have seen the vision in the Temple of Woedica in the Catacombs under Copperlane (M19,8). Exit the temple and leave Defiance Bay. Head towards Dyrford Village located south of the city. Again, cross the Aedelwan Bridge and Woodend Plains. Take the eastern exit from the plains to travel to Stormwall Gorge and complete your journey towards Dyrford Village (another eastern passage). 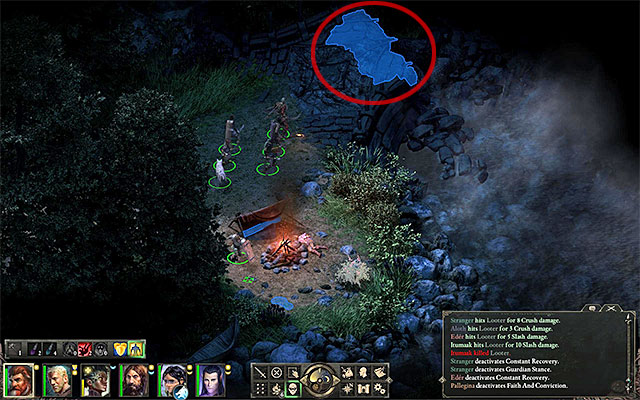 After you reach the village, enter the Temple of Berath (M29,1) and meet up with Harbinger Beodmar. He will share with you the information on Cliaban Rilag Ruins - this is your next destination. Take the north-eastern exit from the village to reach Dyrford Crossing. Here, take the northern path to Cliaban Rilag. You need to enter the ruins; there are two ways to do this. The first variant is taking the main entrance (M32,1). It is guarded by Sleafhota, a Glanfathan warrior and a Glanfathan hunter with a tamed wolf. You would have to defeat them all before you could enter. The second variant assumes that you reach the destroyed bridge (M32,2). On your way there you can be halted by looters that are easy to defeat (M32,3). It is risky to cross the bridge, because the characters with low Athletics could get injured and, as a result, they will start the exploration of the ruins weakened.

Regardless of the path that you take, you start the exploration of the Cliaban Rilag Ruins in the eastern part (M33,1). You do not need to explore the entire ruins - instead, focus on finding the stairs to the second level (M33,2). It is better to take the shorter route below, although there are several traps there. Along your path to the stairs, keep eliminating the monsters and try not to attack too many at a time. In the first place, kill pwgras and druids that wield magic, as well as animats, who use various spells in battle. In the last chamber, try to deal with the dank spores as quickly as possible and make sure that you do not spring any traps by accident. 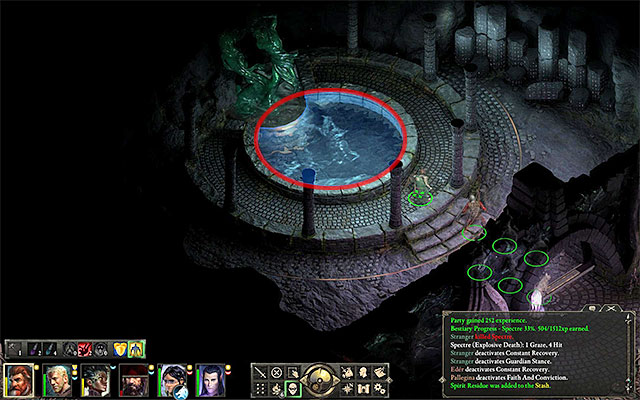 The spot where you find the Engwithan key

Your first task on the second level of the ruins is to reach the main hall (M33,4). If your character has a high level of Mechanics (at least 6 points), you can open the nearby door. Otherwise, go and find the Engwithan key, which is in the chamber in the northern part of the ruins (M33,5). Along your path, watch out for more traps and eliminate specters and animats. In the chamber with the key, there is also a slightly stronger shadow to defeat. Examine the water reservoir and fish out the key.

Use the key on any door leading to the main hall. Eliminate the Rain Blights here and reach the stairs (M33,6). Thanks to this, you will get to the part on the first level of the ruins that had been inaccessible so far. Approach the huge Engwithan machine (M33,7) and interact with the nearby statue, which will result in a new vision.

Finally, leave the ruins. You can return along the same path or interact with the nearby stream (M33,8), which would transport the party westwards(M33,9). It is especially recommended, if there is a party member with at least 16 points of Constitution. In this case, you can grab on to the edge of the tunnel, after you jump into the stream, and find a valuable treasure.