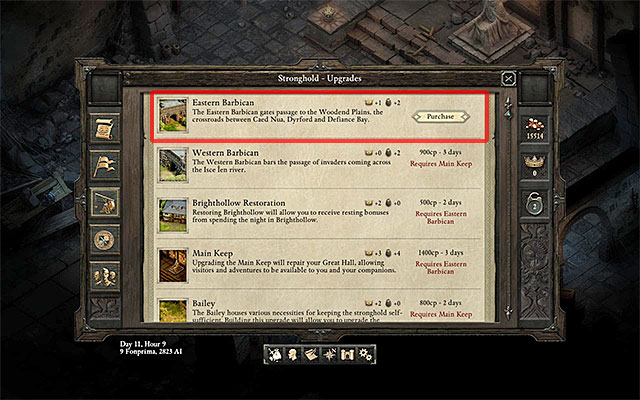 You receive this quest right after you have completed The Old Watcher main quest, i.e. right after you have dealt with Maerwald in the Endless Paths of Od Nua (Level 1) (M14,1). Return upstairs and meet the Steward in the Great Hall (M13,1). She will tell you that you have become the master of the keep and that you can assign first restoration works. First, select the Eastern Barbican from the list. The restoration of the barbican is immediate. Thanks to this, you gain access to the south-eastern exit from Caed Nua (M12,8) and additionally receive prestige and defense points.

Your next task is to reach Defiance Bay, i.e. the largest city on the world map. Exit the keep and take the newly-unlocked passage to the Woodend Plains. After you get there, turn west. Reach the Aedelwan Bridge. If you want to you can ask the Justiciars (M17,1) about the location of the temple, thanks to which you will learn that you can find it in the First Fires District. Enter the city. After you get to Copperlane district you can follow the hint that you have recently received and go to First Fires. There, after the conversation with the Ghost you will discover that the entrance to the Temple of Woedica (M22,2) is temporarily inaccessible. As a result, you need you take an alternative route. It will take you through the Catacombs. The entrance to the catacombs is in w the south-western part of Copperlane (M18,13). 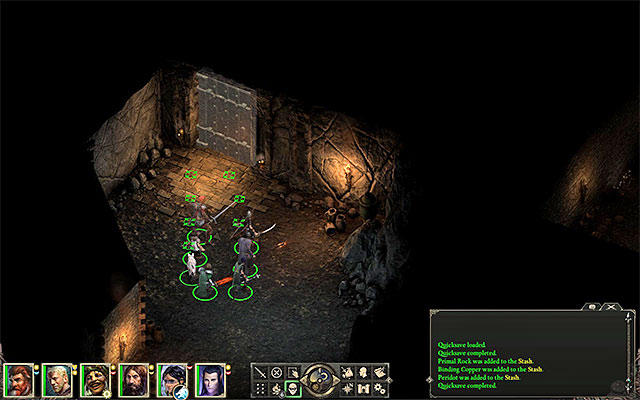 After you get to the catacombs, head south-west and be prepared to eliminate small groups of monsters along your path. You need to get to the stairs between the main level and the Temple of Woedica (M19,5). See the vision and head west. Stop at the passage blocked, among others, by Hafmacg (M19,6). You can access the temple, e.g. by bribing the guards with 350 gold, killing them, using Resolution/Intellect at the level of at least 13 points, or by putting on the Woedica Hood onto your character's head. You can find the hood in the eastern part of the catacombs, on the body of a murdered novice. (M19,4). After you have walked around the guards, you can also take a look into the chamber where Initiate is (M19,7). He also has Woedica's Hood; he will give it to you only if you agree to listen to his rehearsal and if the level of your Strength or Resolution is at least 14 points.

Your destination is the main chamber at the Temple of Woedica (M19,8). Before you come close, put on the hood that you have either found on the corpse, or got from the novice. Approach the door and confirm that you want to enter the chamber alone. Have a longer conversation with the Shrouded Woman and always pick the first answer on the list. You will be rewarded with a vision.

You can also solve things with force. Do not put the hood on and after you approach the door to the main chamber, enter with the entire party. After a short exchange of lines,, you start a fight with the shrouded women and men here. During the fight, first deal with the opponents that wield magic. After the fight, approach one of the ghosts and touch his soul.