Fragments of a Scattered Faith

This quest appears in your journal after you invite Eder to join your party (M4,1). It does not require too much involvement from you, because it involves going to Caed Nua which is already a part of the game's main storyline. You need to reach Maerwald at the Endless Paths of Od Nua (Level 1) (M14,1). After you kill the mage, exit the keep and try to leave Caed Nua. Wait for Eder to speak and start a conversation with him, which is going to be about his murdered brother.

You need to go to Defiance Bay, i.e. to the First Fires district. Head to the Ducal Palace (M22,4). At the palace, find the Records Keeper and ask for access to the archives. At first, you will be refused access. The necessary information can be obtained in two ways - use the dialogue option associated with well-developed Strength (at least at the level of 16), or wait for the party's reputation in Defiance Bay to reach the sufficient level. Once you use the special dialogue option, or you have developed your reputation, the man will give you the file. You will learn that Eder's brother died in the battle of Cliaban Rilag. Go there - it is a location near Dyrford Village, which you visit during Through Death's Gate main quest.

After you get to Cliaban Rilag, find the Looters' camp (M32,3). Approach the bandits and after a short conversation, attack them. After the fight, loot the camp. In one of the containers, you will find Raedceran Standard Piece. Listen to the conversation with Eder about the item that you have found.

Finally, you need to go to Twin Elms in the Eastern part of the world map (you can do that only after you have progressed to act III of the game). After you get there, travel to the Oldsong district and find Fangs Mind Hunter in its eastern part (M39,3). Show the artifact to this NPC and listen to the conversation.

This quest appears in your journal after you approach the Windmill (M4,5). See the cutscene and enter the building to talk to Trumbel. After you listen to his side of the story, you can agree to talk to Sweynur who represents the farmers, or try to convince Trumbel to change his testimony.

Sweynur can be found at the ground level of the Black Hound Inn (M4,2). If you have already dealt with the problem on Trumbel's side, you only have to give him the good news. Otherwise, interact with Pasca to select the option to order drinks for the farmers. Then, you can try to persuade them to soften their approach, or attack them (negative reputation). Report back to Trumbel, if necessary, to complete the quest (you can either claim your reward or refuse to take it).

This quest appears in your journal after you have spoken to smith Tuatanu in the Black Hammer Smithery (M4,6). For your search of the missing shipment, head out to the Black Meadow - you can get there through Magran's Fork or Esternwood. Examine the destroyed cart (M11,3) and the northern part of the Meadow, where a bandit camp is located (M11,1). Kill all of the opponents and check out the interactive containers to find the cargo crate. Return with the recovered shipment to Tuatanu (the reward includes gold, a unique shield and positive reputation points). 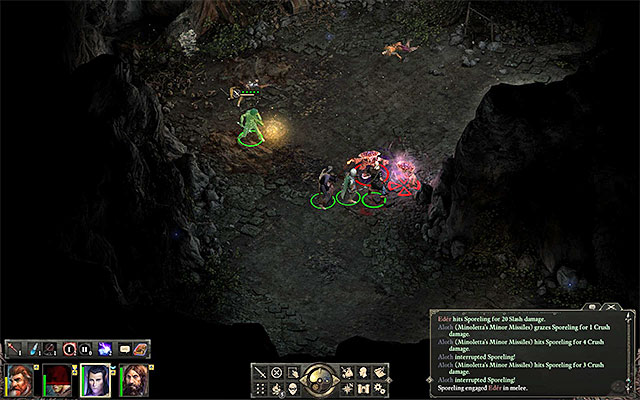 This quest appears in your journal after you talk to Aufra in Aufra's Home (M4,8). The woman asks you to meet up with midwife Ranga. Exit the house, leave the Gilded Vale and head southwards to Magran's Fork. Go through that location and again choose the southern exit to reach Anslogs's Compass. To meet with Ranga leave the Southern encampment (M7,2). Ranga first asks you to get rid of the local monsters. These are xaurips from the north-eastern camp, which are easy to eliminate (M7,3). Your second task is connected with traveling to the Sea Cave (M7,4). After you get there, attack the two Sporelings. Attack the monsters one by one and keep in mind that they deal quite a huge damage. After the battle, examine the sporelings and collect the Dank Spores. Return to Ranga with the spores and wait for her to prepare the potion (at the same time, you will learn that it has no healing properties).

Return to the Gilded Vale and meet Aufra again (M4,8). You can give her the potion and choose not to inform her about its lack of effect, or tell her that its only effect is to make the user feel better. For this quest, you are rewarded with gold and reputation points. 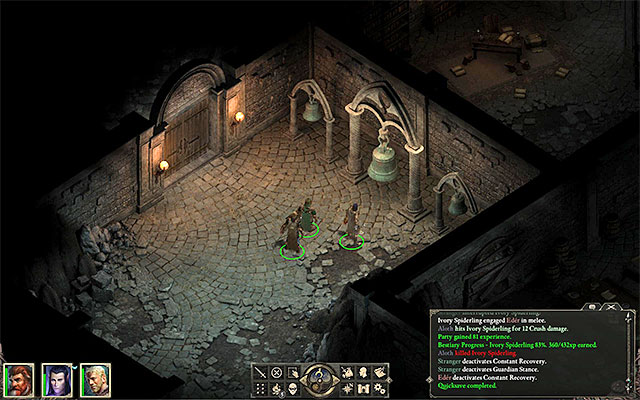 Reach the chamber with three bells

You can receive this quest after you reach the Temple of Eothas. The entrance to the temple is in the central part of the village (M4,7). Once you're inside, talk to Wirtan in the first chamber (M5,1); he's the one to give you this quest. Your first task is to reach the chamber with three bells, located in the western part of the upper level of the temple (M5,6). You can take a shortcut (the secret switch in the western chamber) (M5,2) or a longer way around. It is optional to explore the rest of the rooms at the upper level - in some of them (M5,3)(M5,5) you can receive hints for the nearby puzzle.

To complete the puzzle, you need to strike the bells in the correct order:

For solving the puzzle, you are rewarded with access to the stairs leading to the lower level of the temple (M5,7). 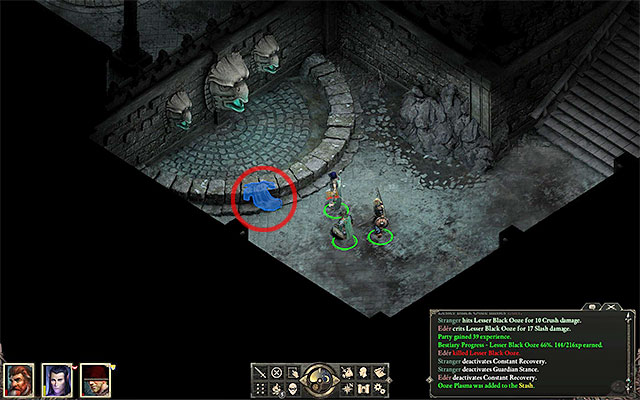 The spot where you find the silver key

At the lower level of the temple, your priority is to find the remains of the priests of Eothas. They are in the chamber in the south-eastern corner of the map (M5,12) and you cannot get there at first. The access to that part of the temple is guarded by locked door (M5,11) and without the skills to open it, you need to obtain a key first. Take interest in chamber with a group of Shadows (M5,9), which unfortunately you have to defeat. Try to eliminate them next to a narrow exit from the chamber and use traps to help you. Once you have secured the area, enter the room and turn the valve. Now, you can go south (M5,10). Kill more monsters and find the robe next to which the Gleaming Silver Key lies.

Head towards the room with the remains and eliminate the monsters that you encounter. The room with the dead priests is locked, but you can gain access by pulling the lever in the corridor. Enter the room and talk to one of the lost souls, which will allow you to experience a vision and learn about the actual events. Now, you need to go back to the quest-giver (M5,1). You can either take the same path or take the eastern stairs (M5,14) that are guarded by more monsters. Start a conversation with Wirtan. You can either claim your reward without asking additional questions or accuse the man of treachery and demand explanations. This will allow you to suggest that he should atone for his sins by burying the priests (positive reputation points). If you prefer resolving issues by force, you can attack Wirtan (negative reputation points).