You receive this quest right after you complete the Visions and Whispers main quest, i.e. once you have talked to Caldara de Berranzi by the big tree (M4,1). You need to reach the Caed Nua keep. You can use the southern exit from the village and head for the Magran's Fork or use the eastern exit and head for the Esternwood. Both of the locations lead to the Black Meadow. Take the Eastern path in the Meadow to reach Caed Nua. Head towards the keep (M12,7) and expect at least several monsters along your path (Will-O'-Wisps and Shadows, among others).

Get inside the hold. After you enter the huge hall (M13,1), defeat the nearby monsters and talk to the Steward, from whom you will learn where to look for Maerwald. Climb dwon the northern stairs into the dungeon (M13,6). Carefully deal with all the spiders in the dungeon (do not attack all of the groups at once) (M13,7) and take the passage to the first floor of the Endless Paths of Od Nua. 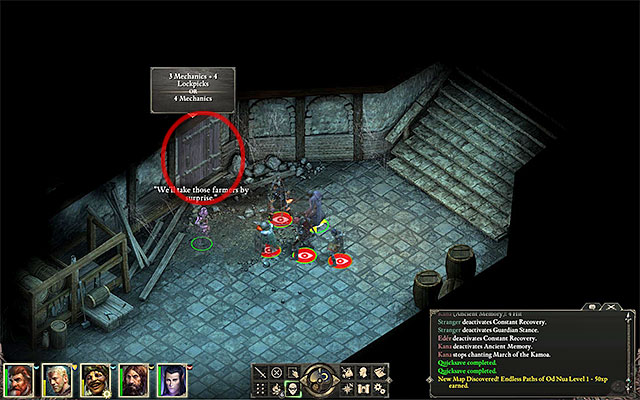 The room in the dungeon where Maerwald resides

Maerwald is staying in the closest chamber of the dungeon (M14,1). If you have appropriate skills and/or lockpicks, you can open it straight away. Otherwise, head southwards and find xuarips (M14,2). Defeat them and plunder their corpses to find the key.

After you get access to the room with Maerwald inside, a longer conversation with this character awaits you. Regardless of the dialogue options that you choose, towards the end of the meeting Maerwald attacks the party. Attack the mage and try to keep him from casting powerful spells. You should watch out especially for Maerwald's AoE attacks and retreat from the endangered areas whenever necessary. You should rely on stunning or knocking-down attacks of warriors, because they make it more difficult for Maerwald to regenerate his health.

After the battle, you will have to make a choice. You can: