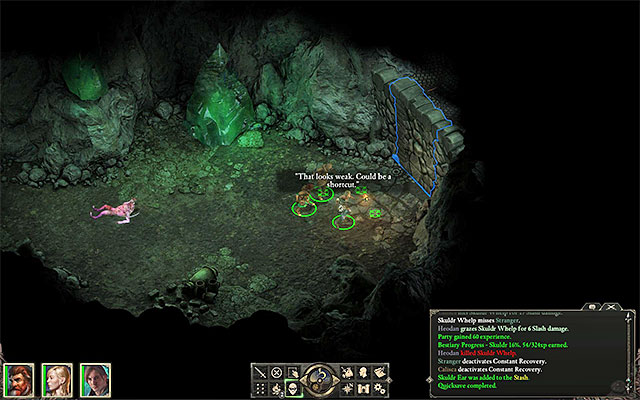 The location, where you find the weakened wall

You receive this quest right after you enter the ruins of Cilant Lis. The starting point is in the south-western part of the underground ruins (M2,1), and your goal is to exit them in the north-eastern part of the map (M2,8). There are two main paths to reach the exit. This first variant assumes that you cross the eastern part of the ruins. While traveling eastward you will encountered a xaurip and a skuldr whelp. The xaurip won't be hostile towards you at first - you can avoid contact with this creature, kill it or bribe it using the meat collected after killing the skuldr whelp. Choosing the last option will have an additional outcome - you will receive a spear from the xaurip. Soon, you will reach the exit through the final part of the corridor; however, there is a weakened wall there (M2,3), which you need to examine.

You can destroy the wall with a Hammer and Chisel; both of the items can be found in a small encampment near the starting point (M2,2). However, they are not required, because you can simply ask Calisca to help you (she is strong enough to do it). Shattering the wall unlocks the eastern passage to the farther parts of the ruins. 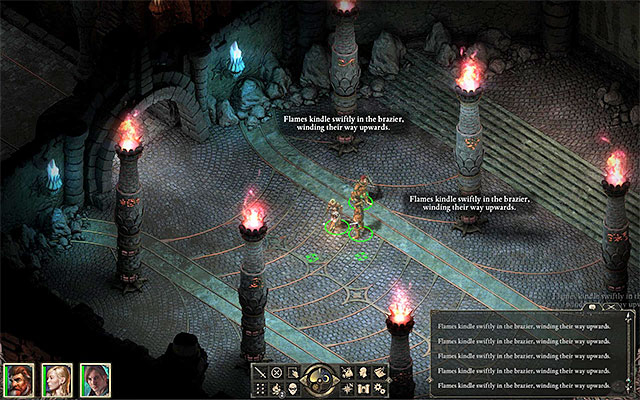 The second variant assumes that you cross the central part of the ruins. There, you can find a corridor with pressure plates (M2,7). Unfortunately, each plate is connected to a trap; if any of them is activated, your party will be severely wounded. Open the door to the left to reach the hall with six pillars (M2,5). Approach each pillar and start a fire next to the baskets, using a torch (you can find one in Calisca's inventory). 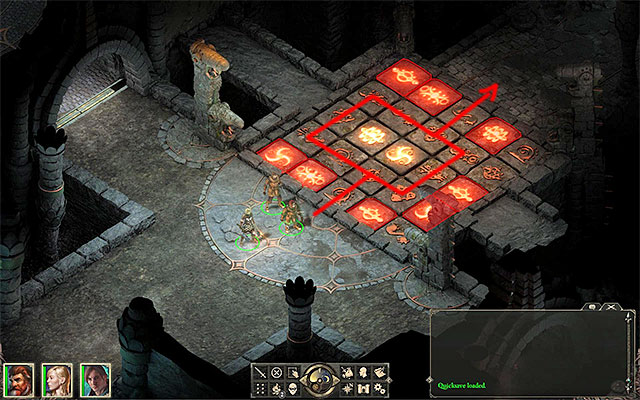 When you start the fire in six locations, return to the corridor with traps (M2,7). Activate the sneak mode there, because trap detection is one of its features. The above screenshot shows the corridor after the changes have been implemented. You need to avoid stepping on the red plates. Do not step on the two with the glowing symbols on them, in the center of the corridor. Try to lead the party members along the safe path one at a time instead of all at once.

Both of the routes described above will lead you to the exit from the underground ruins (M2,8). Kill the small spiders (Spear Spiderlings) and get to the surface. Take several steps ahead to activate the cutscene of the ritual (M2,8).