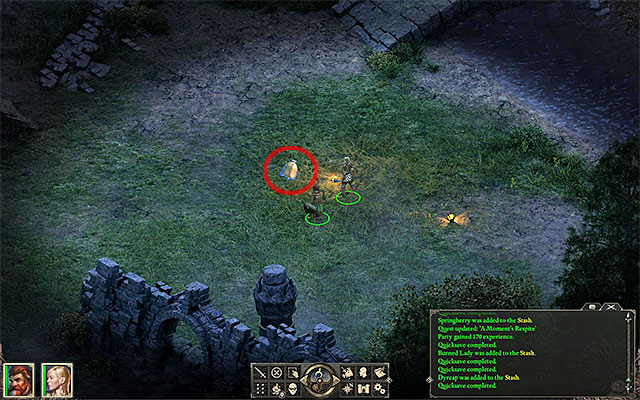 This is where you find the water skin

You receive this quest at the very beginning of the game (M1,1). Listen to the conversation with Caravan Master Odema and note that your party has been, temporarily, joined by warrior Calisca. Head west and go past Sparfel. Reach a small grove (M1,2). There, attack the Young Wolf who is not going to present a big challenge. After you win the fight, approach one of the bushes and collect the Springberries.

Right after you pick the berries, a short cutscene of the conversation with Calisca starts; its course is determined by your character's origin and background. Head south and locate the bridge leading to the abandoned western camp (M1,3). Find the Waterskin there (M1,4). Your party will be attacked by two Glanfathan Hunters. When the fighting starts, first attack the archer. After you win, plunder the corpses and head back towards the main Encampment (it is a good idea to save the game at this point!) (M1,1). On your way there, defeat one more enemy hunter.

When you reach the encampment, a conversation with the Glanfathan Leader starts and you will not have much influence on its course. You should only avoid the option to lay down your arms, because if you do, they will be removed from the active slots and moved to the inventory. Regardless of your choices, another battle starts. First, attack the leader. Once he's dead, deal with the supporting hunter.

During your meeting with the Glanfathan Leader you can choose a unique dialogue option reserved for a character with 15 or more points of Intellect. This will allow Heodan to avoid injuries since all of your enemies will be focused on you. Avoid on the other hand choosing the option of putting away your weapons, because they will be removed from your active slots and moved to the inventory (meaning you will begin the fight barehanded).

Before you leave this place, you have to make your first decision; it is connected with Heodan, whose life will be in danger. I advise against leaving him to his fate (option 3), because he will die as a result. A much better idea is to throw your own weapon at the bandit attacking Heodan (option 1). Subsequently, Heodan will survive, but your character will lose their main weapon.

If you are playing as a character with Perception at the level of at least 15 points AND if you have a ranged weapon at your disposal then you will receive a chance to behave in an alternative way (option 2). Choosing this new option will allow you to save Heodan without endangering his life and without having to lose your own weapon.

Note - The above decision is not important; even if you save Heodan, he will not stay in the party permanently.

All of the above variants end in the same way - you reach Cilant Lis. At this point, you receive another main quest - The Ruins of Cilant Lis.