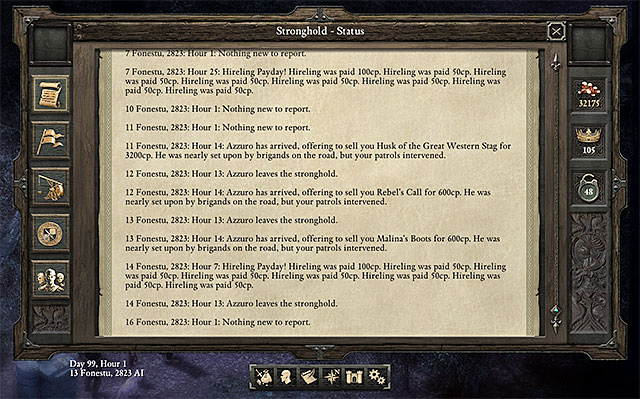 Stronghold can be managed from any place on the map. From the menu you can see its current state, recruit hirelings, build upgrades or react on events. Only if you want to change your party rooster you must get to the stronghold personally.

By buildings barracks, you gain access to hirelings recruitment. Depending on your choices during game and reputation at various factions you will have access to different mercenaries - each type gives you a bonus to prestige and safety, so you should pay attention to those parameters when recruiting. Hirelings require a onetime fee when recruiting and constant, paid every week salary, so keep that in mind when you plan your budget. You can have up to 8 hirelings at the same time and their number is partially responsible for probability of random event occurrence, such as merchant or other guest visit.

You should recruit hirelings later in the game, when you have placed most of the buildings and the stronghold generates sufficient amount of gold.

Completing quests and exploring the game's world can grant you access to some unique hirelings. You should definitely be interested in them, because adding them will give you much bigger bonuses to prestige and/or security than what you achieve with "standard" helpers. Here's a list of these unique characters:

Dozens Captain (+6 to security, +4 to prestige) - You can hire him after you've managed to improve your relations with the Dozens (it's one of the fractions in Defiance Bay). To be more specific, it becomes possible after completing The Bronze Beneath the Lake quest.

Korgrak (+12 to security, -10 to prestige) - Korgrak is an ogre and you can find him in the cave in Dyrford Crossing (M30,2). You can meet with this creature while completing A Farmer's Plight side quest and you will be allowed to invite the ogre to your stronghold.

Avenger of Skaen (-5 to security, +7 to prestige) - Recruiting this character is possible while completing the Blood Legacy side quest in Dyrford Village (M29). In the final part of that quest you will have a chance to side with the priest Wymund and allow Aelys to leave. Doing this will grant you a new hireling.

Crucible Knight (+4 to security, +8 to prestige) - You can hire him after you've managed to improve your relations with the Crucible Knights (it's one of the fractions in Defiance Bay). To be more specific, it becomes possible after completing the Winds of Steel quest.

Doemenel Thug (+8 to security, +2 to prestige) - You can hire him after you've managed to improve your relations with the Doemenels (it's one of the fractions in Defiance Bay). To be more specific, it becomes possible after completing The Changing of The Guard quest.

After you build the dungeons, you can take some characters meet into captivity. This option is usually available during combat with enemy. When his endurance drops drastically, you are given the choice whether you want to continue fighting and kill the enemy or imprison him in your stronghold (he goes to the dungeons and you continue the battle if someone is still on the battlefield).

Each prisoner has a separate cell guarded by one guard. Prisoner can be released at any time, and when you visit the dungeons you can ask jailor how a prisoner behaves. If he behaves badly, you can punish him yourself, but it will increase your cruelty - one of main character personality traits. It is not possible to talk with captured enemies, however there are unique events tied to some of them (they've been described on the next page of this game guide). For instance, you may be informed about a slaver showing up in your stronghold and wanting to buy one of the prisoners from you. In this scenario you could agree to the transaction or refuse the slaver in order to maintain high prestige.

Here's a list of the most important characters you can take as prisoners:

Aefra - This character can be found in a ruined home in the Ondra's Gift district in Defiance Bay and is connected with the Supply and Demand side quest.

Eorn - This character can be found in the Catacombs under the Copperlane district and is connected with the Unwanted side quest.

Esmer - This character can be found the mercenaries camp in Northweald and is connected with the At the Mercy of the Tribes side quest.

Gramrfel - This character can be found with a group of bandits after you return to Magran's Fork later in the game (after visiting Defiance Bay).

Kestorik - This character can be found on the twelfth level of the Endless Paths of Od Nua (dungeons located beneath the Caed Nua stronghold).

Naelde - This character can be found in the Stormwall Gorge after you've advanced to the third act and it takes part in an ambush during your journey to the Twin Elms.

Nyrid - This character can be found in the Copperlane district in Defiance Bay and is connected with the His Old Self side quest. 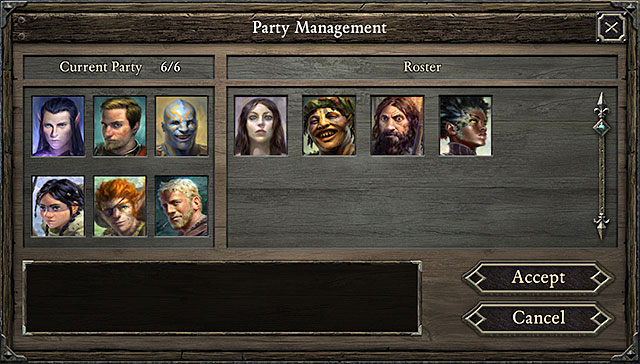 Party management window is available in two situations. First is when you're in the stronghold, where you have unlimited access to the option of sending away and recruiting companions to your team. Second is when you recruit a new companion. It might be one of characters met or someone recruited in an inn. But remember, that if you send someone to the stronghold while being in inn, he will be unavailable for a while, until he gets to his destination. You won't be able to return him to the party until he arrives, so change your rooster wisely so that you won't have to return unnecessarily to the stronghold.

As time flows, your stronghold generates income and resources. All items go to a special chest in the treasury which can be found in the northeastern part of the keep. There you will find gathered taxes, items produced by buildings (like plants) and bough from merchants. You should go to the chest from time to time and take all things. After some upgrading, at the same room a merchant shows that will buy all unneeded items.