Pillars of Eternity is a direct successor to classic RPGs. So it shouldn't be a surprise that battle is based on dozens of combinations of different factors. Such solution combined with the fact that some elements are random generated makes the battle both complex and clear. You can read about mechanics in the Journal (Cyclopedia tab, then Combat mechanics). There you will find information about how the game calculates damage, armor etc. Below some most important aspects has been described from practical point of view. 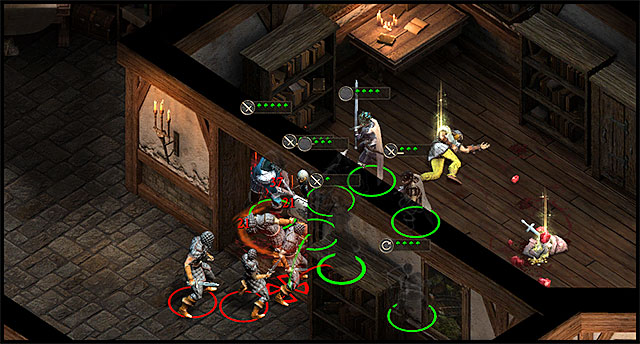 Use the surrounding to block enemies.

During the game pay attention to stats of items that you wear. In case of weapon not only the damage is important, but its type as well. All enemies have different resistance to different damage types. To avoid situations in which you can't deal any damage to enemy, you should do two things. First, if it is possible, pick weapon that deals two damage types, like piercing and slashing.

Second solution is to wear two different weapon types, like sword and a mace. At the same time you can have two weapon sets, and if you choose a specific talent, even three. During combat you can change your sets any time you want.

Remember about picking correct armor, each of them have different amount of defense points against specific attacks. Movement limitation created by different armors is important as well - the heavier it is, the more it slows you down. It means attacking and using abilities less quickly. Wear the lightest armor you can afford to, heavy armor should be used only by your fighter or paladin.

Another important thing is the order in which you fight enemies. Wizards should be your priority. If you won't eliminate them at the beginning of battle, they can quickly kill few of your companions. If you have easy access to enemy archers, eliminate them before fighting warriors. If you're facing large groups of enemies, not necessarily human ones, in first order eliminate enemies that use any form of magic. Then focus on the weakest ones and eliminate then gradually in order from weakest to strongest one. It is important to concentrate all your party on single target. Only paladin or fighter should distract other enemies.

Always keep an eye on health and endurance of your companions. Endurance shows current condition of character, it drops due to enemy attacks and can be improved by potions and spells. It recharges automatically to maximum level after each battle. The bar on the left side of character portrait shows general health state. It gradually drops each time you lose endurance. Health level is more or less 4-5 times larger than endurance. When it drops to zero, character goes into agony state. It means that if in that state it will lose endurance, it will die. Character's death is irreversible and can happen to anyone, but as long as your main character is alive you can go on. 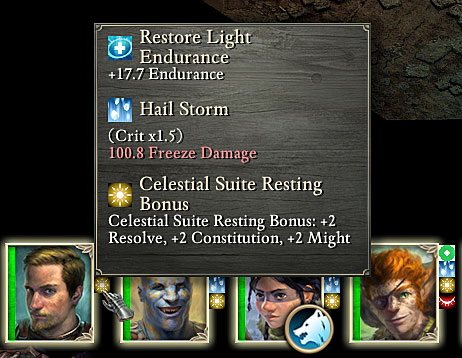 Modifiers are very important during combat. There are two groups of them: permanent and temporary. Temporary modifiers are active from few seconds to few minutes. They can be positive, like buffs given by priest or chanter, or negative, like fear or poison, and in case of some stronger attacks - bleeding or vulnerability to a specific element.

Negative modifiers can be removed in two ways. First one is simply waiting until it wears off. Second is using skills of priest or other magic class that has a spell that takes away any negative effects from your companions.

Permanent modifiers are different. An example of permanent modifier is stats boost for resting in an inn or character contusions. Resting boost is active for few days since sleeping.

Fatigue has few states - each gives stats penalties, mostly to endurance. When you reach "critical fatigue" penalties are so big that it is completely unwise to keep fighting and you should get some rest as quickly as possible.