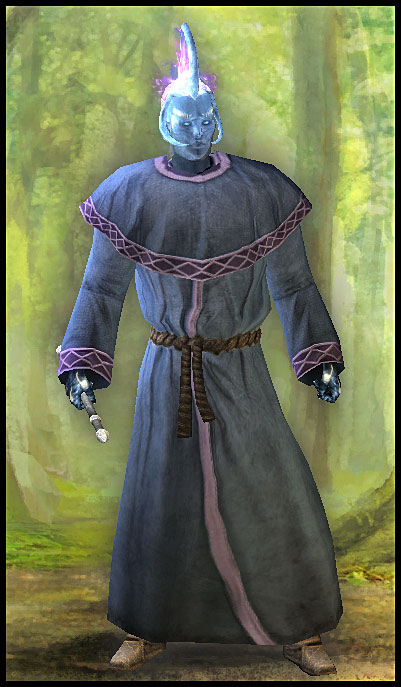 Priest is a magic class focused on spells supporting and weakening, he has no offensive ones. He has small amount of health points and endurance. He mostly wears robes and other light armors, so he doesn't have high defense. It is a character recommended for experienced players who will be able to utilize his abilities.

Priest, in addition to spells, has a special aura that has large working radius and constantly heals his allies a little bit.

Priest, just as the druid, doesn't need to learn new spells. Every second level he automatically learns all spells on that level. But there is a limit of spells casted between resting. Available spells usually have area of effect and they work positively on other party members by increasing their stats. Priest as one of very few classes has spells that regenerate endurance during combat. When you create a priest, you can choose his deity, which has role similar to paladin's order and have impact mostly on character's personality and slightly on available dialogue options.

Race - Moon godlike is a good choice as it has race ability that is very useful for priest. When character's endurance drop below 75/50/25% a wave of energy is released that heals your allies.

Deity - Deity doesn't give specific bonuses nor penalties. It only affects character's traits and the way he is treated by NPCs at the beginning of the game. You might choose from five gods:

Attributes - most attribute points should be spent on intellect, the more, the better. Intellect should have at least 18-19 points. You should increase might as well, to around 15 points. You can slightly reduce constitution and perception and saved points use on dexterity and resolve.

Culture - pick a culture that gives +1 to intellect, like Old Vailia or Rauatai.

Background - aristocrat or scholar that have +2 to lore will work best.

Ability points received each time you gain a level should be spent mostly on lore. In second order you should invest them in survival that will allow you to use potions effectively. You should improve athletics by few levels as well.

Use as light armors as possible, robes are best choice.

For normal attacks, use a wand or ranged weapon.

Keep yourself possibly far away from enemy, but close enough to be able to react quickly and, for example, heal your companion.

Don't forget about activating aura that heals your companions, and after some upgrading deals damage to enemies as well.

Most spells of priest have an small area of effect.

Use your skills wisely. Use supporting and weakening spells mostly at the beginning of battle.

Control the state of your companions endurance and cast a healing spell whenever needed.

Don't be afraid of using magic scrolls. They give you access to strong offensive spells.