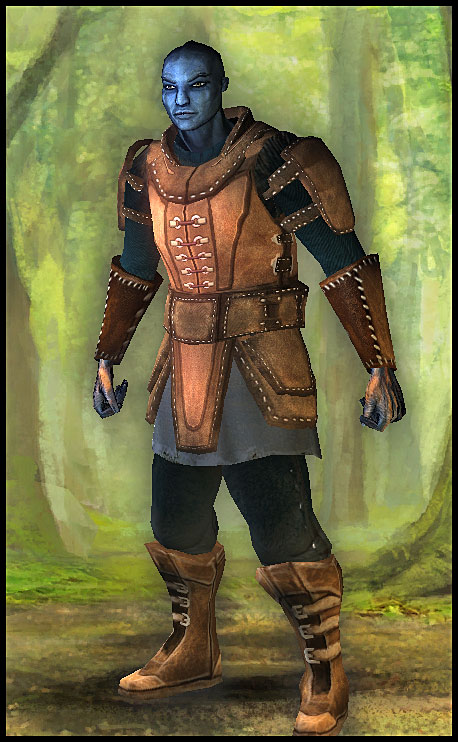 Monk is a warrior that uses only his fists in combat. His main advantage is great amount of health points, endurance and very good class abilities. You can equip him with a weapon, but then not all skills and talents will give you so good bonuses. He is quite resistant to enemy attacks, but not thanks to his armor. It's thanks to his dexterity.

Amount of received wounds can be seen on the circled red field in the right lower corner of character icon.

To activate his abilities, monk needs wounds gathered by receiving damage. Most of abilities require a specific amount of wounds. They shouldn't be saved for later, as after some time they start to weaken your character. Most of abilities focuses on dealing direct damage to enemy.

Race - any race except for orlans will be good.

Abilities - swift strikes that costs one wound and greatly improve your character's speed will be a good choice for the beginning.

Attributes - focus mostly on dexterity, increase it to around 19 points, then constitution (16 points). You can take away some points from intellect and resolve, but not more than 2 points. Use then to increase character's might.

Culture - you should choose between The White that Wends and Deadfire Archipelago. The first one gives you +1 to perception and the second one offers a +1 bonus to dexterity.

Background - athletics bonus is most important for you. You have more than one option, but slave will be best as it will not only give you +1 to athletics, but +1 to survival as well.

Monk is a very versatile character and points should be distributed versatile as well. Spend most on athletics which should be on highest level. Don't forget about survival which improve the way potions and food work. Lore might be important for monk as it will allow him to use spells from scrolls.

Remain on the second line. Attack and at the same time hide behind a fighter or paladin.

If necessary, retreat and wait until enemy focuses on someone else.

Add few ability points to lore, you can use magic scrolls during battle. Don't be afraid to use potions.

Wear medium and even stronger light armors. Attack speed is more important for you than defense.

Control the amount of wounds received and immediately use them.