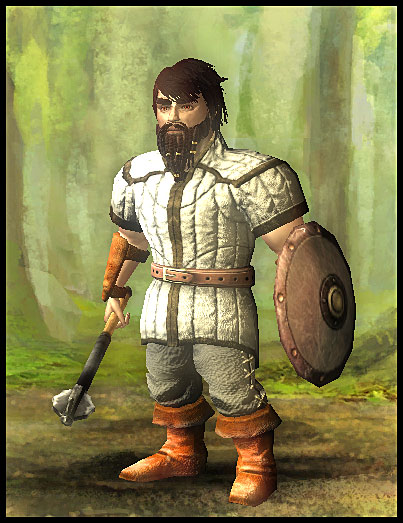 Chanter is one of more interesting classes available in Pillars of Eternity. His task is to sing phrases during combat which influence his allies and enemies. In addition to singing, he also fights in more regular way, though he has a small amount of health points and endurance which makes him vulnerable to enemy attacks.

Keep attention to the amount of chanted phrases shown in the right lower corner of character icon. Thanks to them you can use powerful spells.

Chanter can use phrases and invocations. Phrases are short verses that chanter combines into single song. Each of them take a specific amount of time and gives some profits. Songs combined from phrases are singed automatically during battle and they do not limit chanter movement in any way, so he can both sing and use a sword at the same time. Invocations are strong spells that chanter can use after singing a specific amount of phrases, usually three or four.

Race - Boreal Dwarf, with his +2 to might and +1 to constitution is a good choice. He additionally has +15 to accuracy against all primordial and wilder enemies.

Phrases - at this point you can choose two phrases. "Dull the edge, Blunt the point" that reduces damage dealt by enemies and "At the sight of their comrades, their hearts grew bold" that increase companions stats are best.

Invocations - pick the "If their bones still slept under that hill, none can say" invocation. After singing three phrases you will be able to summon three skeletons that will fight by your side till the end of the battle

Attributes - Intellect is most important from your point of view, you should increase it to maximum level. Second most important trait, constitution, should be increased by around 15-16 points. You can slightly lower might and rest of points spent on resolve.

Culture - pick a culture that gives resolve or intellect bonus. So you shouldn't choose Deadfire archipelago, The Living Lands nor The White that Wends.

Background - Aristocrat, artist or mercenary will be best.

During character development spent most points on lore and then on athletics and survival. You can add few points to mechanics as well. 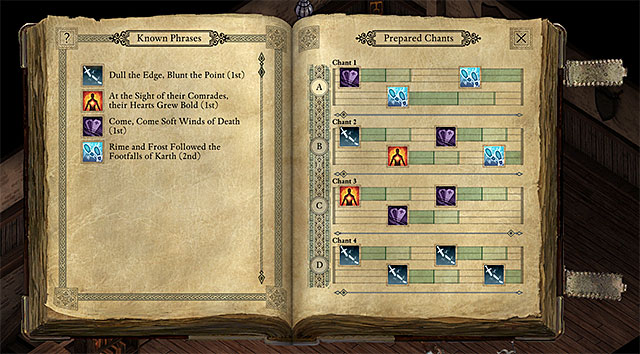 Try to create few different chants that can be used in different circumstances.

You gain access to the option of creating chants by opening the chanter portrait and then the last icon that shows a scroll with musical notes. In newly opened windows you will see all your phrases and by clicking the right mouse button you will see description how they work how long they are chanted and how long they work. The latter usually is few seconds longer than the time of chanting them, so their effects combine with each other. Number next to a phrase shows its level.

On the right side of the book there is a field with lines, like in sheet note. This is where you will place selected phrases which together will create a chant. One chant consists of not more than 10 phrases that can repeat many times. When a chant ends, it immediately starts over from the beginning. You can create four different songs that during combat can be changed, but not modified.

When creating a chant you must remember about some things. First - combine bonuses for your companions and penalties for your enemies in one chant. Avoid repeating one chant two times in a row. If you have more phrases to pick from, create few chants from which each should be useful in different situation.

Try to be very close to the center of the fight, but don't move to the frontline.

Remember to modify your chants every time you get to a new level. With each level gained you are rewarded with new phrase or invocation, so you should slightly change the chant to use character new level.

Selection of chant should depend on your position in battle. If you fight in front line, pick ones that weaker your enemies. If you more away, select chants that makes your allies stronger.

Each time you get to three or four chanted phrases, use invocation.

Use the possibility to create scrolls. Thanks to high lore level you will be able to use even the best spells, which will be especially useful at the beginning of combat.

Armor has no impact on chanting speed, so you should wear plate armor.