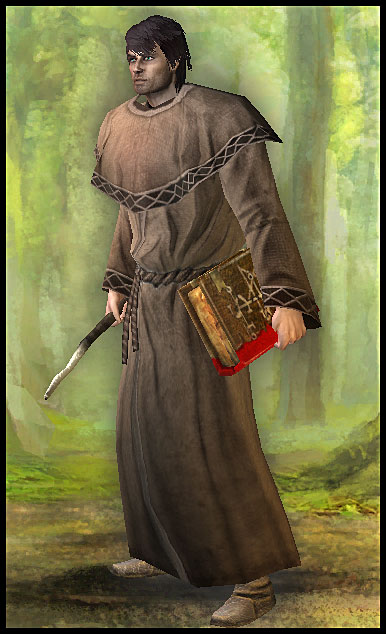 In Pillars of Eternity wizard returns to the roots of the genre. It is a class with very powerful offensive capabilities, a great variety of spells with various effects, weak defense and very small amount of health and endurance points. This class is easy to play with, but mastering it will take dozens of hours spent on character development and picking the right spells. 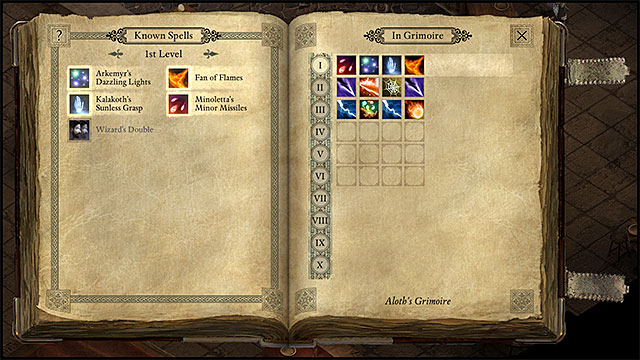 Pick spells to your Grimoire carefully as you're not able to change them during combat.

In battle wizard is using two attack types. First ones are regular attacks with weapon held in the hand. Second are spells that character has learned. They is few dozens of spells in total, divided into few levels. What's specific for a wizard is that even if he knows a spell, it must be moved to his spellbook (Grimoire). In Grimoire there is space for four spells of every level. During battle you can use only spells that are inside the book. Wizard can have more than one Grimoire, but changing them during combat makes your character helpless for some time.

Keep attention to how many spells of a specific level you can still cast.

Number on the selection bar shows how many spells of specific level can be still casted before resting. Only the level of a spell matters, not it type.

Race - Death Godlike that gives +1 to intellect is the best choice as it deals more damage to enemy that has less than 15% of health points.

First spells - You can choose four out of more than dozen spells. Best choices are:

Attributes - focus mostly on intellect and might. In second order increase dexterity. If you lack points, you can slightly lower constitution.

Skill points should be split between lore, athletics and survival. Lore should be your priority.

Use only robes, or, if left with no other choice, leather armor.

Use your spells sparingly when in battle. You have a limited amount of those and not always you can set a camp.

Keep attention to range of a spell, some you can throw from far away, others require you to touch the enemy.

Be careful when using spells! Some of them can hurt your allies.

When casting some spells with area of effect, you might see two circles. In the smaller one damage is dealt both to enemies and allies. In the space between smaller and larger one only enemies receive damage.

Interesting detail! There is an item that is very useful for wizards - The Ring of the Selonan. It increase the maximum amount of first and third level spells you can cast by 2. You can find it at the end of the cave which you can enter from the southwestern part of Pearlwood Bluff. To enter the cave you must click the large rock and use the rope with grappling hook.