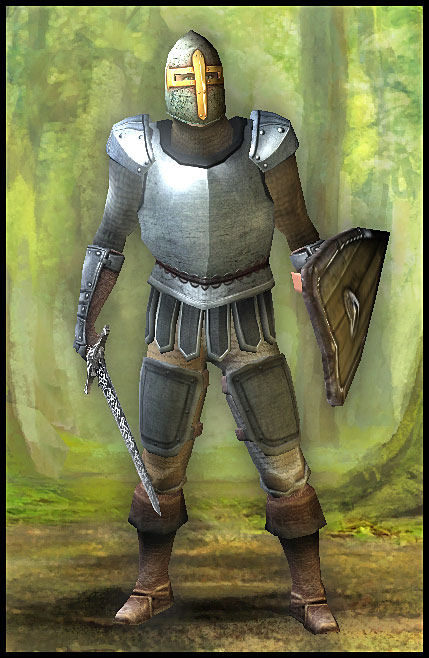 Fighter is the most versatile class available in the game, at least in close combat. He works perfectly as a warrior with shield, two-handed sword, two daggers or even spear. It is one of less complicated classes as well - learning to use him well takes least time. It makes fighter a perfect class for beginners or for those that don't know with which class they want to play. Fighter is forgiving of many mistakes and playing him is interesting since the prologue to the final quests.

Fighter have lots of health and endurance points and they also have a great defense. When he gains level, you can choose from many various skills and talents. Many of them are passive abilities that doesn't require any actions at your side, which makes them perfect for beginners or those that don't want to waste time on clicking successive skills during combat. Warrior has special attacks as well, you usually can use them once or twice. They recharge after battle.

Race - you should choose between a human and a mountain dwarf. A dwarf is slightly better as he has bonus to defense against poison and disease.

Abilities - if you're creating a defensive character, then Vigorous defense which greatly improve defensive stats is a good choice.

Attributes - invest ability points mostly in constitution (maximum amount). Then invest in resolve and rest of unused points use on perception.

Culture - select a culture that gives you resolve bonus - Aedyr or Ixamitl plains (+1 to resolve).

Background - mercenary will be a perfect choice, but any other that gives you +1 to athletics will be good as well.

When spending skill points you should focus on athletics. You should improve survival by few levels as well. As for the side abilities, improve mechanics.

You're the hardest link of your team. If you die, rest of the team has small chances for victory.

A fighter with shield should always walk first. He must focus enemy attention on himself.

During battles in tunnels try to block the passage by, for example, standing in the room entrance. Enemies won't be able to get to your companions that fight from distance.

Equip the heaviest armors, preferably plate armor. They give a 50% attack speed penalty, but it's not most important in case of your character. Invest in good shield as well.

Don't forget about enchanting ability. Improve every better armor that you gain. You should invest in overall quality of the armor.

Eat and drink! Consume something before battle, it will give you maximum endurance level. Don't be afraid to use potions during battle.

Your abilities recharge after every battle so you don't need to save them.