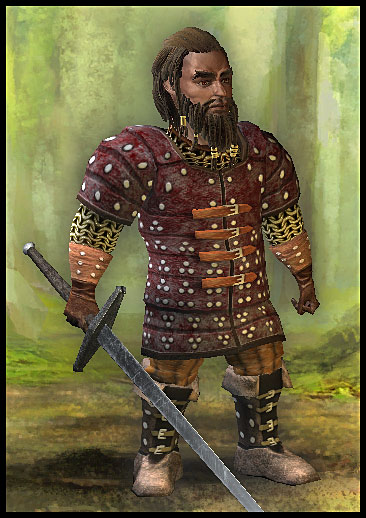 Barbarian is a class that focuses on strength more than any other in the game. He has lots of health points and endurance, low defense and average accuracy. He is best to fight many enemies at once. Best effects can be achieved when he is used together with fighter or paladin who will take most of damage on himself so that the barbarian will be free to deal damage.

Don't be afraid to use barbarian skills, they renew after every battle.

Barbarian skills can be divided into two categories - direct and supporting. Direct ones are usually a powerful attacks that additionally weaken enemy. Supporting ones are skills with area of effect that weaken enemy on quite large territory. All skills are renewed after every battle.

Race - of all available races select the island aumaua, which has +2 bonus to might and bonus to movement speed, or mountain dwarf which have +2 to might, +1 to constitution, -1 to dexterity and bonus to defense against poison and disease.

Abilities - you can choose between two abilities: frenzy, which gives attack bonus for limited time, or barbaric yell that for twelve seconds makes your enemies fear you, what makes them less effective in combat. A better choice for the beginning will be frenzy.

Attributes -for barbarian, might and constitution points are most important. One of those two attributes should have about 20 points, the second can be weaker by 3-4 points. You should improve dexterity as well. You can reduce perception and resolve (not more than by 2 points).

Culture - best choices are: The Living Lands (+1 to might), The White that Wends (+1 to perception) or Deadfire Archipelago (+1 to dexterity).

Background - decide between slave, laborer or raider. Survival and athletics are most valuable for you.

When spending ability points focus mostly on athletics and survival. Spend then more or less equally, but you can give slightly more to athletics. Pick one of two skills - stealth or mechanics and try to keep it on highest level possible.

Barbarian receive stat bonus when he fights with more than one enemy at once. Try it to be two enemies at once, when there is more of them, retreat.

Equip male or scale armor, though they give you less defense than plate armor, they less limit your movement.

Stay closely behind your tank. You must be as close the center of the fight as possible and in the same time hide behind a character that is responsible for defense.

During the battle keep attention to endurance bar of your character. If you see that it drops very quickly, retreat for few meters. Return to the battle when enemy focuses his attention on other party member.

Don't be afraid of using skills. At the beginning of battle you should use one that will weaker or scare your enemies and after that use offensive ones.