Every time you gain new level you receive few skill points that can be spent on increasing one of five skills: stealth, athletics, lore, mechanics and survival. They determine the rise of your character stats, interaction with items and new dialogue options. Your character at the beginning of the game has few points already used on skills recommended for his class, culture or background. Increasing skill by one level at the beginning costs one point and with each level is priced one point more.

Main character should specialize in lore, athletics or survival while skills like stealth or mechanics can be left for companions. 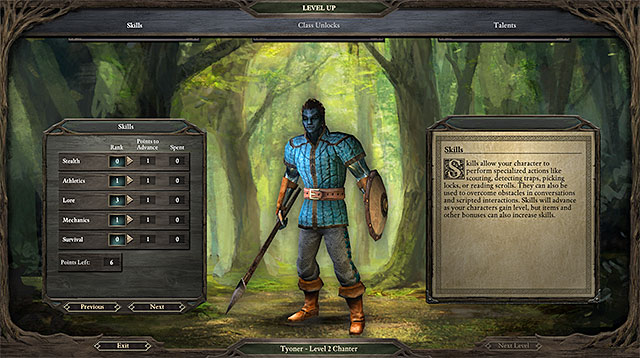 Use your points wisely. A character should specialize in only one skill.

Stealth - this skill allows you to sneak to enemy to know their position or simply pass near them. When in scout mode, it will allow you to notice hidden switches and traps that can be disarmed. At least one of your companions should have high stealth level (it's best that this person becomes a scout in your team so that he or she will be helpful in locating enemies and traps).

Athletics - the higher athletics level, the greater chance for interactions with surrounding like climbing or swimming. It allows you to travel the world longer before receiving negative fatigue effect.

Lore - high lore level gives you new dialogue options, quicker filling of entries in bestiary and the ability to use scrolls during combat.

Mechanics - one of more important skills. Allows you to open locks in doors and chests, providing access to unique treasures or to optional passageway helpful in avoiding tougher enemies. At least one person in your party should have high mechanics level.

Survival - this skill prolong the effects of food or potions. Each character should have this skill improved by at least few points.