Creating your character is first thing that you will do in Pillars of Eternity. You should give yourself as much time for it as possible. You can't change your decisions later, and they have key value for the rest of the game. Before making them, learn about available options and what profits do they give you. 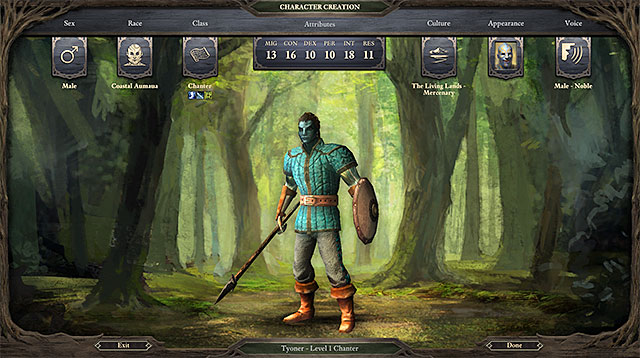 Any time during character creation you can change previous decisions without the need to completing all phases all over again.

Choice between male and female isn't important, it only determines some conversation options.

Choice of race should depend on class you have chosen. If you know your class of choice, you will be able to pick race that gives you the best stat bonuses and passive abilities. Each race have few sub-races. They differ mostly in their passive abilities, stat boosts remain unchanged. They can change the way NPCs treat your character in small degree as well.

A choice that will determine rest of your game. It's the decision that you should make most cautiously. Make your choice based on gameplay style you prefer.

Classes are divided into two main groups: melee and range fighters. First group consists of fighter, barbarian, monk and paladin. Range fighters are ranger and magic classes - priest, druid, wizard and cipher. In case of rogue and chanter you will decide in which direction they should develop.

Some classes require you to pick an Order to which you belong as well. It influence your character's personality.

Difficulty using a class is important. For inexperienced player fighter will be perfect as he doesn't require a complicated development strategy and is forgiving of mistakes. Monk and barbarian are easy to play as well. As for range characters, hunter with his animal companion is interesting. When you play for the first time, avoid using cipher, chanter or rogue. Those classes require you to spend some time on planning character development path and learning their combat style.

At this phase you must pick first abilities as well. If you still have trouble with choosing the right ones or picking a specific class, move to the further part of this guide, where you will find a short description of all classes with instruction on creating an example character.

At this point you can spend a specific amount of attribute points. You can choose from might, constitution, dexterity, perception, intellect and resolve. Game marks which attributes are most important for a specific class (golden stars) and which ones are recommended (silver stars). Pick one, most important attribute on which you will base your character and improve it to maximum level. Develop second attribute by 3-4 points less than the main one. Take some points from attributes less useful for your character and use them on recommended ones. Some attributes influence the availability of dialogue options during hard situations, for example while having high might level you can blackmail your enemies and thanks to perception you will notice their nervous behavior to know that they are lying.

At this point you must choose a territory from which your hero comes and what was he doing before. Pick the culture based on the class you have chosen. Culture should give you bonus to most important attribute for your class. On culture depends with what equipment you will start the game, but you shouldn't worry about that as it can be cheaply and quickly changed. When selecting a background, future character development is most important factor. On background additional boost to ability points depends. If you're creating a melee fighter, think about a background that gives you bonus to athletics or survival, and for a mage lore would be best choice.

Last part of character creation is to choose a portrait, modification of character head and his skin. You can also select a voice based on few available propositions, but doesn't matter too much as your character speaks only if he affirms that he understood your order.

Only thing that remains is to give your character a name and click the ""Done" button. Congratulations! You've managed to create a character with whom you will spend next few dozens of hours in the world of Pillars of Eternity.