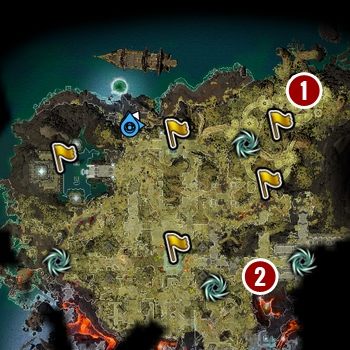 2. Temple Of Rhalic - entrance to The Cave

If you decide to support the magisters, Alexander [1] will demand the head of The Sallow Man. Alexander will also tell you that the The Sallow Man uses illusion to conceal his hideout. He also gifts the Cowl of True Sight, which allows you to lift the illusion.

The hideout is near the Temple Of Rhalic. It will be guarded by a troll named Krug [2]. You can convince it to let you in. If you don't manage to do that, you will have to kill it. Same as the trolls from the Reaper's Coast, it will have the Troll Blood status, which allows him to regenerate once every turn. You can cancel that status with Restoration. If you also have the Teleportation skill, you can just move it into the lava below.

The only thing you will see in the cave will be an altar. Unfortunately, it won't let you lift the illusion. However, use the Dispel Illusion to reveal a hidden passage. There you will meet The Sallow Man. 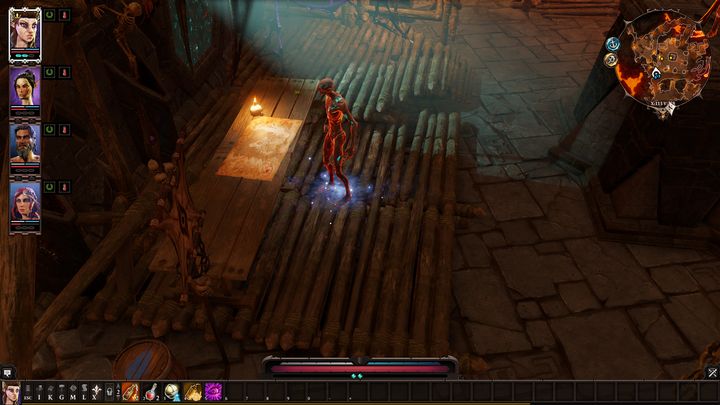 It's a tough fight. Try to keep The Sallow Man at bay, away from the team. Each successful attack replenishes some of his HP. On top of that, if his HP gets very low, he can get out of the fight for one turn and come back with some HP regenerated. His vanguards will aid him in combat.

After winning the fight, take his head to Alexander, and claim the prize.

Reward: 265050 experience points+ 4 guaranteed prizes + 1 of 4 to choose from depending on the character class