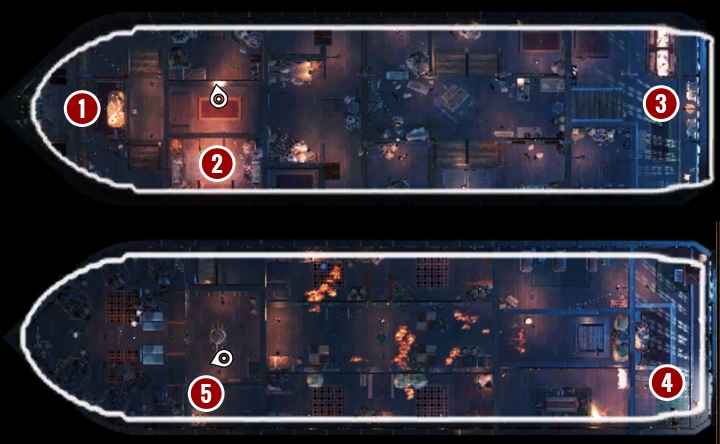 1. The Hold - start and magister Siwan

3. The Hold - magister William, Windego and the stairs to the middle deck

4. The Hold - magisters Murtof and Ricks

You begin the game as you wake up in a room, which looks like a laboratory [1]. First, talk to magister Siwan who is in the room. From him, you learn you have been captured and are now onboard the ship bound for the internment camp - Fort Joy. He will also tell you to talk to magister William. You can also try asking him about the circumstances of your capture, however he will not be so eager to tell you much. 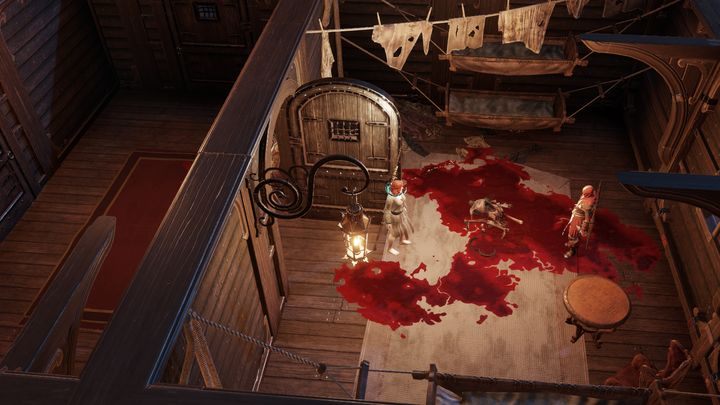 After you finish the conversation, leave the room. Consider going to the room visible in the picture above. When talking to magister Waters [2], you find out there has been a murder, and she has been tasked with finding the person responsible. You can offer your help in the investigation, however it is not very important, as you are bound to confront the murderer anyway. Make sure to search the body - you will find several valuable items.

After this meeting, go back to the previous room and try to bring around everyone left alive. Then, take the stairs to the middle deck. In the rear you will see two magisters locked in a cabin [4]. You can leave them, however inside the cabin, there are some precious items. Enter the cabin by breaking the door. If you have at least one persuasion point then after choosing the "Reason" or "Mislead" dialog options you can avoid the confrontation. In other case, you have to fight them. Use attacks that either deal greater damage or slow the enemies down - this way, the fight will be very simple, even if you continue with basic attacks.

Then go to the upper deck [5]. There, you have to fight two Voidlings - these foes are relatively simple to defeat, just make sure to keep your distance. 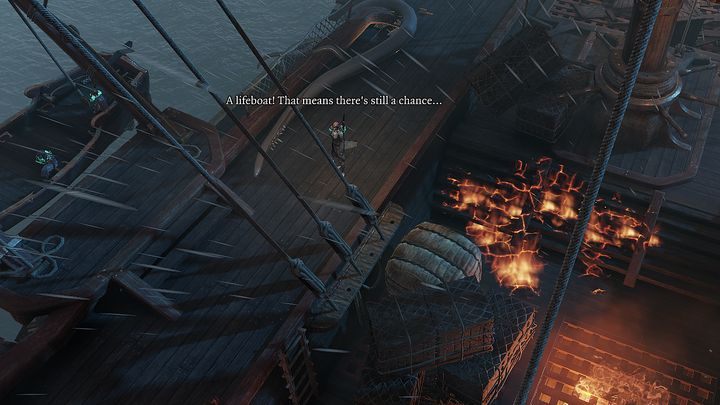 After the fight, go to the lifeboat - it is located on the other side of the ship. Talk to those onboard the boat. Finally, you are faced with a choice, which affects the ending.

When you choose this option, the quest ends right after you finish talking to the survivors. You escape immediately leaving all the other survivors onboard.

With this option, you decide to rescue the others. Go back the same way you came to the lower deck. There, you should see a sequence in which the survivors fight the worms. Once again, this is not a difficult battle. The NPCs will take care of themselves even without your help. After the fight run away with the remaining survivors and abandon the ship.

Annotation: If after the attack, you did not wake up the others, the sequence where they fight the worms might not be initiated. This will make it impossible for you to save them, thus if you do not wish to load a previous save file, your only choice is to escape.