This page of Divinity Original Sin 2 guide contains descriptions of all available civilian abilities - Personality, Craftmanship, and Nasty Deeds. We've explained how they work and prepared a list showing bonuses received after leveling them up.

The tree of civilian abilities is not too extensive, but the majority of useful abilities have been addressed comprehensively. For this reason, it should be noted that in t the character creation process, or for any character at the first experience level, there is only one point that you can spend on an ability of this type. What is even more, thanks to the strict division between combat and civilian abilities, the game somewhat forces you not to ignore the area that this chapter has been devoted to. 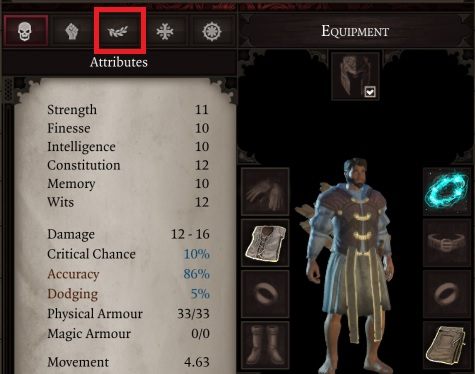 It is beyond any doubt that even within so narrow area of character development you cannot create a character that would be strong in any category.. This is why it is a good idea to build an unique type of character and, from the very beginning of the game, develop no more than two areas. Of course, all depends on how you picture your party, yet developing too many areas can lower effectiveness of the character in each.

Below, you can view all of the civilian abilities in the game.

With each level of this ability, prices on the items that you can buy will drop by a specific percent, in comparison with the base price of that item. In the same way, you will receive more gold for items that you sell.

Knowing how to barter is a key to gaining more and more gold. As long as you can buy items for the lowest price and sell them for a profit, you can be sure that your party will be equipped with necessary goods. If, on the party, there is a character with a high level of barter, make sure that it is the character that handles all of the transactions. This will be relatively easy, due to the fact that you can exchange items between party members.

Note - as you can see, after spending 10 points in Bartering, the character will be able to sell items for double the price, and buy them for free. This requires many points, but is totally possible.

Each successive level of this ability increases the character's chances of finding more loot while searching containers.

Contents of containers are generated at random, so you can never be sure what you get upon defeating an opponent, or after you lockpick a chest. Thanks to the high level of Lucky Charm, you stand a higher chance of finding valuable items and, as a result, of raising your statistics and your wealth. If, on the party, there is a character with an especially high level of this ability, make sure that they loot containers and other objects first.

Each invested point provides you with extra 4 points to persuasion of an NPC.

Skilful use of persuasion can help you achieve your goals and objectives without resorting to violence. What is important is that, at least, one character on the party has even a slight bonus here. Thanks to this, you will be able to handle conversations with that character, if all other means fail.

This ability allows you to examine your opponents for detailed information about them. Apart from that, thanks to this ability, your character can identify items.

Loremaster is an important ability especially from the perspective of a longer game. A character with a high level of the ability can identify items and learn about their hidden attributes, and what is even more, earn from doing that. The higher the level, the quicker the identification. Apart from that, it is a good idea to gather information about dangerous creatures to learn how to fight with them and what you can expect from them.

Each successive level allows you to carry heavier and heavier items over longer distances.

At the beginning of the game, you will not be using this ability too often, so do not spend too many points on it at the first levels. In general, this ability is useful especially when you learn to teleport party members. Without that, it may turn out that you will be unable to carry them over to the required distance. Remember that the ability to carry heavier objects can also be used in combat, because each item (or character) that you carry can be dropped on the opponent. In such case, both the opponent and the carried item will sustain damage and the heavier the object, the higher the damage.

Each successive level of this ability allows you to move faster while sneaking and increases your chances of remaining undetected. Sneaking is especially important for all the assassin-type of characters. It is a good idea to develop this ability to be able to move faster which, when combined with additional factors, will let you stay in shadows and perform successive actions.

Developing this skill makes it easier for you to pick pockets and locks. Although pickpocketing is one of the more beneficial abilities, trying to actually use it may have pitiful effects. It is a good idea to try, anyways, because you can reload the game save if something goes wrong. Out of the two abilities, the more important one is to pick locks, because it allows you to open chests and doors that are durable and would damage your weapon. Also, you should remember to save the game before attempting that, because every attempt costs you a lockpick.