This page of the Divinity Original Sin 2 guide contains a detailed description of Knight. You'll get acquainted with the basic information on this class, recommended playstyle, as well as its biggest advantages and?potential disadvantages.

Knight, thanks to his abilities and high endurance, he is very useful as a supporting class. Aside from that, you should keep in mind that an appropriately developed knight can deal major damage using a two-hander, and score serious critical hits after developing this ability.

Knight is the mainstay of the party, who has to eliminate the most dangerous enemies, and focus their attention on himself. He can shorten the distance in any given moment by knocking down the enemy, cripple him in order to immobilize him, or just eliminate the enemy with one strong hit. 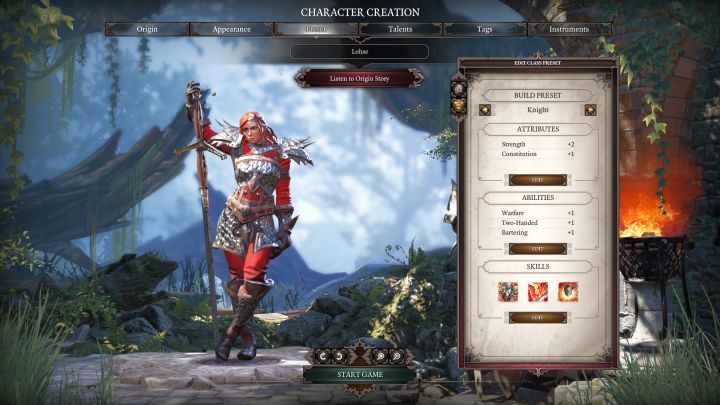 Knight in the class selection screen

The base parameters for this class can be found below.

Opportunist - this talent allows you to perform surprise attacks when an enemy pass by that character or when they want to move away from a Knight It doesn't activate when an enemy performs an attack or action that doesn't require them to move.

A Knight has access to one school, Warfare, which means that they can choose from 4 starting abilities. This class uses two-handed weapons and because of that there is no point in changing anything - the fourth ability from Warfare school, Bouncing Shield, requires a shield which is not used by this class. Because of that you should focus on using other default abilities - Battering Ram, Crippling Blow and Battle Stomp.