This page of the Divinity Original Sin 2 guide contains descriptions of all available combat abilities. We've explained how they work and listed how their effect and bonuses are increased when upgrading them.

Combat abilities tree will be the one you will use most frequently. These abilities will provide your character with additional modifiers that during the fight can turn the outcome in your favor. Specific combat sections are responsible for damage scaling, reduction of received damage and the bonus to abilities related to the developed school. 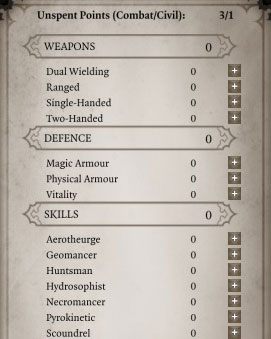 When creating a character, you can spend three points between selected combat abilities.

Before spending valuable points on ability, you should think about in which direction you want to develop your character. You should definitely avoid wasting points on all abilities. Instead, you should focus on selected directions. Remember not to create a too versatile character because it will quickly reduce the quality of her abilities.

Below you will find detailed information about all combat abilities.

In this section there are four abilities that determine how the character uses conventional weapons and what type of weapon he uses with best results.

Definitely the best option for a character that prefer to assassinate their opponents. In most cases an assassin uses a pair of knives or daggers which perfectly fit this ability. It is also useful for all characters that aren't using shields or two-handed weapons and that aren't based on spell casting.

A basic ability for each character that fights from distance. It is absolutely mandatory for the ranger and the wayfarer, but if you have your own character vision that is based on ranged weapon, then you can develop it as well.

Increased base damage and accuracy for characters using one-handed weapons.

There are many classes that could take advantage of this ability. Of course you must consider whether you should invest in it if your character uses magic, but it can be an interesting combination for a mage that was forced to participate in close combat. It is a mandatory ability for all melee fighters that use shield.

Similarly as in case of ranged weapon fighting, not many class use two-handed weapons, but it is worth attention since it increases the critical damage multiplier. It doesn't increase the chance to activate critical damage, but if the hit goes as a critical, then the enemy has great chance to die instantly.

In this section, you will find three diverse parameters that significantly improve the resilience of your characters. Leadership increases defensive performance of surrounding allies (but not the caster); Perseverance allows you to replenish a portion of physical or magical armor after the control-limiting effect ends; and Retribution allows you to deflect damage, harming every enemy that attacks the character.

Spreads around the caster an aura, which boosts defense abilities of all surrounding allies - that includes increased chance for dodge and resilience to all elements.

It's a very powerful ability that significantly improves the survivability of your characters. Let's just say that only 1 level of this skill provides 5% chance for dodge, which translates into 5 points invested in Finesse! The greatest problem of this skill is that its effects don't include the caster and that the radius is rather small - only 5 meters. This ability should be used on characters that are close to others; not on frontline tanks.

A few points of this skill along with elemental defense can render your characters very resilient to damage from all elements. Additional dodge chances are useful in melee combat, for units that can't sustain powerful attacks, such as mages and archers - you should thus use this ability on these units, which stay behind.

This ability makes sense with those characters that have a lot of physical/magical armor - this will allow for a good chunk of the armor to be instantly replenished. If you have a character with poor armor, then even 100 points and 2 levels of the ability will return only 10% armor, which is enough to be destroyed with just one attack of most enemies.

A powerful defensive skill that mostly is useful for melee units, especially the characters that are supposed to absorb damage - such as sword and shield warriors. Each point of this ability makes the enemy that attacks lose 10% of the damage he dealt. The ability works with every type of attack - melee, ranged or even spells. Investing some points in this skill (either by yourself or by items), will make your enemies regret attacking you.

Each point increases armor regeneration and poison damage dealt to enemies. This skill is useful for the mages, who use the spells from this particular school as well as warriors that want to increse the efficiency of Fortify.

Development of this ability mostly depends on how you intend to create your character. If the character will be frequently attacked and his role is to receive as much damage as possible, then you should invest a few points in enforcing him. You should notice the additional poison bonus which provides additional profits if the character uses abilities that can add a status to the opponent.

This ability increases the amount of damage dealt by the character that is standing on elevated ground in relation to the enemy. Interestingly, this is true not only for ranged attacks, but for all types of damage - grenades and spells included. It's a key skill for all ranged units, since it allows dealing considerably greater damage. However, it's no use for melee units and mages - the former don't have enough time to get a good vantage point; the latter should invest their points elsewhere.

Each point of this ability increases bonuses that a hero receives when casts a healing effects on them or allies as well as after performing actions that replenish magic armor. It also allows to deal more damage when using these abilities.

An important ability for all support characters. It can be useful to other characters as well. Bonuses are counted not only for school-related abilities but for other healing sources like potions as well. Each healing character should develop this ability, especially since it will strengthen effects caused by its abilities.

Each ability point increases regeneration of health points received whenever your attack is pointed directly at health points of the target (armor or spells aren't reducing it).

This ability is useful for every character, but it will work much better in case of characters with low initiative. Healing starts only after eliminating the armor of the enemy, so it is better if other party members take care of that first. Then the character with high necromancy power will be able to regenerate his health while gradually killing the opponent. You should keep in mind that the enemy can have magic armor that will reduce the effect or even completely cancel it. If the character uses abilities assigned to this category, then this ability should be definitely improved.

The situation here is a bit different: points invested here don't improve the abilities in this group. Instead, they provide additional attribute points - each point you invest in Polymorph is converted into 1 attribute point. We recommend spending just one point here if you have to (it can be useful for melee warriors and archers); the rest should be spent elsewhere.

Each ability level increases fire damage dealt by the character.

Each character that uses the Fire elemental should definitely develop this ability to high level. A single point might not make a big difference, but if you take in mind the percentage bonus go overall fire damage on higher levels, then the difference is great.

Each level of the ability increases the critical damage multiplier and the movement speed of the character.

An important ability for characters who use two-handed weapon and for assassins. Increased movement speed will allow reaching the targets faster and the ability itself works the best for a character that has high chance for dealing critical hits. A combination of these two parameters allows dealing great damage even if the weapon doesn't offer high basic damage.

Each point spent on Summoning increases Vitality (health points), damage as well as physical and magic armor of a creature that was summoned by character. This ability is crucial to characters that focus on using abilities from that school - each point greatly increases familiars' effectiveness, allows them to deal more damage and increases a chance for hitting an enemy before they are eliminated by an enemy.