The Divinity Original Sin 2 guide provides you with a number of pieces of information on tags that you can pick for the character that you are creating. Predominantly, this chapter describes abilities that result from and how to use them.

Bt default, each character that you create uses two tags. One of them is ascribed to the gender of the character, whereas the other is a result of the race that you have picked. In the case of the predefined characters, the situation is a bit different, because their tags have also been predefined. 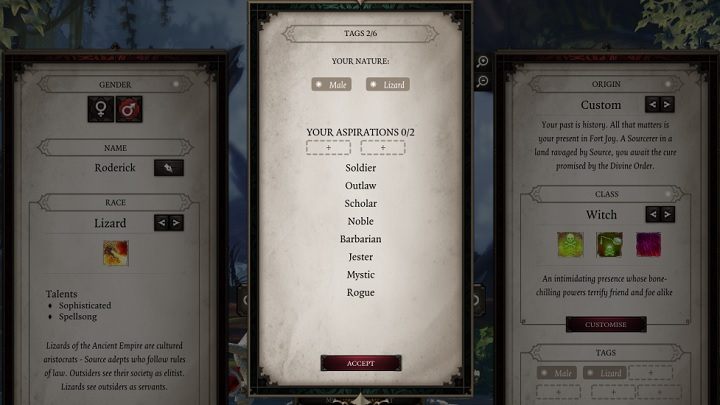 Just to remind you, tags do not reflect either the class or the attributes of a character, nor their role in the party. Tags define predisposition thanks to which the character can manifest his personality during interactions with other characters, by using the dialogue options that come with the tags. You should be careful with that, though, because oftentimes, giving away your views or traits may have a negative effect on the completion of the quest.

If you do not pick any tags during the character creation process, you start the game without them, which is not a desirable thing, from the viewpoint of the storyline. If you cannot decide on any specific tags, it is better to pick them at random, thanks to which you can still use extra dialogue options. Even if they are purely random, it is still better than no such dialogue options at all.

Each one of the tags has been discussed in the section devoted to it, below.

Soldier proves his worth especially while interacting with guards or other NPCs with similar disposition. It is thanks to him that guards in the city trust you and you can obtain from them information that you would be unable to obtain in any other way.

Outlaw has a very low sense of belonging and he relates to the creatures of the world to a very small extent. However, thanks to this, he can obtain interesting information from people who, just like him, feel that they belong elsewhere.

Noble will much easier communicate with humans, he is very skilled at obtaining important information from people in high places. However, it is best not to abuse this tag in conversation with people who do not understand the tone of these dialogue options, because this may offend them.

Barbarian is especially useful when talking to dwarves. He is rather churlish, so you shouldn't send him to talk with humans, especially those belonging to the Magistrate.

Jester has a whole slew of scathing and ironic remarks. You should use his lines very carefully, as it may quickly turn out that got offended, and a fight may erupt from a seemingly unimportant conversation.

Mystic will constantly search for connection between daily events and the effects of super natural forces. He is useful when talking to various clerics or fanatics concentrated around altars.

In case of a Rouge, most of his dialogue options are especially useful when talking to prisoners who are prisoners, similarly to him. Using his talents, we can learn about secret passages and hidden treasures.