This quest can be completed alongside the progress in the main quest line. 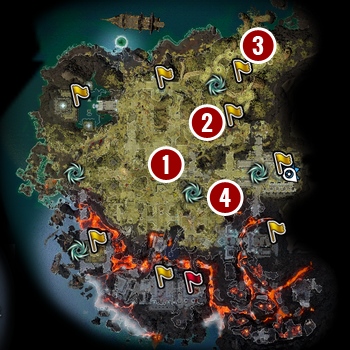 1. Temple Of Rhalic - Location of the battle

4. Temple Of Rhalic - Entrance to The Cave

The quest will activate once you encounter a group of magisters fighting the Black Ring [1]. Just choose a side in the battle.

Next, go to Forktongue [2] and talk to him. If you've sided with the magisters in the first fight, you'll have to convince him that you're on his side. Otherwise, you'll be forced to fight him, and the Black Circle will become hostile towards you. Either way, you'll acquire the Black Mirror, which will enable you to contact Sallow Man. He, in turn, will want Alexander's head [3].

Then, head for the Temple Of Tir-Cendelius and talk to Alexander. This is the moment when you'll have to decide whether to help him, or kill him.

To complete the quest, you'll also have to confront Sallow Man. To do so, head for The Cave [4], located near the Temple Of Rhalic. The reason for the meeting is irrelevant.