In this chapter you can find information about all key and challenging fights that take place on the last location in the game, Arx. 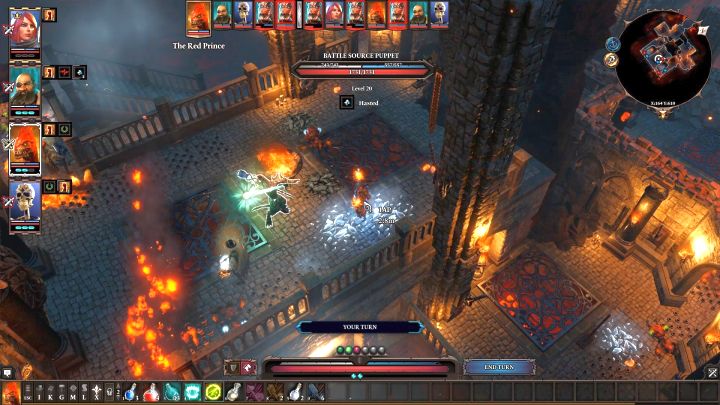 Use Source Vampirism to kill the enemies permanently.

During Hammerfall quest you reach a room full levers and traps. Shortly after that you will have to fight with a lot of enemies called Battle Source Puppets. These enemies aren't that challenging because in most of the cases they will run around without a goal. However, defeating them requires a certain trick - you must use Source Vampirism.

Simply defeating them does nothing - they revive shortly after that and start to annoy the party again. However, use the ability mentioned above (which can be acquired during your adventures on Reaper's Coast) to make them explode one after another. You don't have to reduce their physical and magic armor - Source Vampirism kills them even if they have full health. 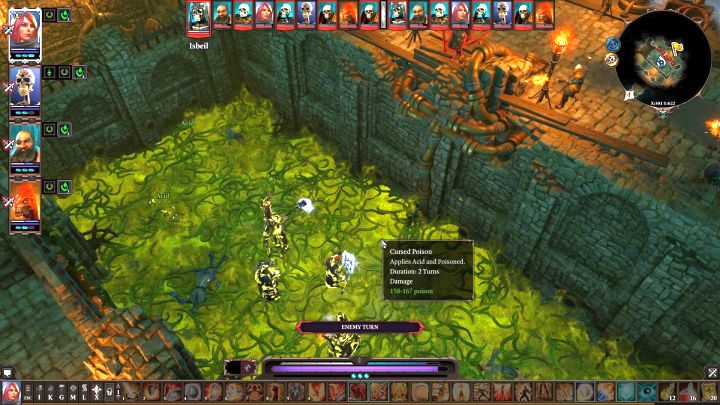 The party starts the fight in a pit filled with poison - you should get out of it.

The fight with Isbeil and her allies takes place during The Missing Prisoners quest. Your party starts in a bad spot - everyone is inside of a pit filled with poison. The first thing that you should do is to get out of the trap - you can do that by using Teleportation, Spread Your Wings, Cloak & Dagger and other similar abilities and spells. 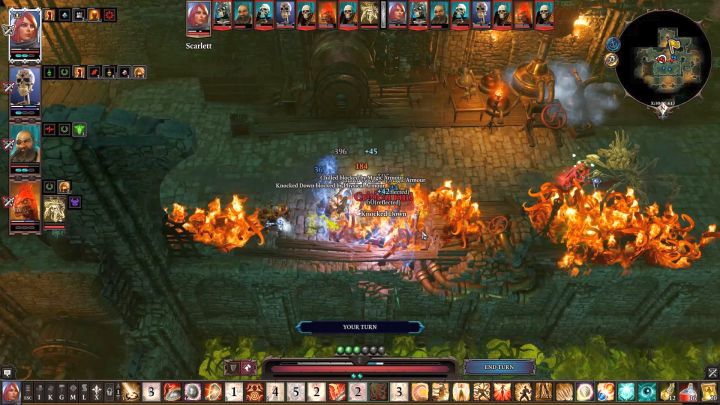 Isbeil doesn't have a lot of physical armor which means that she is easy to knock down.

After that the fight isn't really difficult. You should remember that all enemies are Undead - this means that they can be easily hurt by healing spells and that they are invulnerable to poison (it heals them). The enemies are also resistant to Bleeding effect. You should deal with Isbeil first - she has a lot of dangerous spells. The best way to do that is to use abilities that inflict Knocked Down status - Isbeil has a small amount of physical armor. You can easily break through it and keep her on the ground. 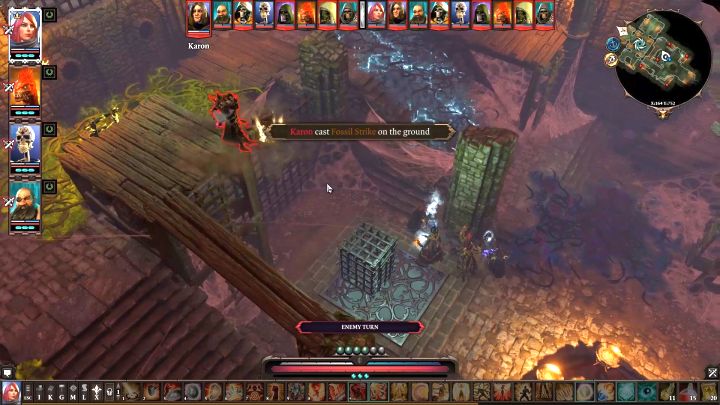 The enemy starts the fight by bombarding the party with a series of spells.

The fight with Karon takes place in a secret room under Vault of Linder Kemm. There, you can find a child trapped inside of a cage and a pentagram with five hearths. Lighting them all at the same time (e.g. by using Fireball spell) starts a fight with the enemy and his allies. 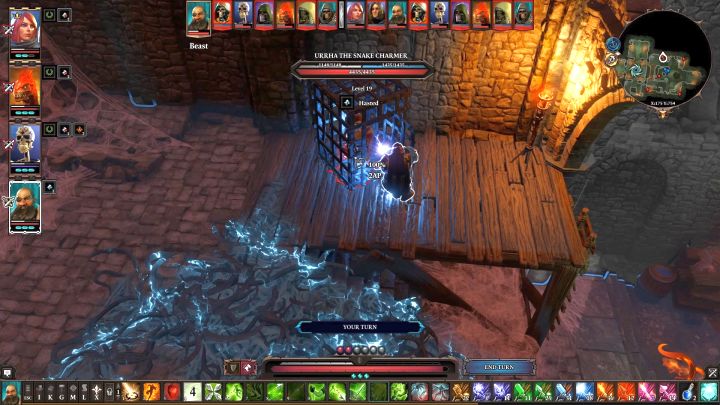 Urrha the Snake Charmer is the most dangerous enemy in this fight.

You should equip your party with a lot of magic armor because enemies, especially Karon, have access to powerful spells. Their levels are also high (19). The enemy always starts the fight by casting a few spells. The one that should be eliminated first is the archer inside of a cage in the north part of the room (Urrha the Snake Charmer) - he has arrows that allow him to control your characters. However, he has a small amount of both physical and magic armor. The rest of the enemies, including Karon, aren't challenging - you can summon creatures to attract attention of enemies that are on sides of the room. 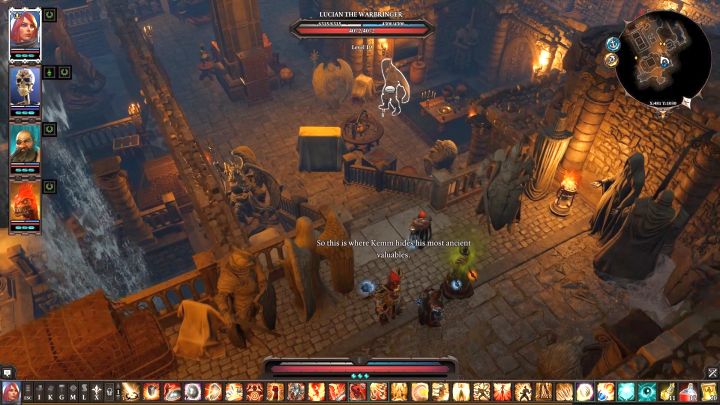 You should wait for your enemies to disperse.

Upon entering the Vault of Linder Kemm you come across three moving statues that will attack you immediately if you get closer to them. Two statues are right next to each other but you should wait for the second one, Lucian the Harbinger, to move farther away before you start a fight - the enemy is very slow which means that it can lose up to three turns before it will be able to do anything to you. 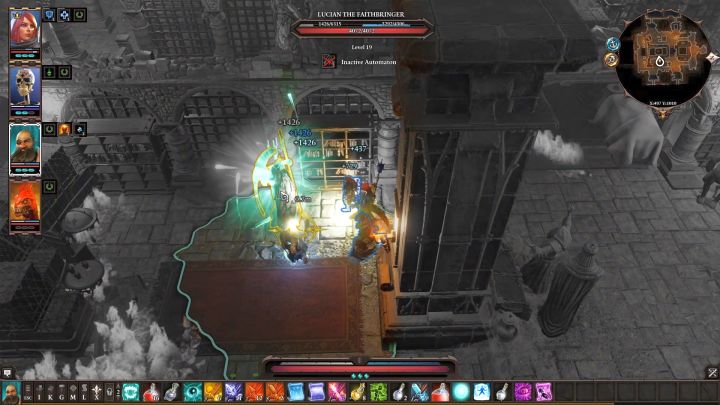 The enemies should be finished off by using Source Vampirism ability.

This is another unique fight where defeating enemies is not enough - they become immobilized and, after a few turns, they go back with full health bar and replenished armors. The solution is simple - you must get their health points down to zero so they can start regenerating. Then, you must use Source Vampirism ability to finish them off. Repeat these three times to eliminate all enemies. 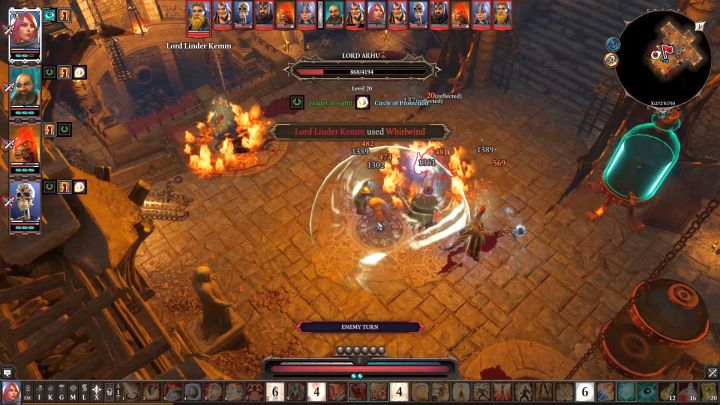 You must make sure that Lord Arhu survives the fight.

The fight with Lord Linder Kemm takes place during your rescue of Lord Arhu - remove all three ghosts by using Source Vampirism and you will start the fight. The aforementioned enemy will soon join it. 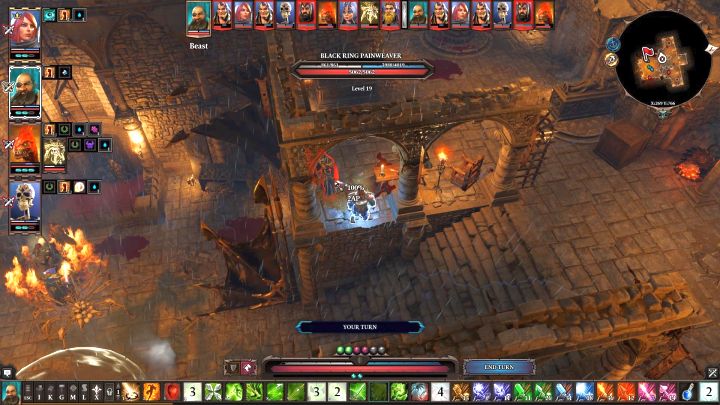 Quick elimination of the enemies that are on a hill is your key to success.

The fight with Kemm isn't that difficult, however, you must remember about two things. First - you must protect Arhu. The character is inactive and can receive damage so you should teleport him outside of the battlefield or you can keep increasing his armor and regenerate health. Second - you must focus your attention on two enemies that stand on a hill. They can use powerful abilities and area spells. They can even take over your characters. Both enemies have a small amount of physical armor which means that assassins (Rogue, Shadowblade) or archers (Ranger, Wayfarer) are great against them because they can deal a lot of physical damage. The rest of the fight should go smoothly. 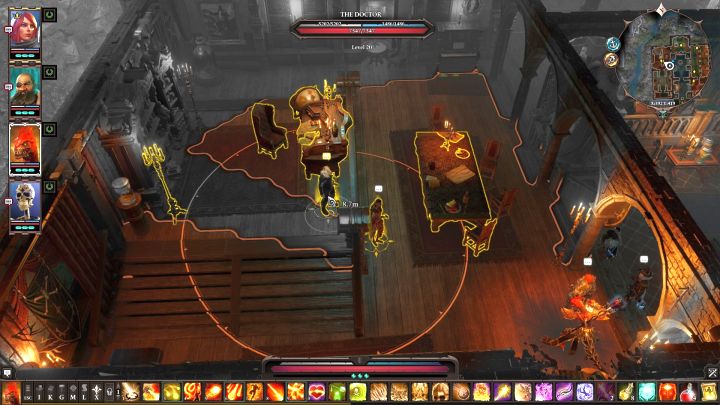 You should initiate the fight by attacking the enemy first.

The fight with The Doctor takes place during a quest with the same name. The titular enemy fights alongside a few companions that are scattered around the entire room. The Doctor is the biggest threat here. He can change form during his first turn which gives him a lot of strength. Because of that you should eliminate him before he can use this ability. 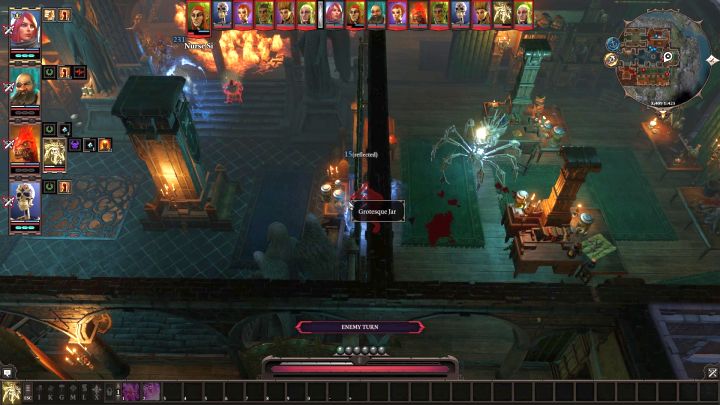 The Doctor is dead. Now, you should focus on the rest of the enemies.

You can do that by using magic because the enemy has a small amount of magic armor - you can Freeze, Stun or Petrify him so he won't be able to transform. The fight should be initiate by you. Attack the enemy instead of talking with him first - the fight can't be avoided and by starting first you can deplete all of his armor before he will be able to do anything. After his death you should deal with the rest of the enemies. 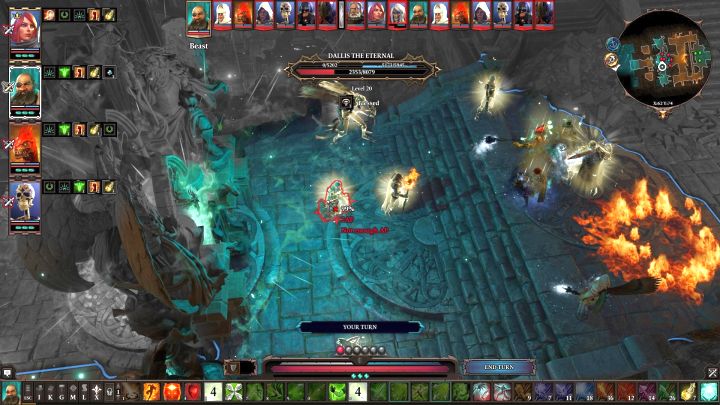 The first stage of the fight ends when Dallis the Hammer's health points are reduced drastically.

The final fight in Divinity: Original Sin 2 is rather easy, provided that you have prepared yourself. You should equip your party with a lot of abilities that use Source Points - you have an unlimited amount of them throughout the entire battle. The fight is divided into two stages. During the first one you must face a small group of enemies including Dallis the Hammer and Lucian the Divine. You can end this fight quickly by reducing a lot of Dallis' health points - you can use Arrow Storm, Meteor Shower or Hail Storm abilities. When her health is low you initiate a conversation. After that you must participate in the final stage of the battle. 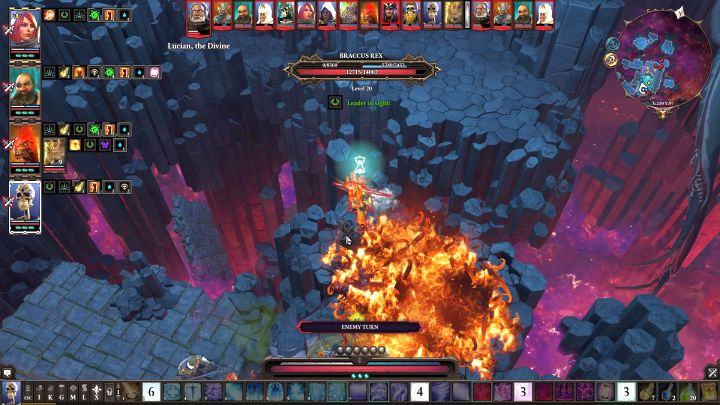 Let the enemies kill each other.

Here, the fight is between three groups - yours, the one that you fought with a few minutes ago (commanded by Dallis the Hammer and Lucian the Divine) and a new one, leaded by Braccus Rex and his Kraken. You have to follow a few advices that make this fight one of the easiest in the entire game. These tips are:

Following the advices described above allows you to defeat the enemies with ease.