In this chapter, you can find solutions for all puzzles that you can come across during your exploration of a huge location called Reaper's Coast.

Mordus' house is accessed during "Shadow Over Driftwood" quest. In the basement, below his house, you can find a room with plates and door that is locked with a magic lock. You must solve a puzzle and you can check its solution by using Spirit Vision ability (you can get it during "Powerful Awakening" quest which is described in this guide). 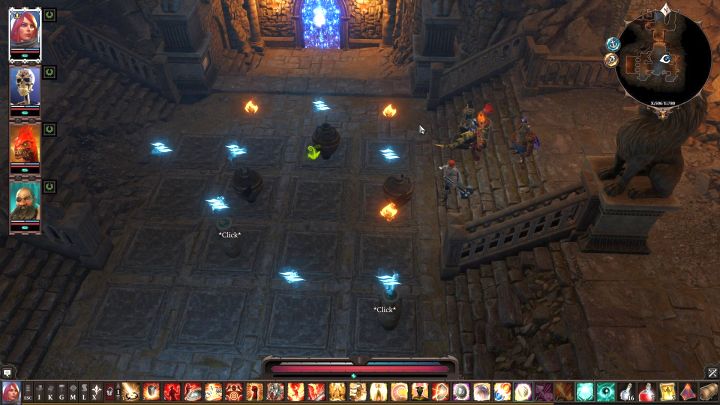 The solution for the puzzle.

If you don't have this ability or you don't know how to solve this puzzle, you can check the picture above - it shows you the solution. You simply have to place any of the items on the right plates (you can place characters or urns that are nearby). After that you unlock the door and you will be able to enter inside. 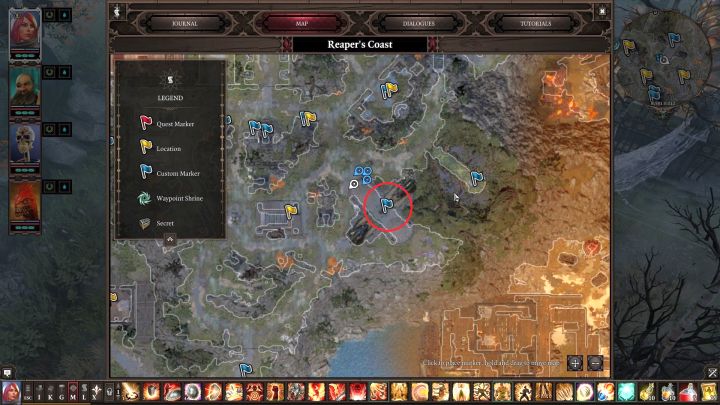 The location of the chest on the map.

Thrice-Bound Chest can be found on a cemetery, south from Stonegarden Graveyard checkpoint. First, you must use Teleportation spell (or the item that you use during "The Teleporter" quest) to take the chest out of fire. After that you can have a conversation with the chest by using a character from Lizard race (such as The Red Prince) or you can use Mask of the Shapeshifter and change any of your characters into a Lizard. 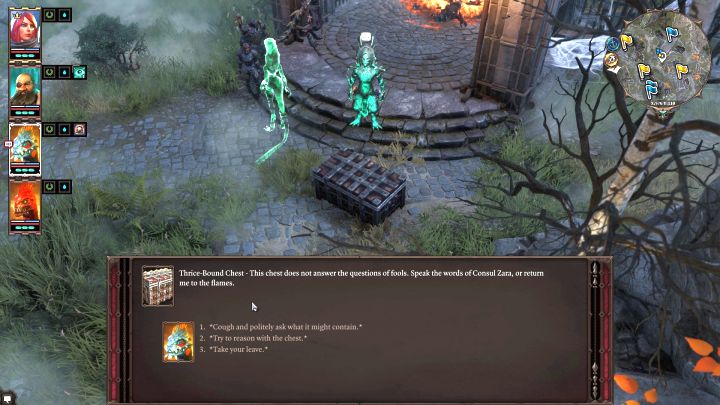 Fane is perfect for this quest because he can easily turn into a Lizard.

There are two ways in which you can get the password to the chest: 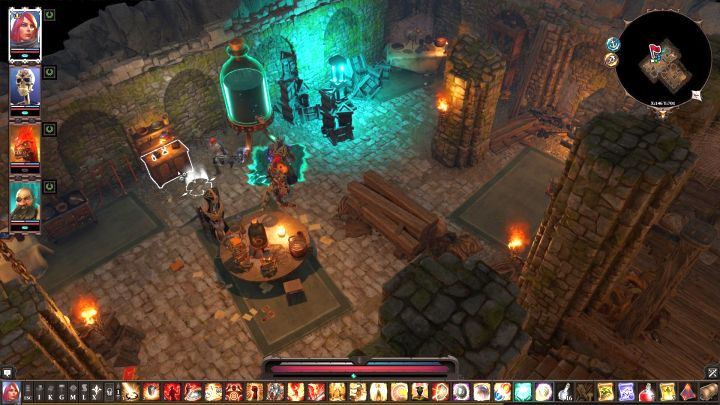 The alchemic ingredients are located in this closet.

During "A Powerful Awakening" quest you reach Meistr Siva's basement where you must perform a special ritual that can allow you to go back to Hall of Echoes. In order to perform it you must find the right ingredients - they can be found in the closet that stands right next to a Source Fountain (a container that can be used for restoring Source Points). Now, you must complete the following steps: 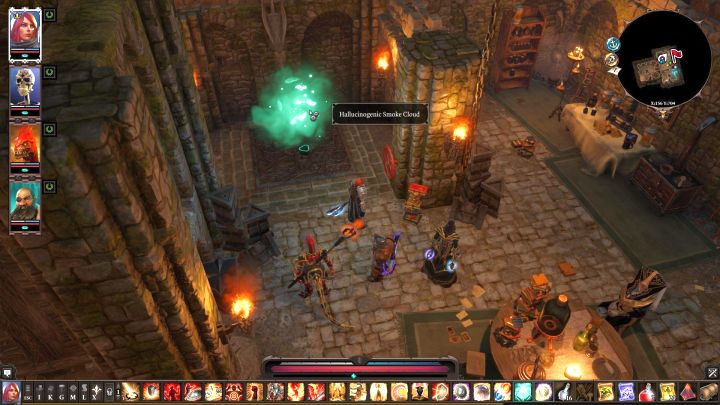 This is how the Hallucinogenic Smoke Cloud looks like.

This creates a green hallucinogenic smoke cloud that can help you access Hall of Echoes where you can get Spirit Vision ability.

Warning - you must perform this ritual again if you want to get another ability from Sourcery school. But first, you need to find another Blackroot - this plant is in Cloisterwood (right next to a teleportation shrine). Visiting Hall of Echoes again allows you to get Source Vampirism ability.

Light up the torches near The Burning Prophet's statue 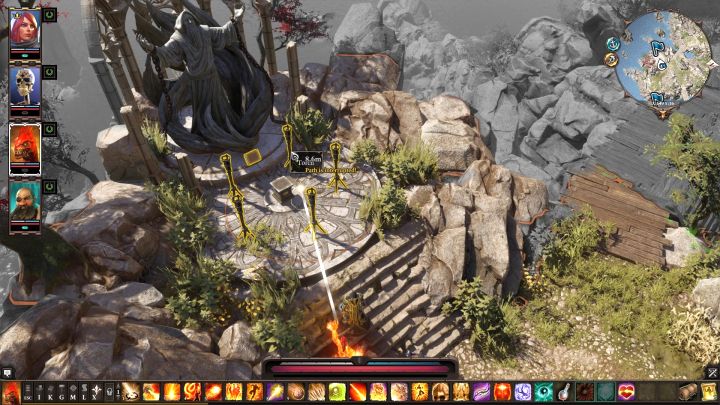 You can light up the torches by using, e.g. a Fireball spell.

When you reach the cliffs located near the entrance to The Wreckers Cave, you will come across The Burning Prophet statue (connected to a quest with the same name). In order to solve this puzzle, you must light up all 5 torches at the same time. You can use an area spell (such as Fireball, Ignition or Supernova) or you can spill Oil under the torches (by using Oil Flash item, Oil barrels or Fossil Strike ability) and then set it on fire. After that you must speak with the statue and select your reward. 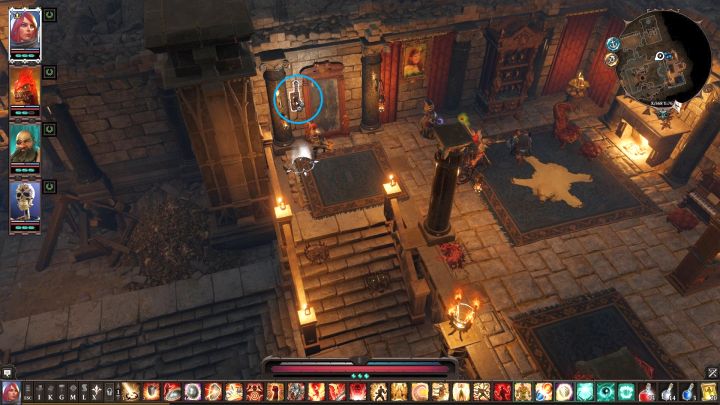 On one of the walls, next to a mirror, you can find a hidden lever.

Under Ryker's house (the yellow flag with Ryker's Rest written on the map - you reach that place during "A Generous Offer" quest) you can find his Private Chambers. There you can find door that can't be opened in a normal way. In order to do that you need to get closer to a mirror that stands near the stairs. Approach the object with a character that has a lot of Wits points (about 25 - you can increase your amount by using Peace of Mind spell). This allows you to locate a hidden lever (you can see it in the picture above). 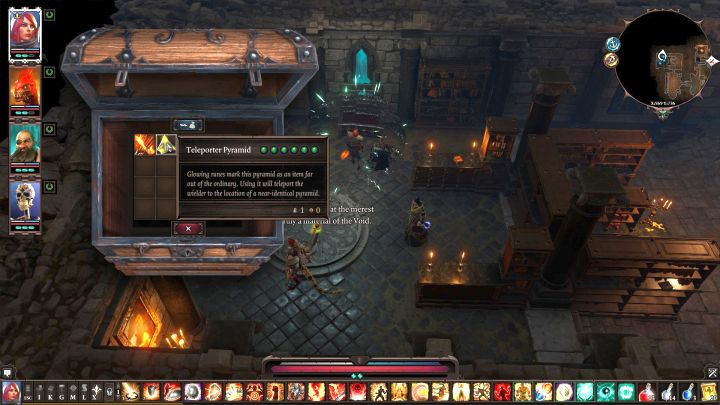 A chest, hidden in the newly opened room, contains the third Teleporter Pyramid.

Pull the lever down and go back to the place with the locked door - you can now enter inside. The most important thing that you can find in the room is the third Teleporter Pyramid that can be found in the chest in the corner. 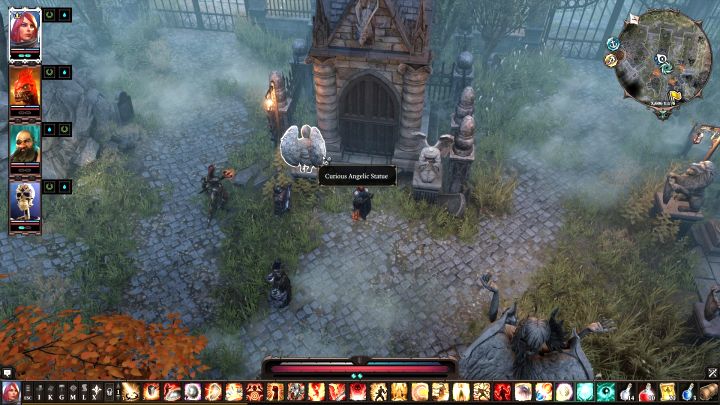 The location of two statues.

North from the Stonegarden Graveyard checkpoint you can come across a tomb with two statues in front of it - Curious Angelic Statue and Broken Angelic Statue which is missing a head. First, you must fix the second statue - go south-west from the statues and you will be able to find Head of Angelic Statue. Pick it up and go back to the statues. 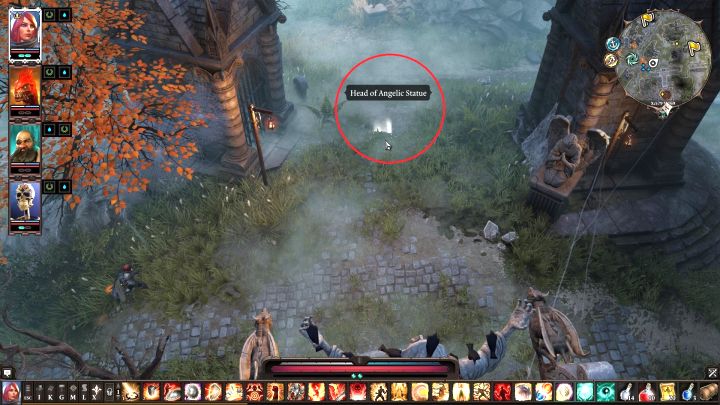 The place where you can find the head.

Interact with the statue and select "Attempt to repair the statue" option. Open your crafting menu, place the head and start repairing the statute. After that you must interact with the second angel and turn its back towards the tomb. These two actions open the entrance and inside of it you can find a sarcophagus with a treasure. 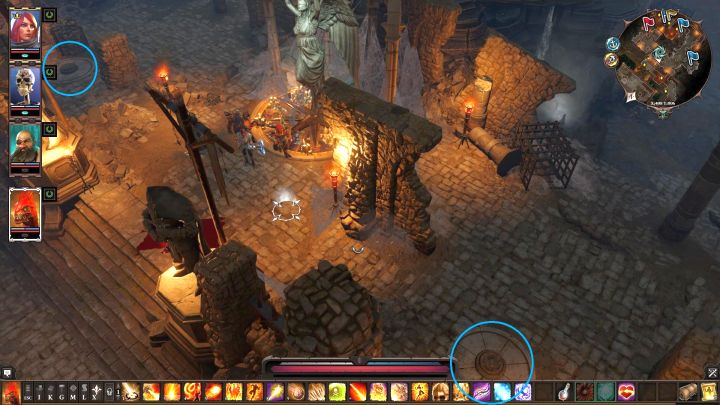 Both plates are marked blue and in the upper part of the picture you can see the teleportation shrine.

In Driftwood arena, east from the teleportation shrine, you can find a room separated from all directions. As you can easily guess, there is a way of getting there. There are plates east and west from the previously mentioned shrine (marked in the picture above) that must be pressed. Place characters on both of them (or any heavy objects) and then wait for the wall to move. 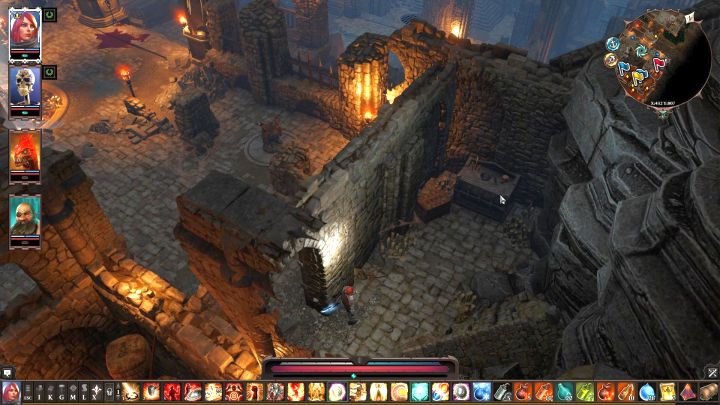 Inside, you can find a chest and a skeleton that can be looted.

Now, you simply have to enter inside and search a chest and a skeleton that lies next to a wall. 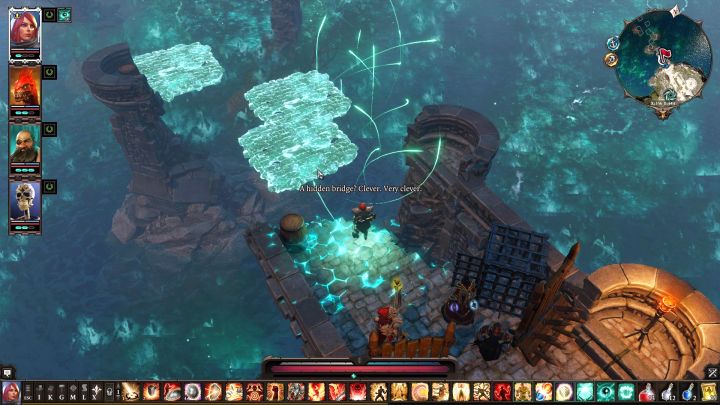 Spirit Vision can reveal hidden platforms above the destroyed bridge.

During your quests on Reaper's Coast you can notice that some of them are located in the north part of the location called Bloodmoon Island. Reaching it can be problematic - it is surrounded by Deathfog that immediately kills anyone who enters it. If you don't want to go through it with an Undead character (they are immune to that effect) you can stand on the edge of the destroyed bridge and use Spirit Vision. This reveals hidden platforms that can be used to get to the other side - You can use abilities like Phoenix Dive, Spread Your Wings or Teleport.

A Trial For All Seasons 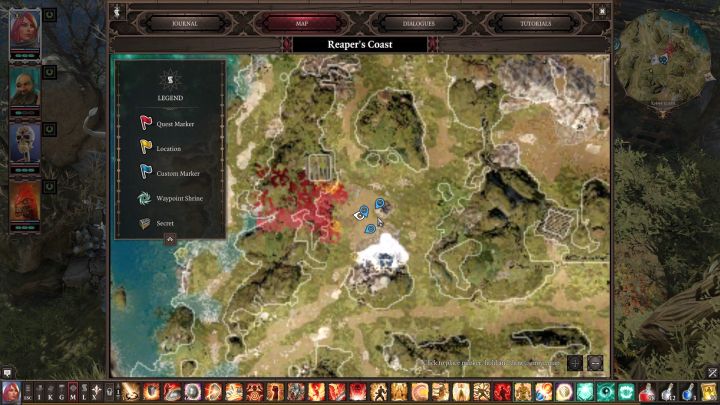 The place where you can find totems.

This puzzle is connected to a quest with the same name. In the place presented in the picture above you can come across 4 totems, each representing one season. In the middle you can find a campfire with which you can talk and learn about a trial that takes place here. If you want to partake in it, you must activate all 4 totems. The campfire can give you information on how to do that. In order to activate them you must perform the following actions:

This initiates a conversation and after that you must fight with four enemies that represent a given season. After that you can collect your reward from a chest that will appear in the campfire. 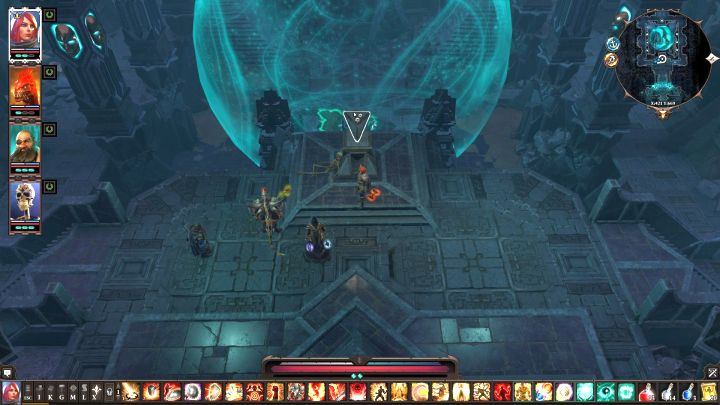 First, you must speak with the "object" and then you can read the book that is inside of a skeleton.

During "A Generous Offer" quest you reach an ancient temple at the end of which you can find a force field that blocks you from making progress in the quest. You must solve a puzzle if you want to turn it off. Start with a conversation with the object that is in front of the force field. Then, you must search the skeleton that lies next to the object - inside, you can find a book that will help you in solving this puzzle. 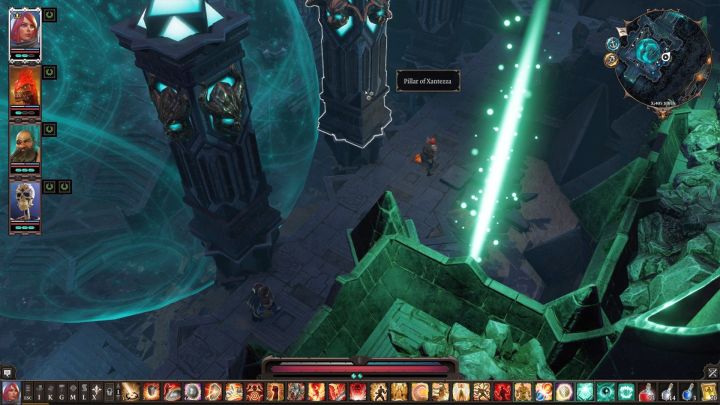 Then, you have to activate the statues in a certain order.

Now, you have to activate the statues in the right order: Amadia, Tir-Cendelius, Duna, Zorl Stissa, Xantessa, Vrogir and Rhalic. After that a new character, called Eternal, will appear in the room. You must fight with it. 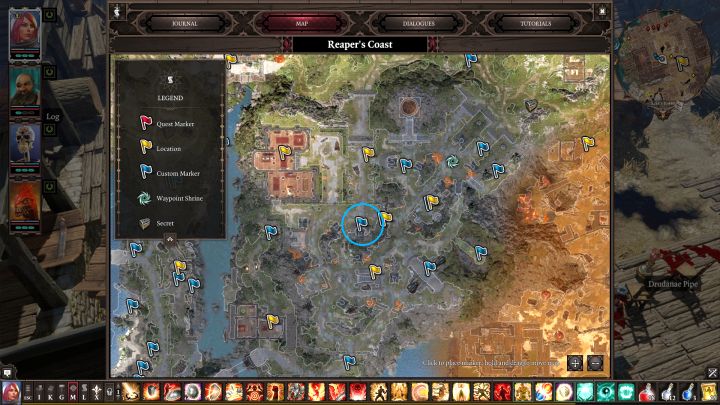 Location of the Gated Crypt.

In the Stonegarden Graveyard you will find a crypt protected by a hostile dog, Andras. Once you defeat him, you can use the Gated Crypt Lever and enter the crypt. Inside you will find a few petrified characters. You should be interested only in the one named Qanna. Cast bless on her. A conversation and then a battle will start. Defeat the woman and collect the Shadowed Tomb Key and a Ripped Page from her corpse. Keep the key and read the note - both items will be soon helpful in entering the Shadowed Tomb.

Important - If you want to get the treasure hidden in the sarcophagus near Qanna, you must cast Fortify on your character before interacting with the object. Otherwise your character will be petrified.

Shadowed Tomb / Johanna's Tomb is a tomb that can be found in the Stonegarden Graveyard. You will get inside it during the quest "All in the Family". A key or thievery skill is required for entering the crypt - the key can be found inside the Gated Crypt. 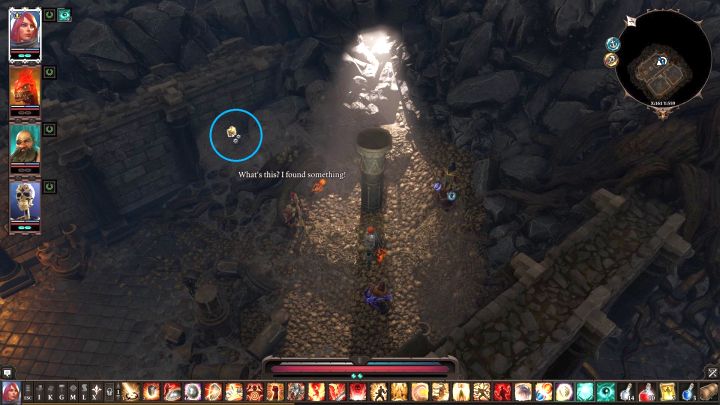 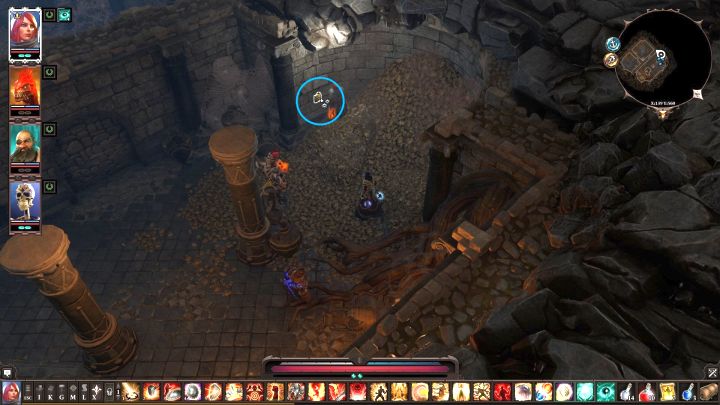 Once you enter inside, your first objective is to find two buttons - they're on the right and on the left from the door (both locations are shown on the above pictures). 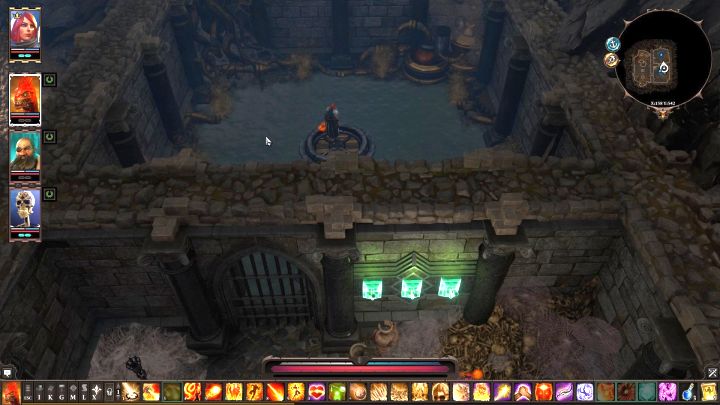 Position a resistant character on the large button and then properly operate the three small buttons.

In the next room you will find a sarcophagus. Ignore it for now. Separate one character (preferably one with strong magic armor) from the rest of the team, open the door that leads south and position that character on the large button in the middle of the next room. Now select another character and cast Spirit Vision to reveal 3 new buttons on walls. First press the middle one and repeat it until water appears in the second room. Then do the same with the left button - press it until lightning appears. Finish the process with the button on the right side - this will create a Blessed Fire. Now you can gather the party and use the secret passage that will appear near the mentioned sarcophagus. 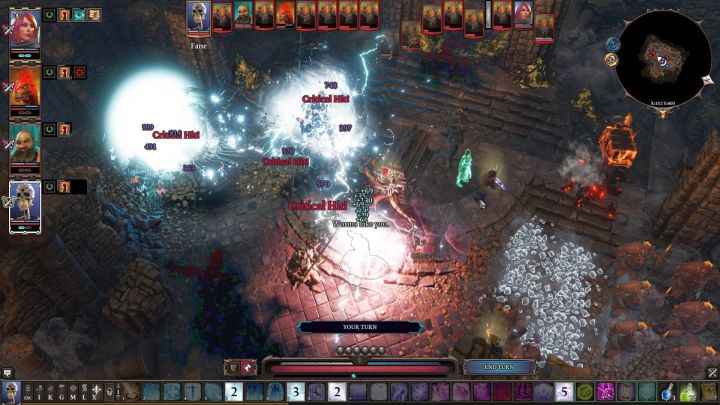 Aerotheurge spells are extremely effective on the earthen soldiers.

On the lower floor you can speak to the ghost of woman. However, your objective is to pull the sword from the sarcophagus. Watch out - once you do it, a battle with earthen figures will start once you try leaving the room.