In this chapter, you can find solutions for all puzzles that you can come across during your exploration of Fort Joy island. 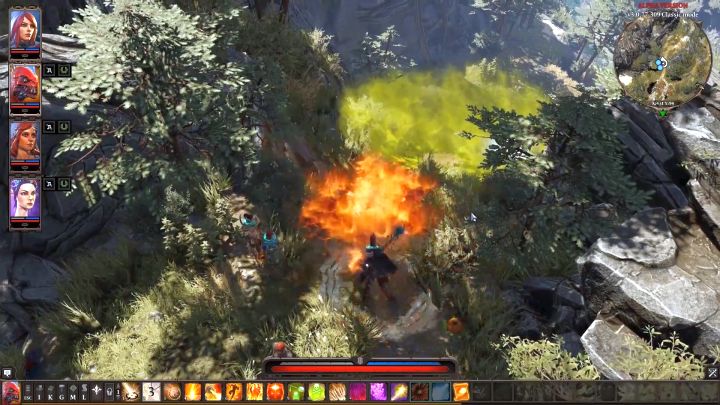 Traps are deactivated by the same element from which they were made.

Puzzles that involve objects called Noxious Bulb will appear throughout the entire game - you can find them on Fort Joy, Reaper's Coast and on the last island, Nameless Isle. The objects come in various colors and they emit an element around them - blue "mushrooms" created an electric cloud, green can poison you and red create flames. Also, if you step on them or you use a wrong element they will cause an explosion that deals additional damage. You can get rid of them by using the right element:

When you do that an Noxious Bulb stops working and will become completely harmless. 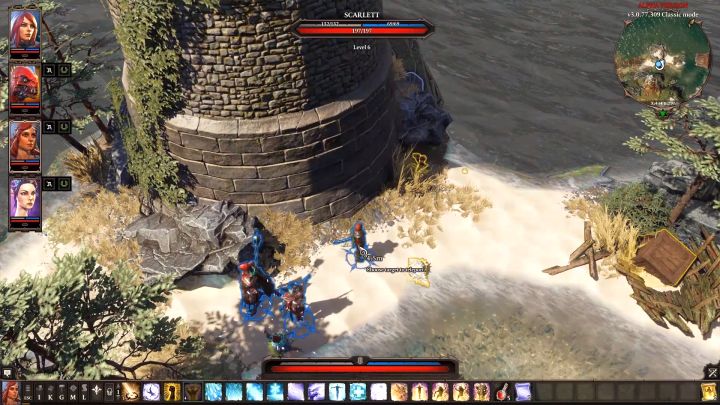 The tower can be accessed by using Teleportation spell.

When you escape from the fort, you will be able to explore the second part of the island. In its north part, on the beach, you can find a destroyed tower inside of which there is an electrostatic cloud. The tower also contains treasures (including one of the parts of Braccus Rex's set). The tower can be accessed in two ways:

After that you can collect treasures and leave the tower - you can teleport back or interact with a liana and go down. 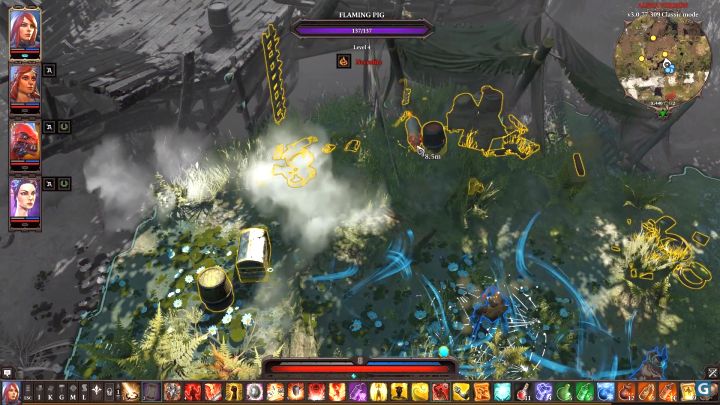 The pigs can be extinguished with Bless spell.

During your exploration of the island you can come across an area that is full of various traps and barrels with oil. There, you can also find pigs (5 in total) that have Necrofire status effect. The fire can be extinguished with Bless spell (you get it during The Vault of Braccus Rex quest or after making enough progress in the story line). The whole process must be repeated for each pig. If you happen to run out of Source Points then you can search for spots near the pigs that can regenerate your points.

After helping all of the pigs Scapor, an Undead Lizard, will appear. You must fight him. Defeat him and collect one of the items from Braccus Rex's set - the rest of the items and ways of acquiring them are described in "How to get Braccus Rex's armor?" chapter.

The Gargoyle's Maze is a rather big location that can be found in the south-east part of Fort Joy. In order to reach it you must first go through a garden that is full of traps. If you completed "The Vault of Braccus Rex" quest, you will have an easier task. You simply have to approach the gate and, after a short conversation (during which you say that you are Braccus Rex) the party will be moved right next to the Maze's entrance. This process is presented in the video above.

Two notes about this place:

The Historian is located right next to the entrance to The Gargoyle's Maze (a quest with the same name is connected to that place - its description can be found in this guide). The character is kneeling on an altar and has Necrofire and Curse status effects. However, before you start saving him, you should teleport The Historian (by using the ability from Aerotheurge school or the item that you can get during "The Teleporter" quest) from the altar to the stairs on which your party stands. You should do that because The Historian is guarded by a group of Undead - teleporting him allows you to avoid fighting near that character.

After that you must create a blood pool beneath him (or move him on a pool) - you can do that by using Raining Blood spell, Flesh Sacrifice ability (unique to Elves) or simply attack any of your characters. Then, you must cast Bless on him to remove Curse. Finally, you can speak with the man and after that he disappears. 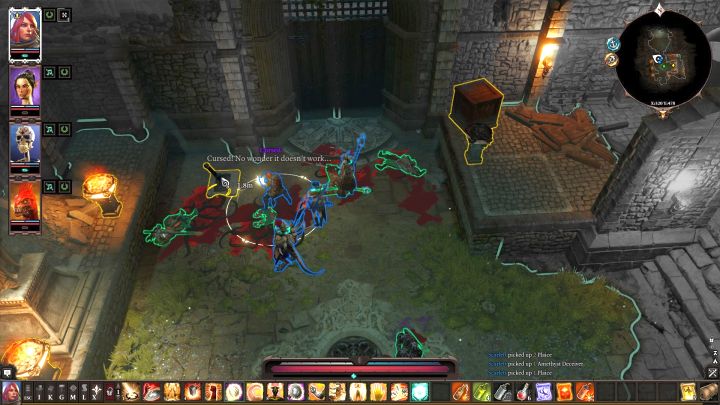 Use Bless spell to remove Curse from the lever.

This Cursed Lever can be found in Decrepit Ruins - a small location that can be accessed near the place where you save Gareth ("Most Dangerous When Cornered" quest). Enter the location. On the left, you can find the Cursed Lever - interacting with inflicts Curse on a character that touched the lever. Curse can be removed with Bless spell. After that you can use it.

The next location contains Shrine of Braccus Rex - you can interact with it (you need one Source Point) and take out one of the items from Braccus Rex's set. The rest of the items and ways of acquiring them are described in "How to get Braccus Rex's armor?" chapter.