Below you can find an overview of smaller quests that can be completed in a nominal amount of time. 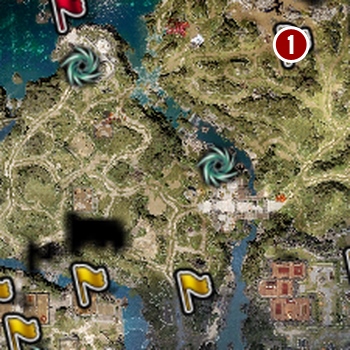 If you saved Amyro in Fort Joy, he surely asked you to spread the story of Saheila among the remaining elves. You will be able to do just that in the Reaper's Coast, where an elven camp is located. 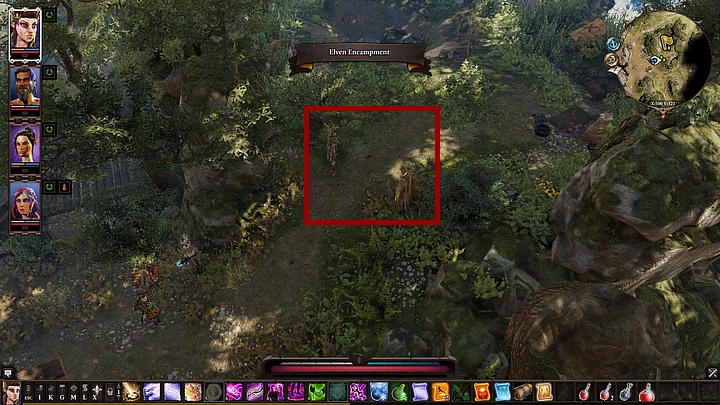 When you arrive at the camp, you will find an elf during a mysterious ritual. If you try to approach, you will initiate a conversation with a guard, which may end up in two ways:

If your persuasion is high enough, you will be allowed into the ritual ground. This will let you unlock the quests Burial Rites and The Elven Seer.

If you didn't manage to win the elves over, they will not want to listen to you. On top of that, you'll be asked to leave the ground.

If you were allowed into the sacred ground, one member of your party will have to participate in the ritual. You should pick up an elf if you can (ideally it will be Sebille). Your task is to choose those dialogue options that will impress the elves the most. These are always the top dialogue choices.

Award: Experience points awarded depending on how contented the elves are + 4 guaranteed items and 1 of 4 to chose from depending on character class (only if the ritual goes perfectly). 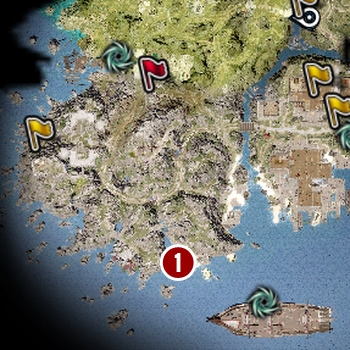 You will spot a mysterious lamp on one of the beaches. 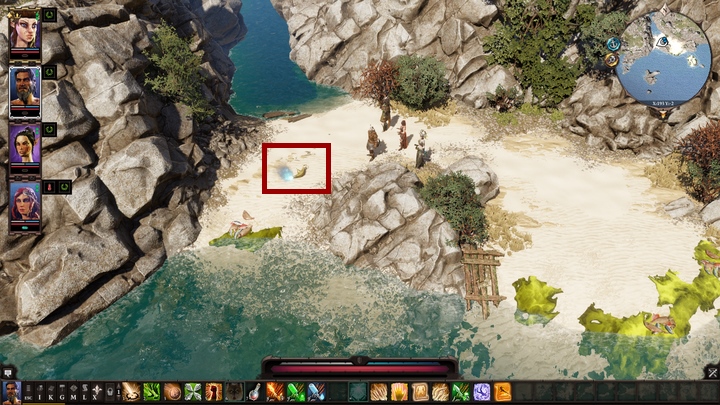 If you interact with it, a Djinn will appear. It will turn out that the lamp was abandoned because the Djinn is aggressive. There are two ways to solve it.

If you have the right persuasion level, you can convince the Djinn, to fulfill your wish instead of pestering you. You will be able to say a wish.

Award: 9750 experience points + an item that you wished for

If you didn't convince the Djinn to cooperate, it will attack your team. The fight isn't hard, and the quest is completed with the perishing of the Djinn.

This quest starts when you find a statue with six torches in front of it, the statue is located on cliffs near the entrance to The Wreckers Cave. Your goal is to lit all torches. It is important to lit them all at the same time. You need to use an area of effect ability. It can be Fireball or Fossil Strike that you can later set on fire. 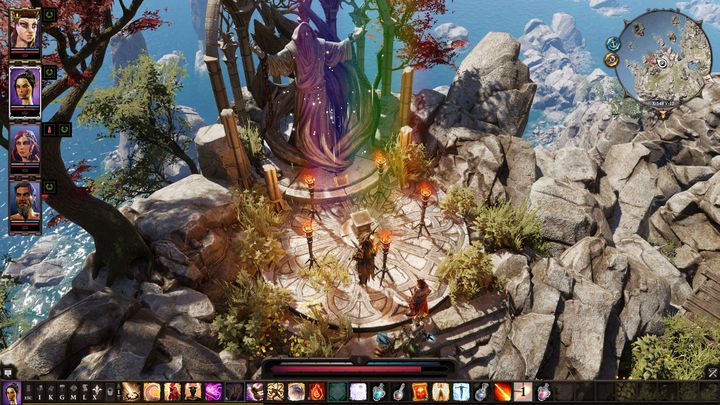 When you lit the torches, you will be able to learn a story of the prophet that is trapped there.

A Danger To Herself And Others 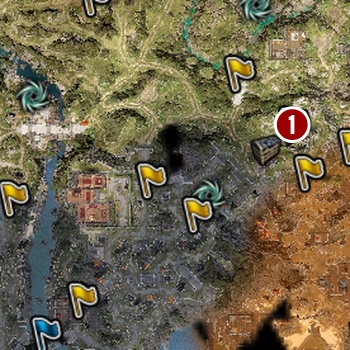 You can meet a man near the entrance to Stonegarden. He is the local healer and he has a certain problem.

If your Persuasion is high enough, you will be able to convince him that you can help the man. He takes you to a basement where you can find a woman with a collar. When you try to speak with her, she will attack you. She summons manifestations of her emotions. If she dies first, the manifestations will become weaker.

Grebb can be found in Driftwood's fish pavilion. 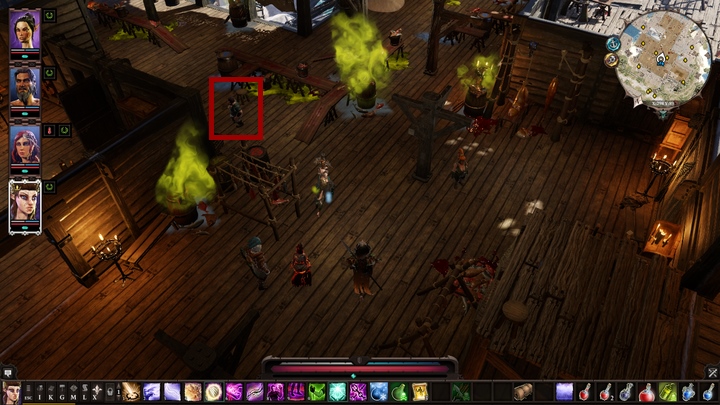 He studies an influence of tainted fish on living creatures. You can offer him your help. After that, Grebb allows you to choose one type of fish and describe how you feel after eating it. In order to complete the quest each of your characters has to taste a fish.

At the upper floor of The Black Bull tavern you can meet Captain Ablewether. During the conversation, she will ask you to silence ringing bells that keep haunting her. 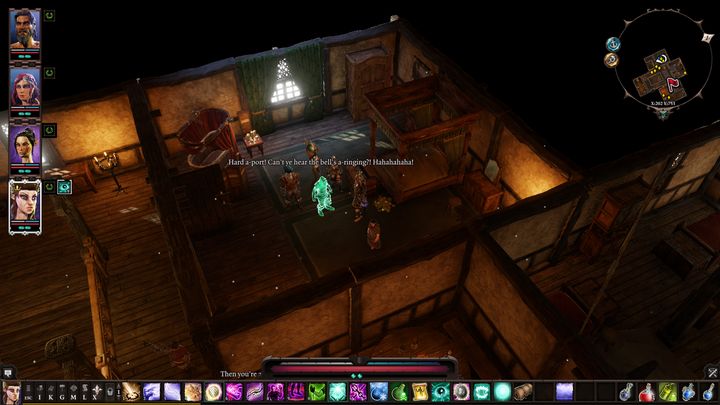 Use Spirit Vision when you are near her and you will see a ghost that is haunting her. The only way to silence the bells is to use Persuasion and convince the ghost to stop haunting Captain Ablewether. If you manage to do that then Ablewether will give you a location of a wreck. There, you can find Captain's Compass Amulet.

Reward: 6950 experience points + 2 guaranteed rewards + 1 from 4 that you can choose from depending on character's class

A sleeping man can be found at the second floor of The Black Bull tavern. 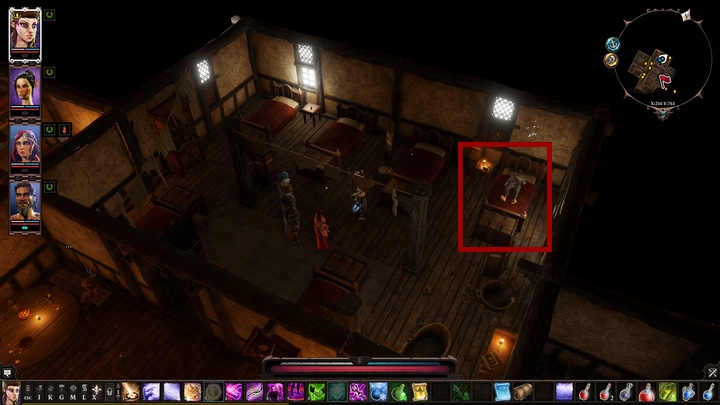 He only mumbles something in his sleep, however, it turns out that he is vulnerable to suggestions. After that you can speak with his chest. The object wants a password from you. If you have a team member that has Jester tag then that person can guess the password. Otherwise, you need to speak with the man again. If you pretend to be his mother, you will get "The Word" password.

Warning: You can also attack the chest - it activates auto destruction sequence which burns all items that were inside of it.

Stranger In A Strande Land 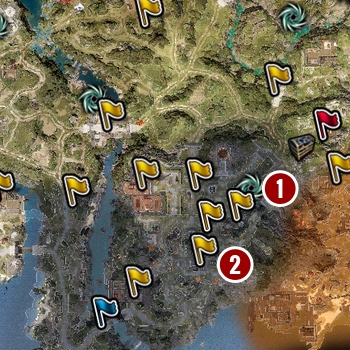 During your exploration of Stonegarden you can activate Spirit Vision near the place for fast travel. If you do that, you can come across a Lizard called Vlinx Creeva [1] that stands next to his grave. 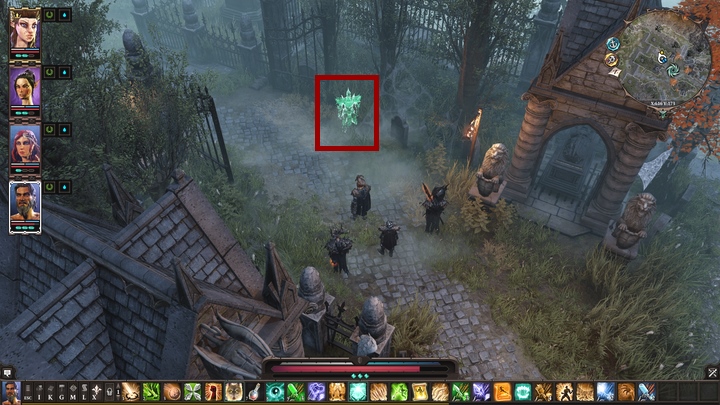 Speak with him. You learn that he was buried in a wrong spot. He also asks you to burn his body in the graveyard's part that is dedicated to Lizards.

You must dig out his body. If you try to eat his limb, you will receive a curse. Because of that fulfilling his promise is a better idea. Take the body and place it between two dragons that spit fire [2]. The ghost will reward you for your actions.

An Eye For An Eye 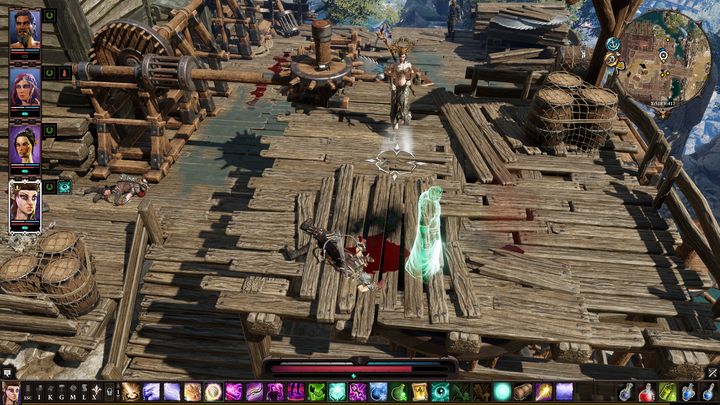 During your fight with Roost's people in Sawmill you killed an archer called Deadeye. When the fight is over you can use Spirit Vision ability. A ghost of a mage will stand next to the corpse. Speak with him. He is very grateful to you that you have avenged him. As a gift, he can offer you an ability from a particular school (the ability is based on which dialog line you choose).

On Bloodmoon Island, you can meet a demon called The Advocate. 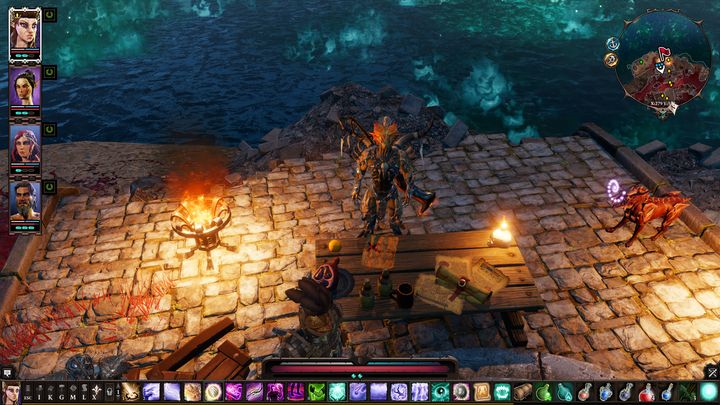 He asks you to retrieve Ancestor Tree. If you agree to his request then he will be able to teach you how to gather an additional Source Point.

A group of Black Rings stations near that tree. You must defeat them. Try to keep your distance because they have powerful units that use melee attacks. Win the fight. After that The Advocate will appear there. The demon is grateful to you and gives you location of Nameless Isle.

In Sawmill you can come across Mudbarrow's ghost. He wants you to learn a location of his gold that was hidden by Slumberjack. 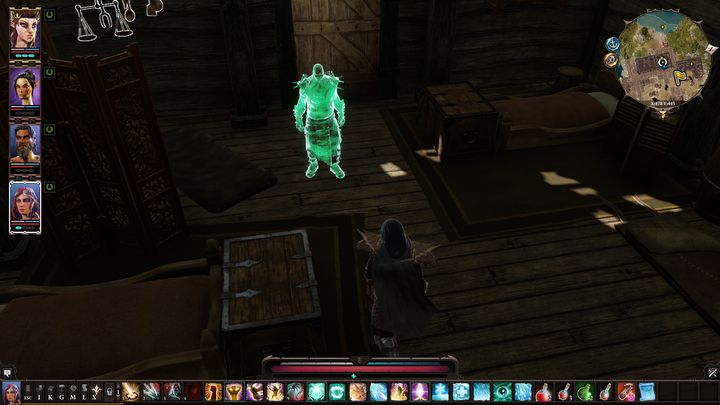 You can go to Slumberjack, ask him about the treasure's location and then kill him. If you decided that you don't want to kill him or Slumberjack was already dead before you met with Mudbarrow then you can convince him that it is time to go to Hall Of Echoes. Regardless of your choice, the quest ends. 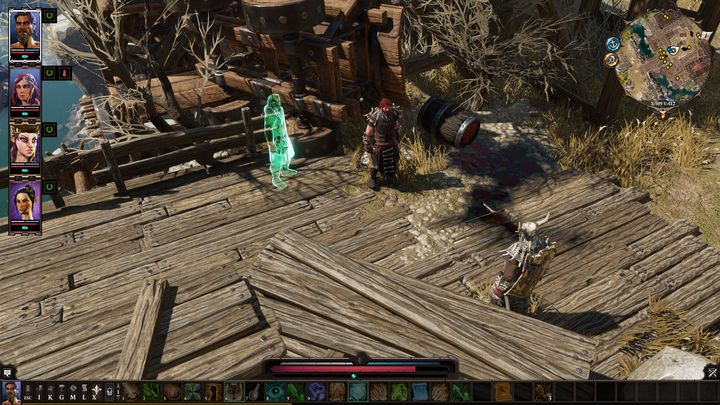 If you decide to talk to him, you'll find out he was burned alive. He wants Pigsbanea, who is responsible for his death, to die. You can commit yourself to this task.

As soon as you've killed Pigsbanea, go back to Syrus to get the reward.

In Sawmill, youw ill meet the ghost of Black Widowmaker - the prison guard of Lone Wolf. 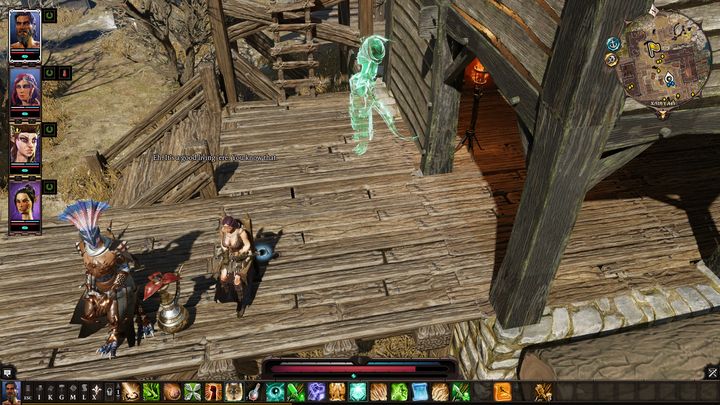 Talk to her and you'll find out she was poisoned by Snakeroot. She wants you to take revenge on her behalf.

As soon as you've completed the quest, go back to Widowmaker.

In Sawmill, you will meet Corbin. You will learn that he's a prisoner to Roost. You can try to set him free.

The only way is, unfortunately, killing Roost. Once you defeat him and the remaining Lone Wolves, go back to Corbin and decide his fate. You can set him free or offer going to Lady Vengeance.

In Sawmill, you will meet the spirit of Edie Engrym. 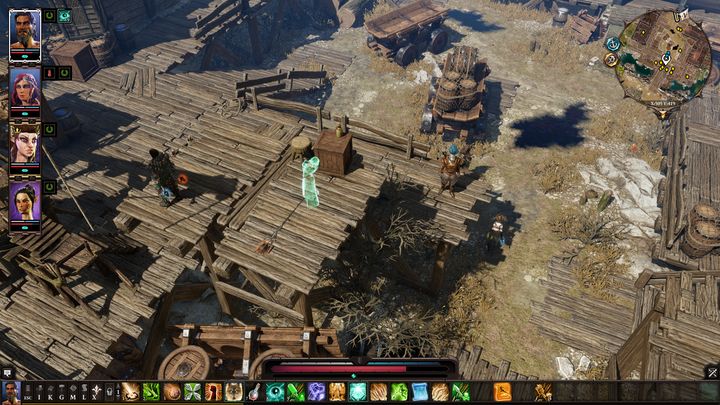 She'll be mad at her death. She wants Firewater, who was responsible for her death, to say her name.

The only possible way is to convince him to do it. If you don't get it right the first time, you will be attacked by him. The exception is Ifan ben-Mezd, who may try several times.

If you manage to convince Firewater to say the name, go back to Edie to finish the quest.