As you walk around the Sanctuary of Amadia, you will find a tower with a maze running to its entrance. The task activates when you open the door leading to the maze.

The entire labyrinth is filled with all sorts of traps, and to open the consecutive doors you will use the skulls found in the maze. Some of them appear on pedestals when one of your characters activates the right lever, and other skulls are found when walking through the portals. If you want to avoid collecting them you can use teleportation.

The simplest way leads through the room with The Historian, shown in the image below. Upon entering, the gargoyle will send some undead to fight you. They will mainly attack with fire. It is worth using the Bless ability here, which turns fire into holy fire, that will inflict great damage to any undead. After the fight you can also remove the curse from The Historian. You can do so when he stands in a pool of blood by using the Bless ability. The easiest way to do this is to teleport him into such a pool or use the Rain Of Blood ability. 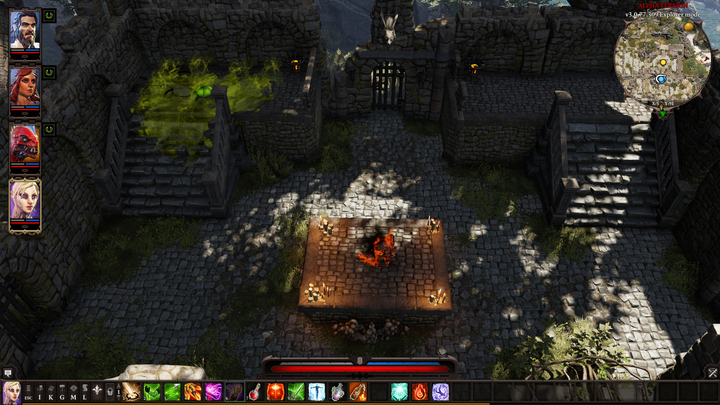 The way to the tower leads through the door under the gargoyle. The task will end when you reach the stairs leading to the tower.

Note: If you have already completed the task named The Vault Of Braccus Rex, you can show the Gargoyle the ring taken from Trompdoy's real body. The Gargoyle will automatically recognize you as Braccus Rex and will move you directly to the tower.