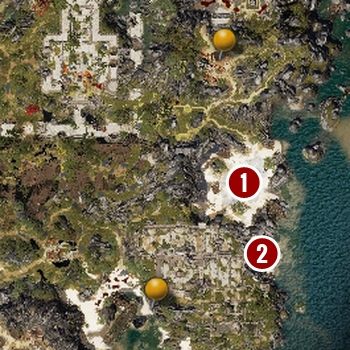 In the area of ??the maze there is a beach covered with ice. There is a dragon there, that has been imprisoned. Destroy all the totems that surround the creature. Then, you can talk to the dragon. You will learn from him that his name is Slane [1] and he was bound by a witch named Radeka. Only Radeka's Purging Wand is able to break the spell. Your task is to retrieve the item for him so that he can free himself.

Radeka inhabits the Skull Cave [2], which is located near the beach, so you will have no problem finding her. The problem, however, is the cave itself, which the witch quite successfully filled with traps. If you do not have a trap disarm toolkit, then you will have to break through at the expense of losing health. At the end of the cave you will meet Radeka herself. She will not be willing to cooperate, so no matter how the conversation goes, you will have to fight.

After winning, search Radeka's body and take Radeka's Purging Wand and then return to Slane with the item. At this point, you can choose one of the two ending options.

If you choose to give the item to Slane, then he will be able to break the spell that shackles him. As a reward, he promises that he will come to your aid when you truly need it.

Reward: 4 guaranteed rewards and 3 to choose from depending on classes in your team

If you don't give the item to Slane, you will have to face a dragon.