The black cat quest is one of the biggest secrets of Divinity Original Sin 2. This page contains a walkthrough for this quest and lists the rewards for it - you'll learn where to find the black cat, how to save him, and what are the rewards for rescuing the cat.

Who is the black cat?

Right after you get shipwrecked on Fort Joy island, you will encounter a black cat. You can't miss it, in fact, as the cat will approach you and refuse to leave your party. Talking to it will give you nothing. Even if have the Pet Pal talent - which we recommend you to have - the cat will prove to be antisocial and... prone to twisting things around, as it accuses YOU of following it. Nobody knows whether the cat is a victim of a Polymorph spell or just your typical feline bastard - what we do know, however, is how to complete the related quest and what do we get for keeping the kitty alive.

How to save the black cat?

The charming black cat isn't the nicest traveling companion. We have no control over its actions, and often it will vanishe or get killed before we even notice. Well, the OBJECTIVE of this mysterious quest is to escort the cat outside the Fort Joy stronghold. In other words, you simply have to bring it to The Hollow Marshes. To keep the black furball alive, you'll have to remember about several important things: 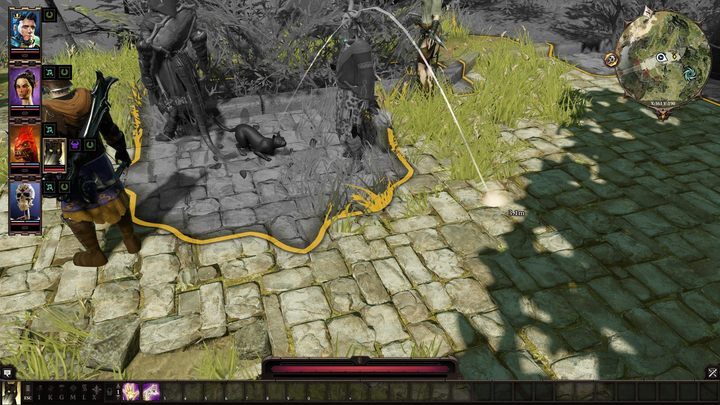 Thanks to Black Cat Feline Leap Skill you can act like a... cat.

Rewards for saving the black cat

Assuming you eventually manage to get the cat to The Hallow Marshes safe and sound (no matter which route you took), it will disappear. You'll receive a notice that the cat, grateful for your escorts, has become your friend. Completion of the black cat quest will give you a special ability. Black Cat skill will allow you to summon the black cat in combat (without spending Source Points). Other than helping you in battle, the cat can also jump and switch places with its owner. This means that you can send the cat nearby an enemy mage, and then switch it with your fighter, teleporting them to the enemy. Skillful use of the cat can give you great advantage in combat. It's an additional teleportation, without spending you party's action points!

Feline Leap - your cat can jump in combat. It's very helpful if you want to reach higher grounds or jump straight to the enemy.

Swap Places - it's a teleport skill. Your cat can swap places with his master. Very handy in battles for atacking or fleeing.

The stats of the summoned black cat depend on the current level of its owner and their Summoning skill. Consider investing some skill points in summoning if you plan to rely on the cat often.