This page of the Divinity Original Sin 2 guide contains a detailed description of Inquisitor. You'll get acquainted with the basic information on this class, recommended playstyle, as well as its biggest advantages and potential disadvantages.

Inquisitor is a hybrid class, which on the one hand has special magic abilities, but on the other hand doesn't avoid melee combat on middle distances. Using telekinesis, Inquisitor can use various weaponry that deal ranged elemental damage.

You should invest in passive endurance, as his health regeneration is closely related to the course of the battle, and as long as you are victorious, you have a chance to get out unscathed. On the other hand, when the situation complicates itself, you'll have to spend a lot of action points to remain alive.

He is especially productive with any character that can apply bleeding on a target, or call a blood rain. If you managed to acquire the book with the mentioned ability, make sure that the hero learns it. 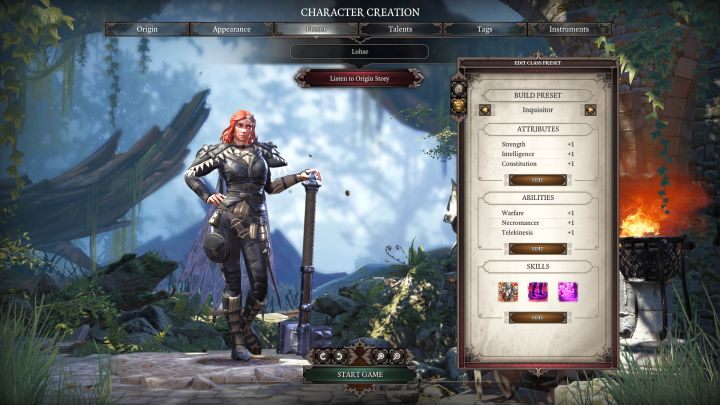 Inquisitor in the class selection screen.

You can find base parameters for this class below.

In the case of the Inquisitor, three attributes were improved:

Executioner - If a hit dealt by a hero was deadly then this character receives 2 additional AP during the same turn. This effect can be activated once per a single turn.

An Inquisitor has access to two schools (Warfare and Necromancer) which means that they can choose from 8 starting abilities. The default abilities are the best ones that you can choose from - they greatly compliment Inquisitor's play style who fights at a close distance and needs both a way of healing their wounds and damaging enemies. Because of that you shouldn't change anything and focus on using Battering Ram, Blood Sucker and Mosquito Swarm.