On this page of our guide to Nioh 2, you will find out how to defeat the final boss of Nioh 2 - Otakemaru. 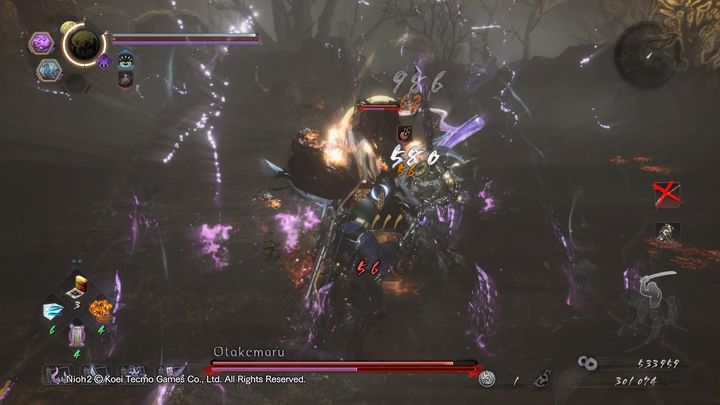 Otakemaru is the final boss of Nioh 2. In the battle, he uses three types of Yokai - Feral, Brute, and Phantom. In addition, he has 3 phases and activates them depending on the current level of HP. At first he fights with three types of Yokai. When he has about 60-50% HP, he starts the second phase, in which he gains his true form and his attacks change depending on the type of sword. The third phase is activated when the boss has about 20% HP. He gains two new attacks, which are described below.

This boss has many attacks, and every form adds another new attack. It will be difficult to react to each one, so instead of describing the standard range of his movements, we have prepared general advice on how to fight against each attack type and behave during each phase. It's also worth mentioning that every time the land of Yokai is activated, then Tokichiro helps you in the battle with his guardian spirit, the jumping monkey. 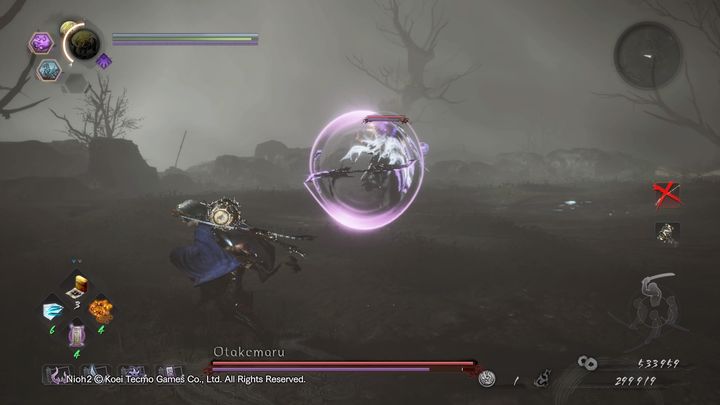 Phantom: He fights with his medium range blades. His injuries are minor, but very quick. Watch out for the spinning blades. Pro-tip: attack him from the right side and from behind his back. All his attacks should can be easily avoided if you use a right-side dodge. 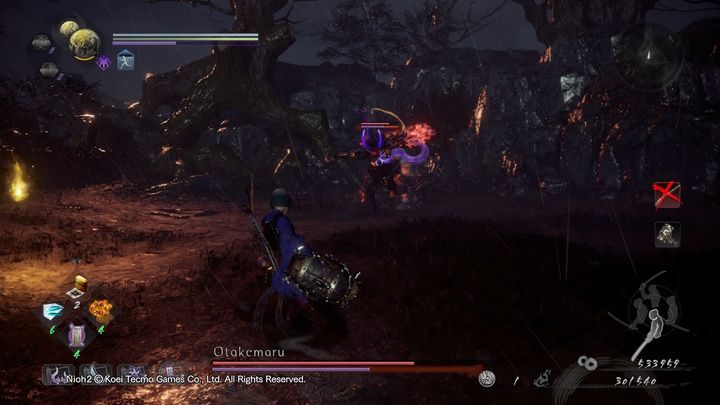 Brute: In this form, Otakemaru won't feel any of your attacks (he cannot get stunned in any way). Even if he receives powerful strikes, he will keep launching his attacks. That's why it's important to get behind him as often as possible and attack when he attacks. You're safe behind his back - his attacks are slow, so they shouldn't reach you, and that's the best way to fight him. But be careful when you get hit, as this form deals the most damage. 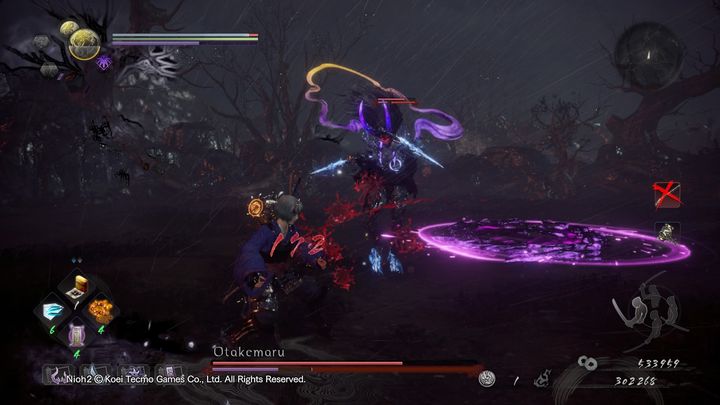 Feral: This form is the hardest to fight. His movements and attacks are very fast. In fact all you can do is block his attacks or run away and provoke a Burst Attack. When you notice this move, perform a Burst Counter to inflict heavy damage from Ki and force him to quickly transform.

When his HP drops to half, his form changes. He can no longer switch between the three available types. Now he is fighting in his true form. You will now have to fight a large Yokai wielding a one-handed sword. This sword switches elements - it can be fire sword, frost sword and lightning sword. We have prepared a detailed description of attacks associated with various types of the sword. In neutral mode, Otakemaru attacks with a sword and launches a few cuts, plus he can launch a Burst Attack with a combo. All you have to do is use Burst Counter and deal him a lot of damage from Ki. 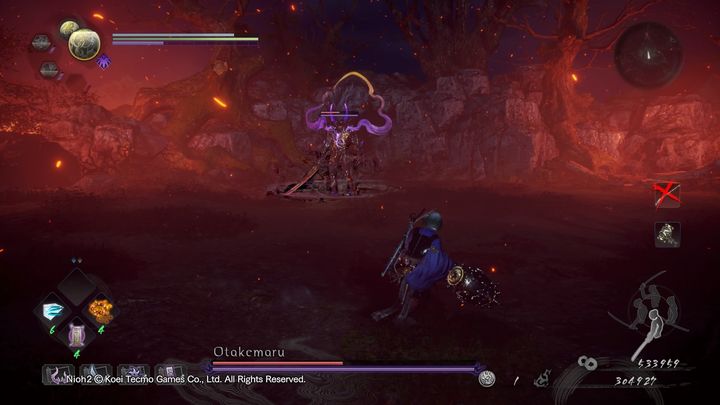 Be careful when he sticks his sword into the ground when he has a fire sword. At this point, he causes an explosion around him, inflicting very heavy damage. Just run away if you notice this skill. 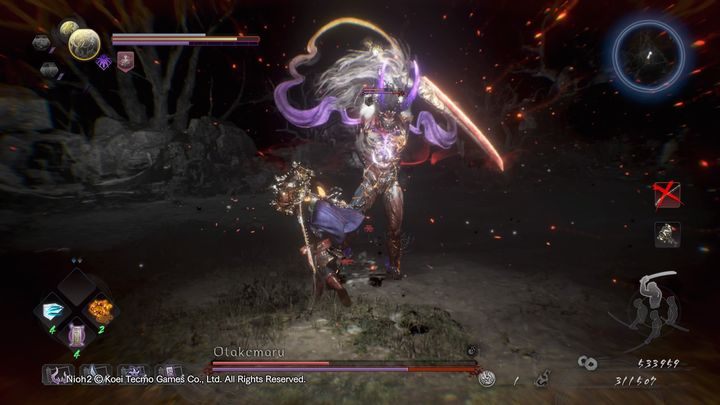 When you're in front of him, he can create a fireball that will explode right in front of him. It is a fast attack, so it is best to dodge to the side and start attacking the enemy from behind his back.

When he sticks his sword into the ground, he creates two water fields where you stand, one by one. Instead of dodging, run until he finishes casting the frozen fields. After a while, ice will emerge from them that causes a lot of damage. 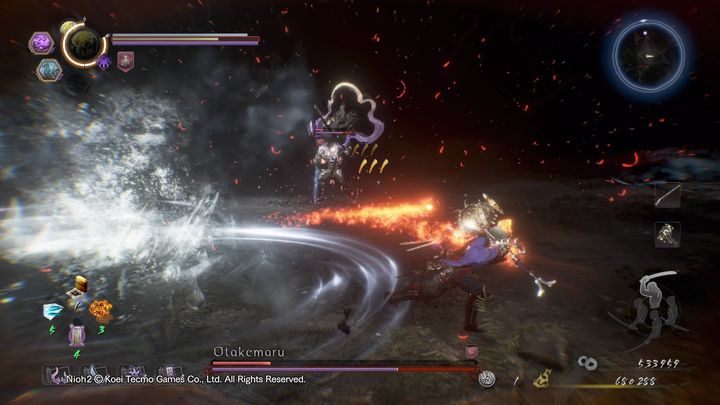 Otakemaru can also summon seven icicles of ice that appear above his head. They'll start flying fast in your direction, from left to right. Run sideways when you notice that they have appeared over his head.

When he stabs his sword into the ground, it triggers an electric field around him. After a brief moment, other lightning strikes the ground, inflicting damage and placing electrocuted status on you. When you notice this skill, move away to a safe distance and do not attack until the enemy has finished casting his special attack. 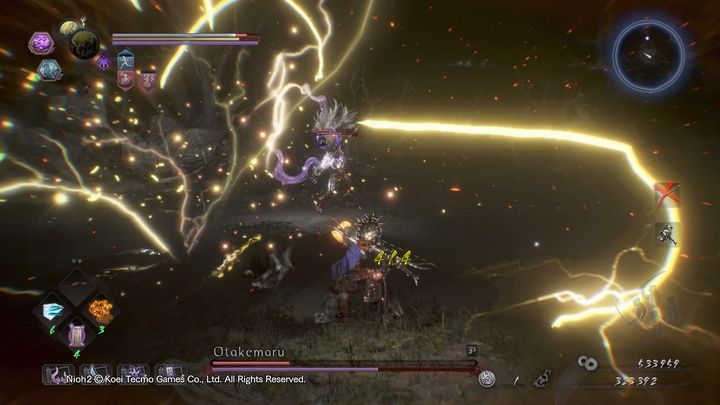 Otakemaru can make a quick cut over a short distance, causing lightning to strike the spot where he made the dash. Besides, at the very end of this attack he strikes with his sword one more time.

The boss can also throw the dagger. When the latter hits the ground, it may spawn another electric field. He does it when you're far away from him.

This fight is not much different from the one in the second phase, except that he now has three large swords beside him. They can literally kill you with one blow, so it's important not to get hit by them. 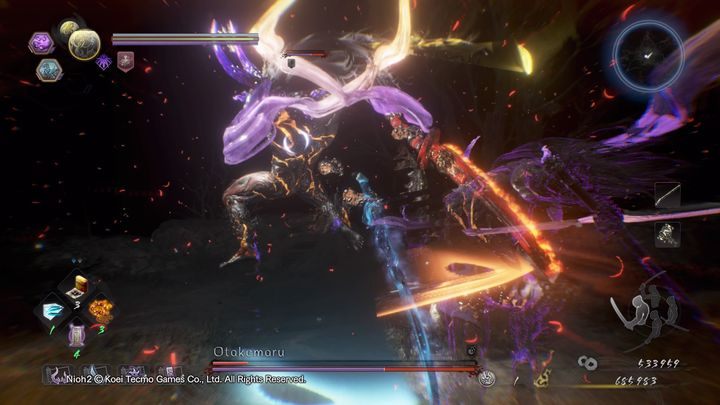 He gains two new attacks, the first consists in firing many different types of swords into the air. Then, all these swords fall from the sky. This attack is not very accurate, but you have to watch out for it as it inflicts very heavy damage. The best way to notice this attack is to walk behind Otakemaru's back. Then you should be reasonably safe. 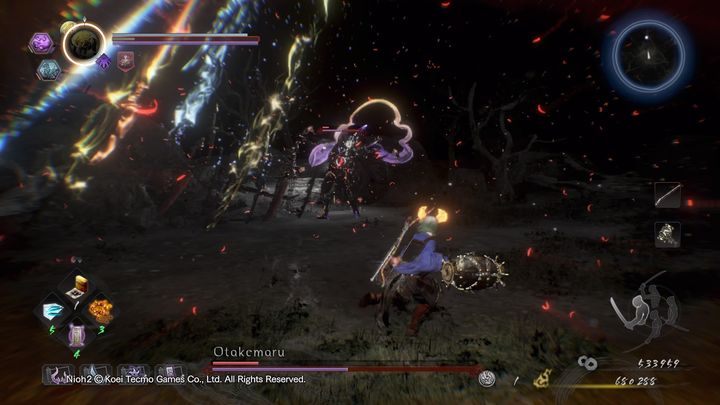 The second attack is the new Burst Counter, which is very deadly. He throws his swords into the air, combines them together in a spinning circle, and then he twists them around his own body - once to the left, once to the right. After that, he hurls them at you with a very fast speed. Only then can you make Burst Counter, but it's very difficult. This special strike is fast. Additionally, it can kill you with one hit.