The Two Faces of Hospitality is the second main mission of the fifth region in NiOh 2. This page of the guide contains a walkthrough for this mission.

Talk to the Onmyo mage - he will give you an item. The first Kodama in this location is on the left of the gate. 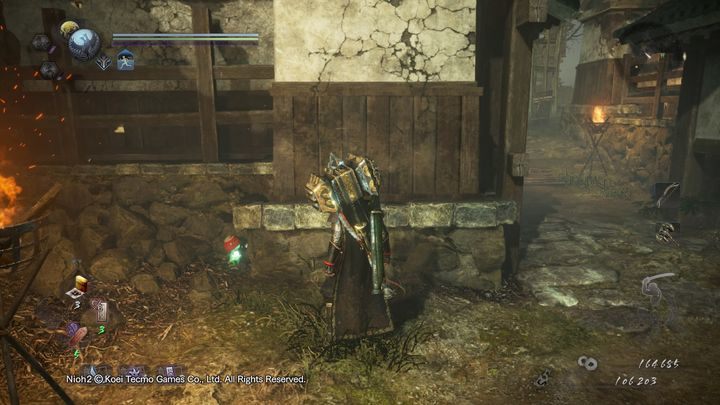 Pray at the shrine and walk through the gate. There is a ninja on the left in the thicket. If you can't see it, take out a bow/firearm and keep moving the sight until it turns red. There's a building right in front of you - the door can be opened from the other side. A soldier is patrolling the area on the left. 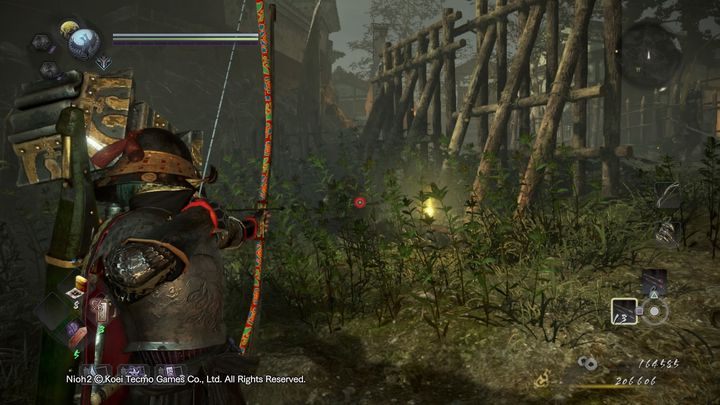 On the right, by the watchtower, there is a hidden opponent. Kill him and go left. There, at the next watchtower, you have a soldier. A little further away, you will encounter a more powerful soldier with an axe. Defeat the opponent sitting on the ground first. Another enemy is standing atop the tower - climb up the ladder and kill him. 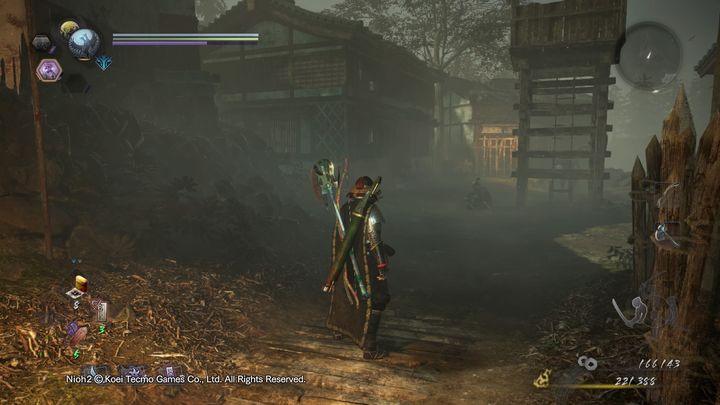 A hot spring is right of the watchtower - use it to restore health. Be careful, though, because there is an opponent in that spring. Kodama is behind the door on the left. 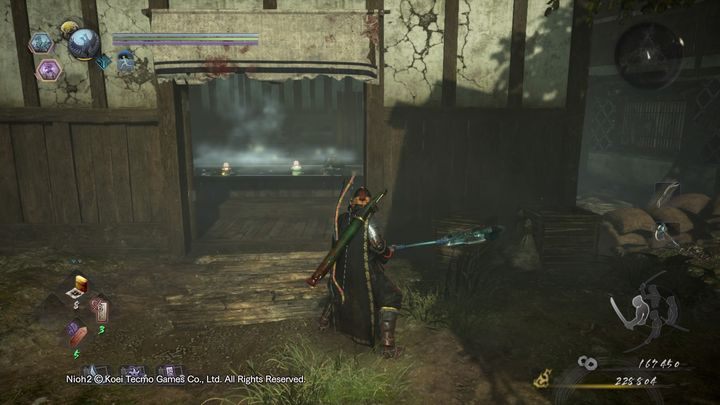 Leave the room with the hot spring and turn left to the next house. There you will see a Yokai mist - it will spawn a Flying Bolt. Watch out for her bandages. Most of her attacks can be easily blocked, but be careful of her grab. There is a door on the right that you can open. You will also find a small chest. 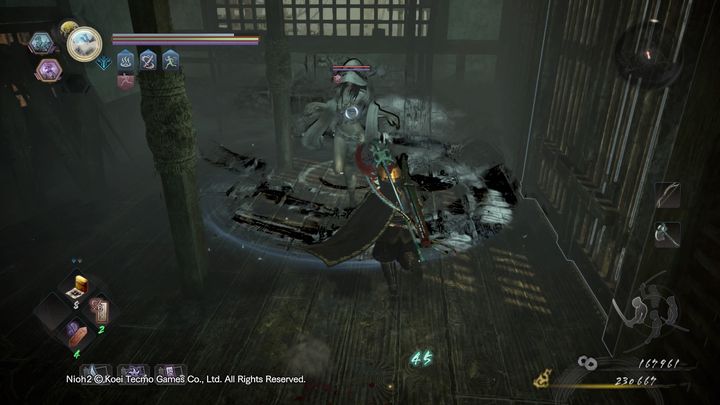 Go back to where the second watchtower was and go straight down. Turn left immediately and climb the wooden scaffold - you will encounter an opponent and a chest. 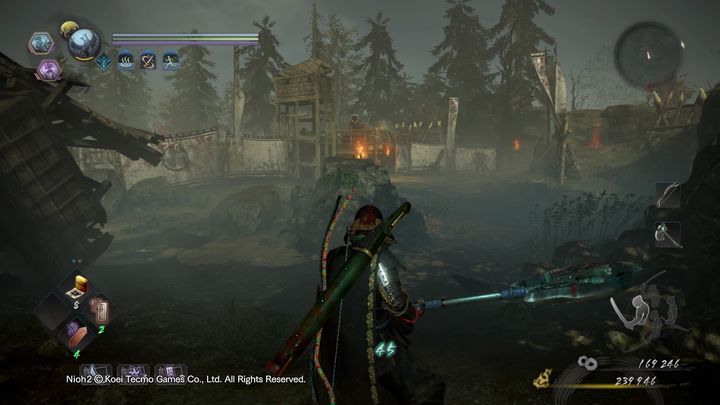 A cannon is straight ahead - it will shoot at you from time to time. If you want to avoid shots, go straight at it and then go left. There is a road leading to the enemy operating the cannon. Kill him - you can use the cannon to shoot at enemies. 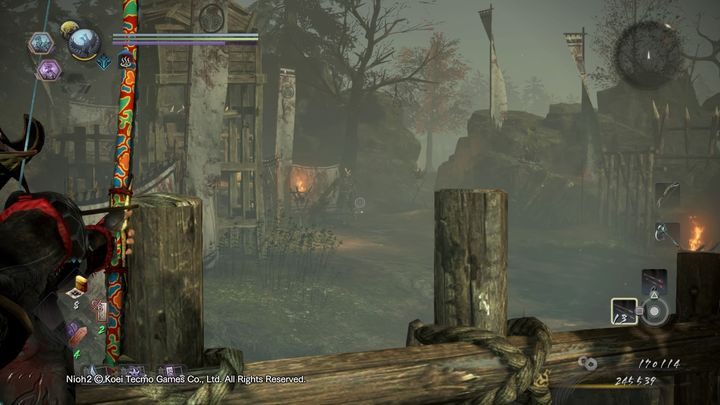 After defeating them, go further up, and you will find the second shrine. 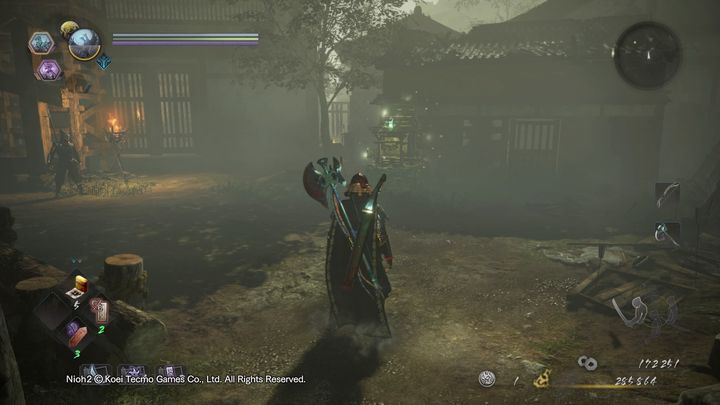 Hanzo is on the left of the shrine. Talk to the NPC - he will help you cross the bridge. After talking to Hanzo, go to the gate but don't open it. On the left of the gate, behind the wood, you will find another Kodama. Instead of opening the gate, you can also climb the watchtower on the right and shoot at the opponents standing on the bridge. 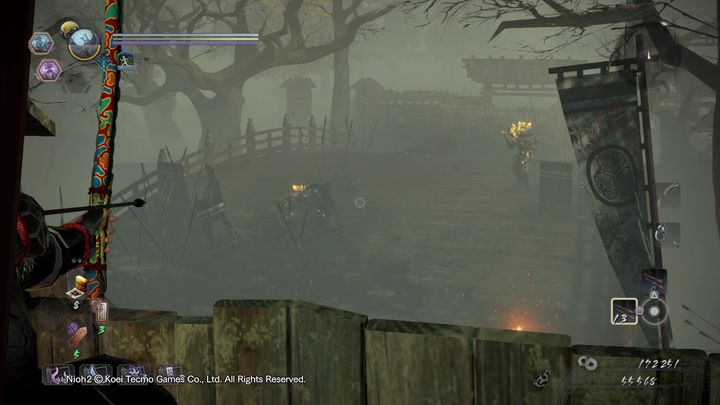 The bridge serves as an arena where you will encounter increasingly more powerful opponents. There are two Yokai soldiers and a large skeleton warrior. Defeat the soldiers first, then deal with the skeleton. With Hanzo's help, this fight should be easy. 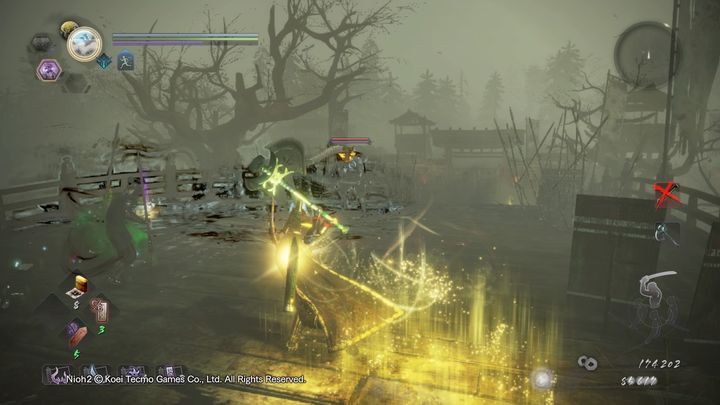 Then, you will face two skeleton warriors with a bow, a Wheelmonk and a Rokurokubi. Defeat the skeletons first and then take care of the Wheelmonk. Leave Rokurokubi for last - it will slowly be heading your way. 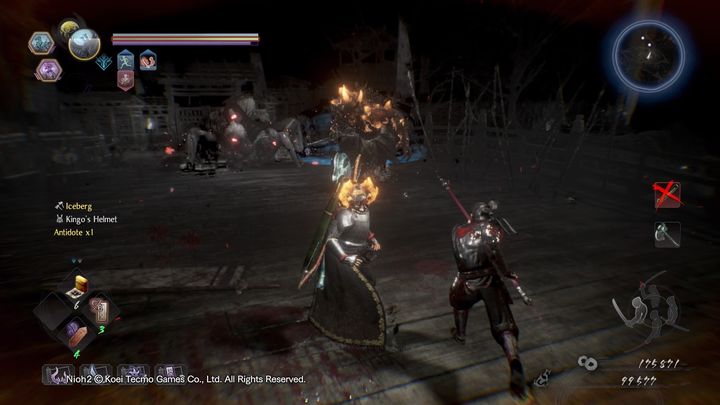 The last wave has Yoki, Mitsume Yazura, and Yokai Realm appearing on the entire bridge. Try to fight a different enemy than Hanzo. It is best to kill Yoki first - even though this enemy can deal massive damage, it is much easier to defeat. 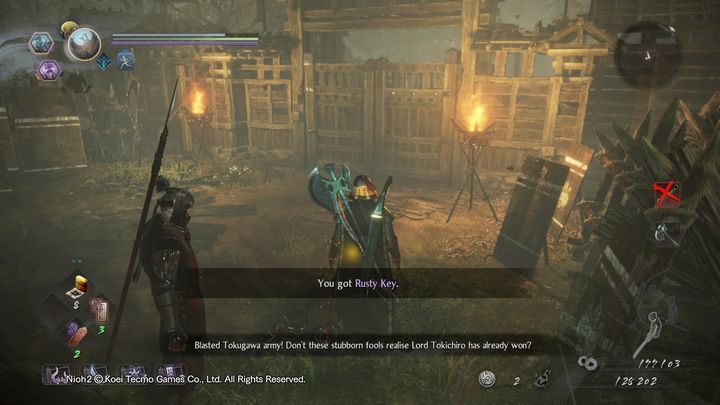 Find a body at the other end of the bridge and take Rusty Key from it. Instead of going further, go back to the shrine. There is a door at the watchtower that you can open with this key. Open the chest. If you have lost a lot of your health and elixirs, rest at the shrine. Cross the bridge again, open the door and keep walking. 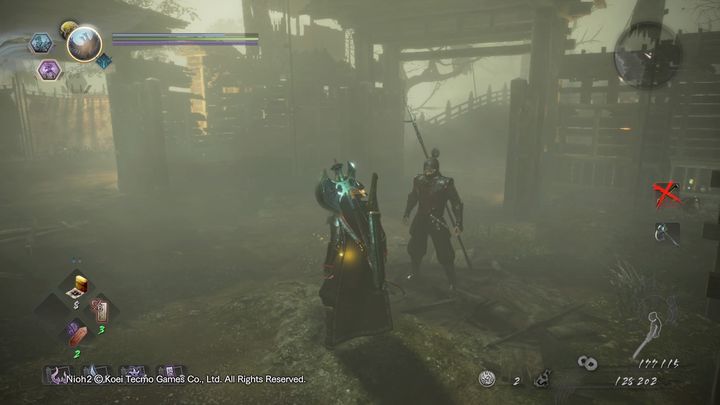 Open the door - on the left you have a Scammpus, and on the right, you have a path leading further into the location. If you have completed the previous side missions, Honda, another NPC you encounter nearby, will join you. 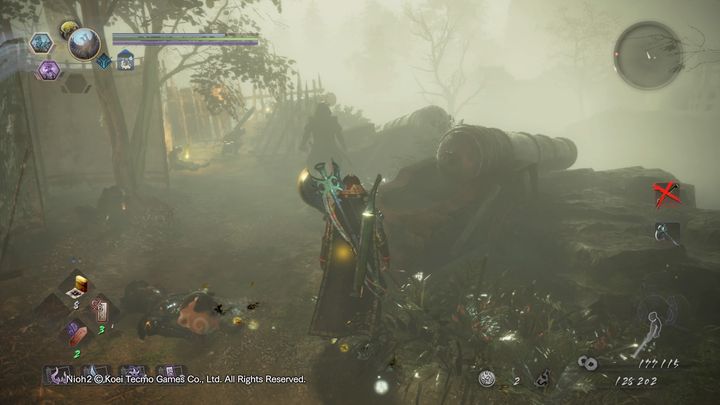 More enemies are on the right, near the broken cannons. You can shoot one opponent and defeat the other with ease. Shoot the last cannon on the right - this is the only working cannon. Use it to deal heavy damage to opponents. 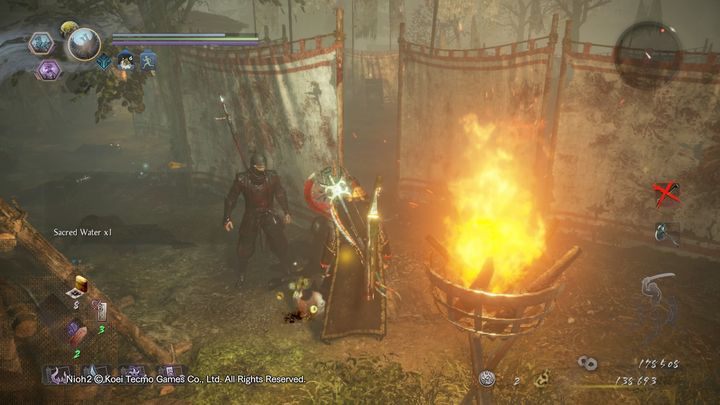 There are four enemies in the room covered with cloth. One of them is a general which is harder to kill. It is best to shoot one of them with a firearm before starting the fight. 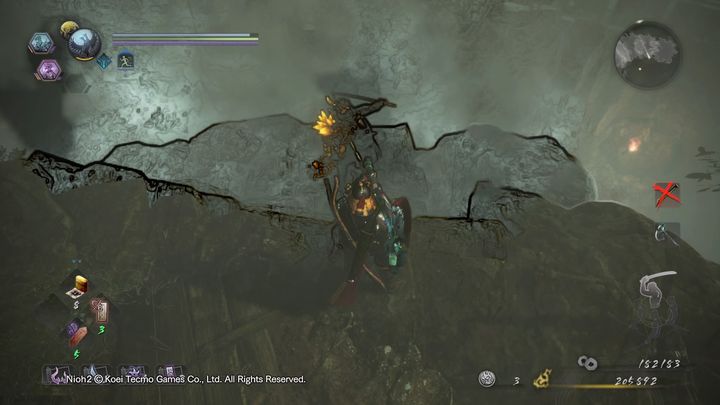 Jump down and defeat the Yokai soldier. Go right instead of going left. You go back to the previous location where you will find Kodama. 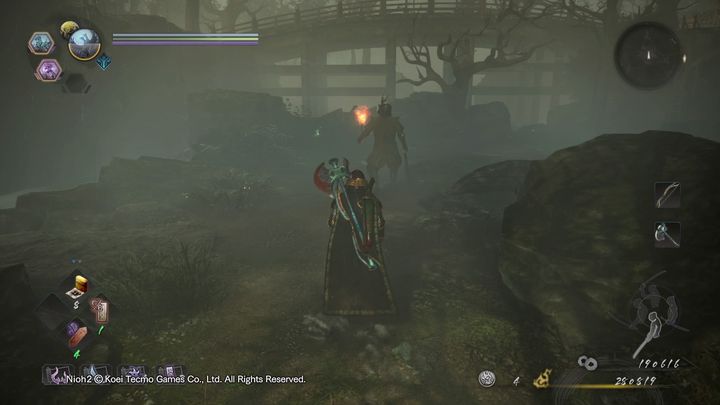 The area is patrolled by one enemy, the other is hidden by the boat. There is also a Kodama hidden next to it. 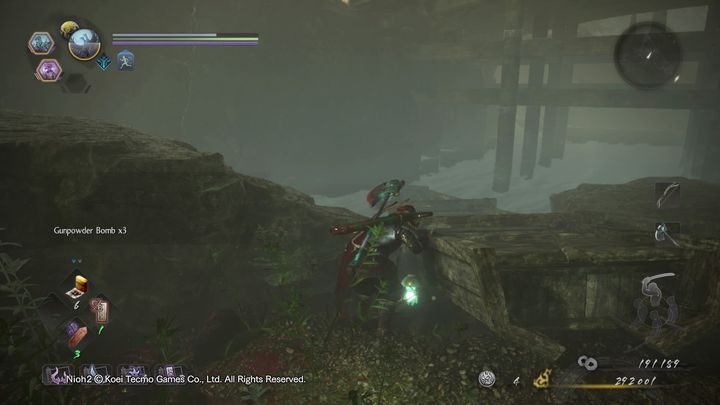 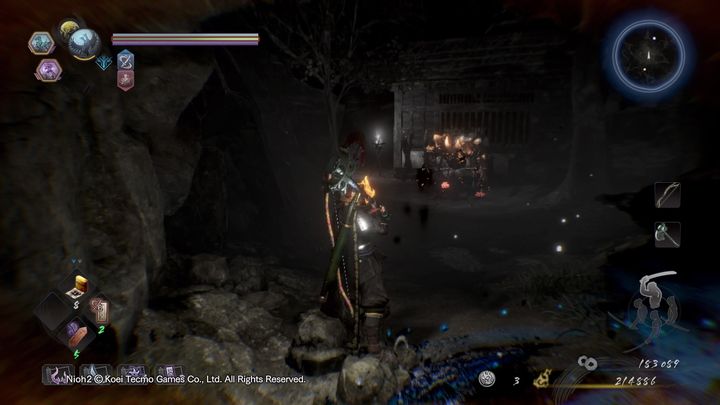 A little further on, you will encounter Yoki and a smaller skeleton warrior. By killing him, you will purify the location from the Yokai Realm. Enter the house on the right and open the chest. Climb the ladder and defeat the opponent using the cannon. 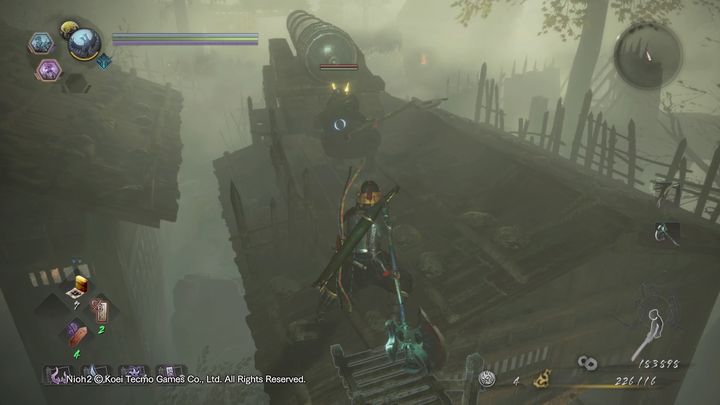 After defeating him, fire one cannonball and jump down. 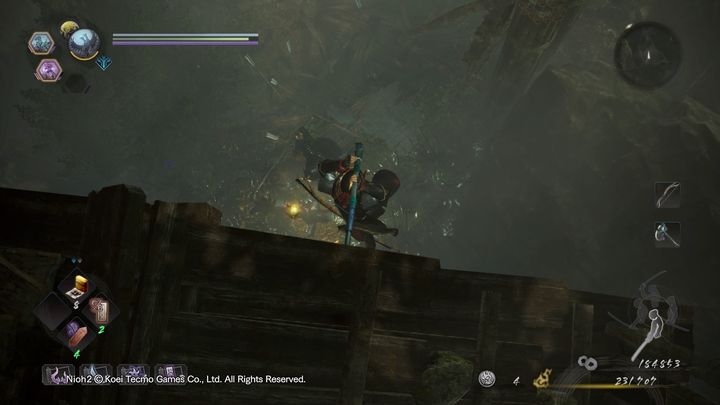 You can perform a downward thrust from the air on the opponent below you. Next, you will encounter a dog patrolling the area and a few soldiers. A Yokai will emerge from the Yokai mist in the passage. 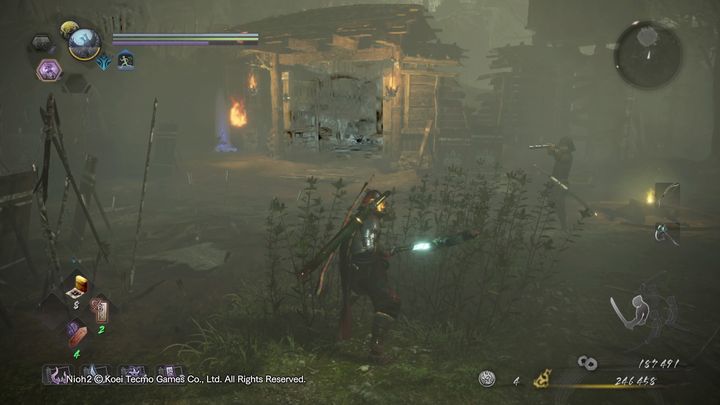 After defeating him, go to the right, climb up the ladder where the watchtower is - you will find another Kodama. 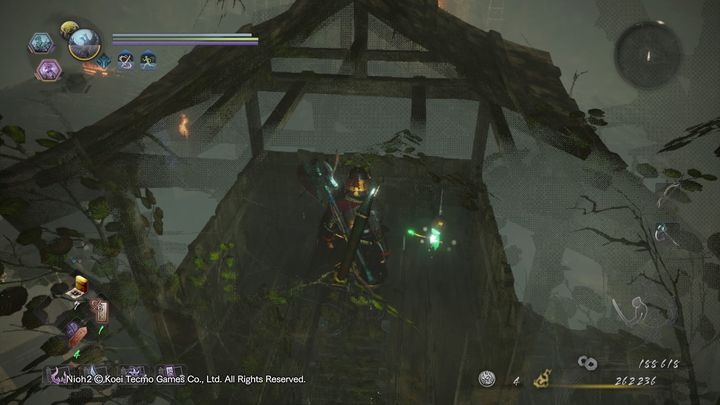 Go up and walk through the passage that was guarded by Yoki. This is where you have to leave Hanzo and Honda. Get up the ladder. 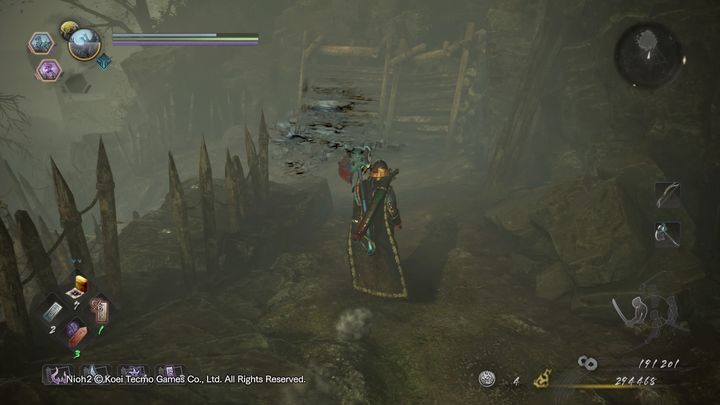 On the left, you have a Yokai mist - a Wheelmonk will emerge from it. Beat him, go down a little bit and open the chest. Go back and head up. 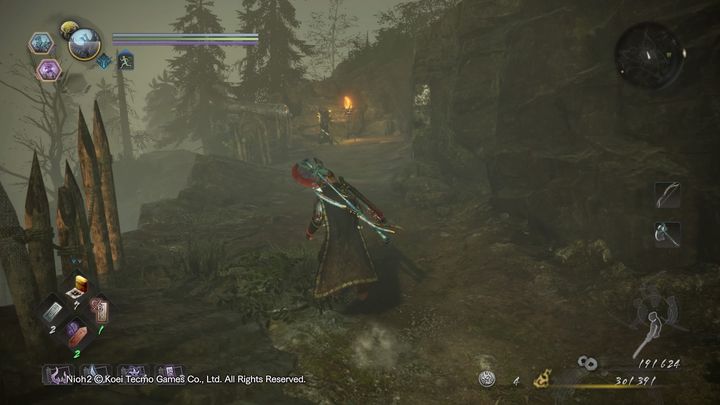 Defeat the Yokai soldier who uses another cannon. After defeating him, keep going up until you find the last shrine in the location.

Pray at the shrine and cross the bridge - you will encounter more opponents, including another powerful soldier who fights with two swords. 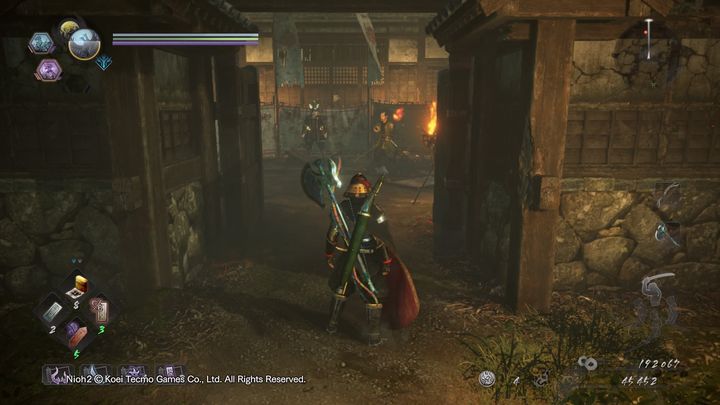 Shoot the enemy with a torch in the head. Use mid/high stance on the enemy wielding two swords and attack him with strong attacks. After defeating him, open the wooden door. Turn left - you will encounter a Rokurokubi disguised as a soldier. After killing him, destroy the statue in front of you. 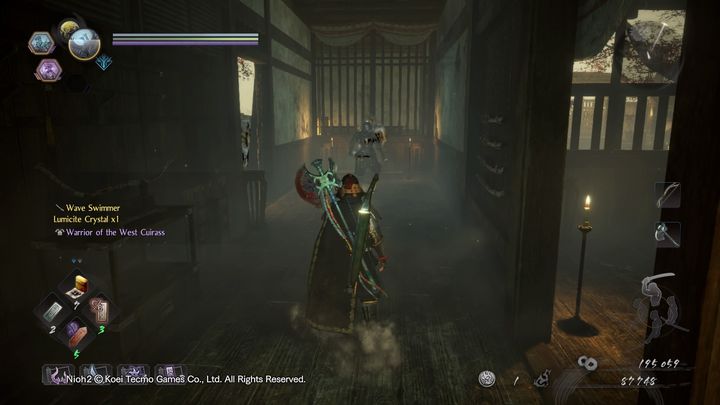 It will reveal another Kodama. Interact with it and then go outside. A Yokai mist is on the right - a Flying Bolt will emerge from it. Now go back to where you opened the wooden door. 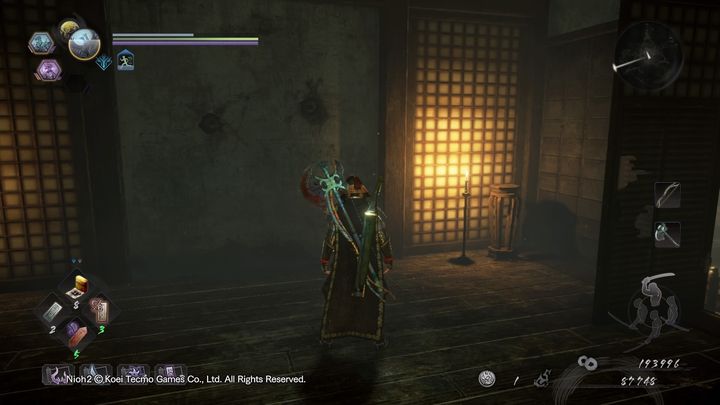 Nurikabe is on the right. Use the right gesture. Inside is a mimic chest. Beat the creature or imitate its gestures. 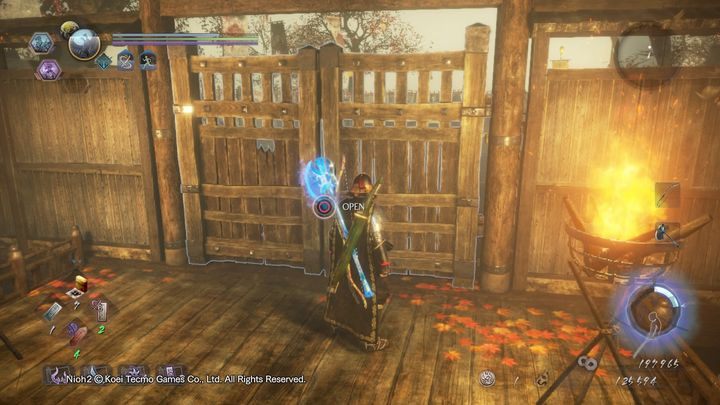 A little further on, you will encounter a single Yokai soldier. Collect items and head to the door. When you open it, go to the arena with Tokichiro, the location's boss. The boss fight is described in a separate chapter.