The Sun Sets On Mount Tenno is the third main mission of the fourth region available in Nioh 2. During this mission you have to confront two bosses. This page of the guide contains a walkthrough for this mission.

Go straight ahead and pray at the first shrine. Then you will see a large, open area in front of you. The path to the caves on the right leads to the door that will unlock the shortcut, there is no point in going there right now. Kill Gaki near the corpse. There is a wooden structure on the left, climb over it and watch out for a skeleton wandering nearby. 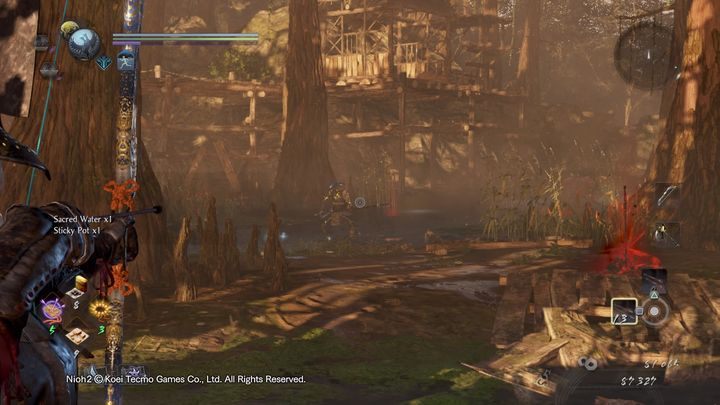 Kill human enemies at the top, then you will find a large chest on the left and an item to collect on the right. Jump down and kill Yoki and the Skeleton Warrior. Watch out for another human enemy standing on the cliff on the right, who will shoot at you. Defeat Nure-Onna, who will arrive from the land of Yokai. 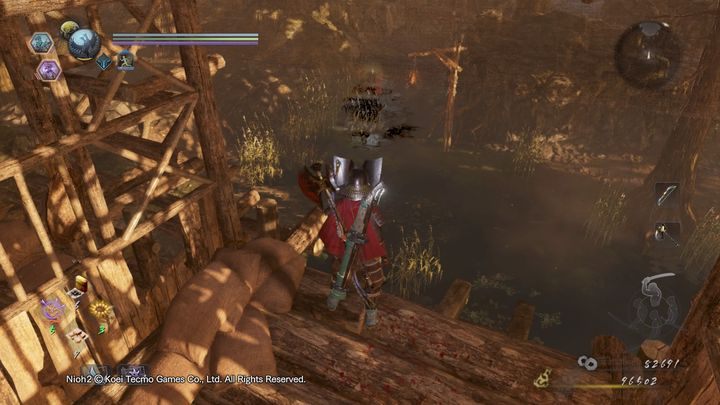 Go ahead and climb up - there's a shooter on the right. You can find a Kodama behind the tree by which he stands. 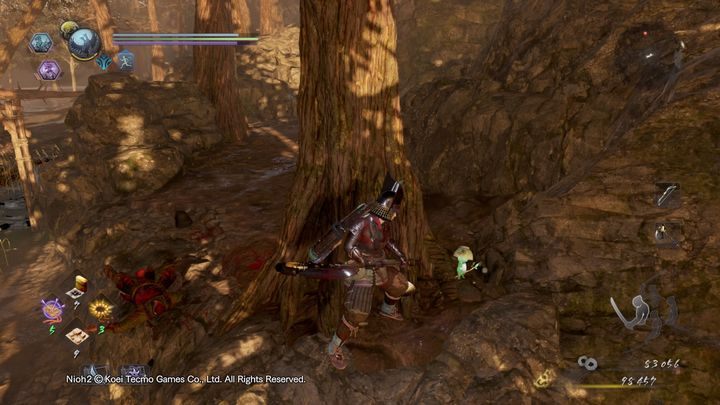 In the next area, shoot down two shooters who are on the top floor of the structure, and then kill a Waira located at the lower ground. Go to the right and open the door, which is the aforementioned shortcut. Instead of crossing the bridge, go left and reach the top of the structure. 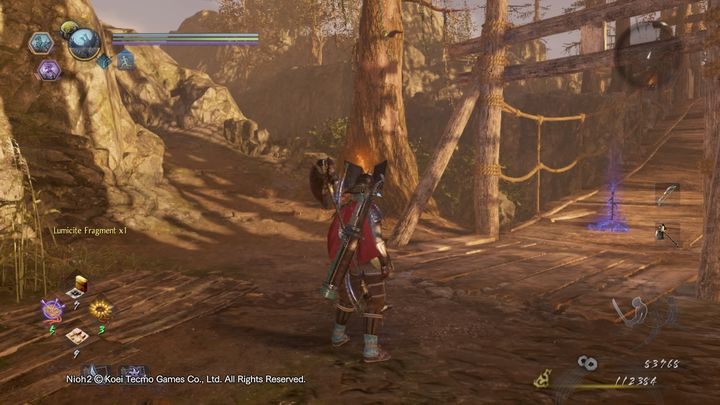 Move across the wooden footbridge. A new will come across a new type of Yoki in the building that uses Kusarigama. He is much faster than a typical Yoki and much more dangerous, cause he is able to perform lots of swift attacks. 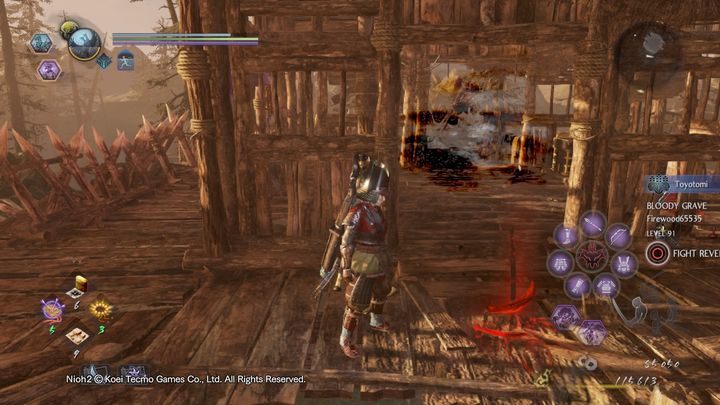 By defeating it, you can open the chest, which is in the middle. Use the ladder on the left side - lower it to unlock a faster access to the upper floor. 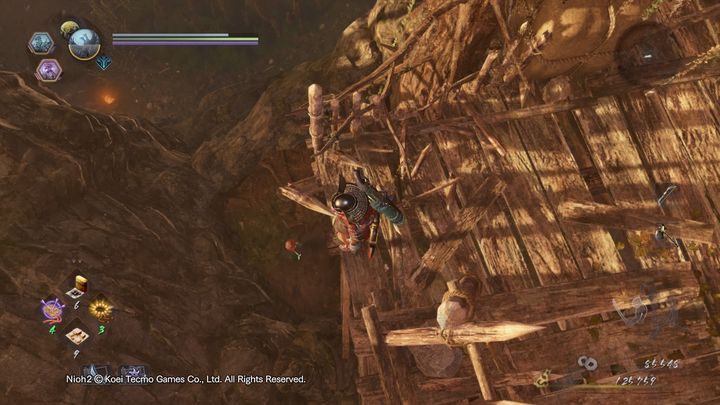 Then go to the corner where the railing is broken and jump down. You will find another Kodama. Then you will find yourself in the initial location, but thanks to the shortcut that was opened earlier, you can return to this place very quickly. Head towards the bridge. 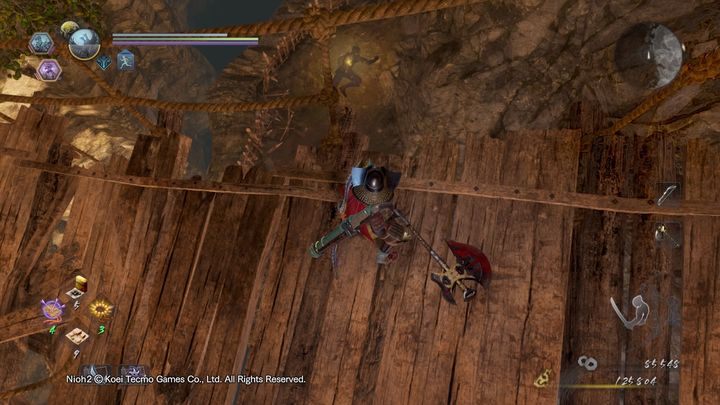 There is a cliff on the left side of the bridge where you can jump. The road towards the bridge leads you to Yokai land, but it's much better to jump down as it makes it easier to fight your opponents trapped inside Yokai land. 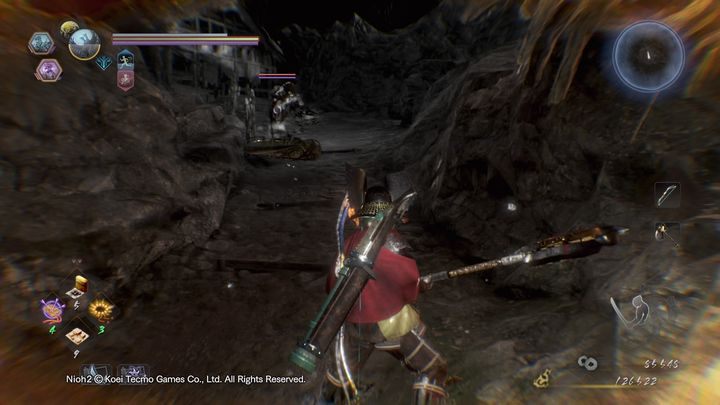 Head up, there you'll encounter Nure-Onna. Defeat her and climb the ladder. That's where you'll come across more shooters. They may interrupt your melee combat and make it more difficult. Shoot them down and wipe them out. Near one of them, behind the platform, there's another Kodama. 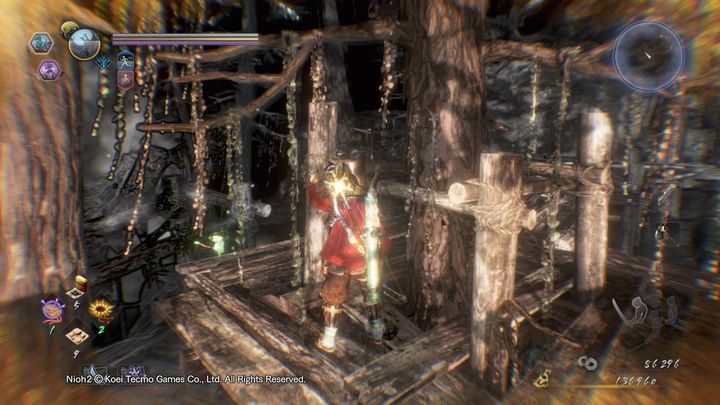 In order to neutralize the effects of Yokai land and clear the location, you have to destroy the large yellow crystal, which also blocks your way. The easiest way is to jump on it from above and perform an attack from the air. 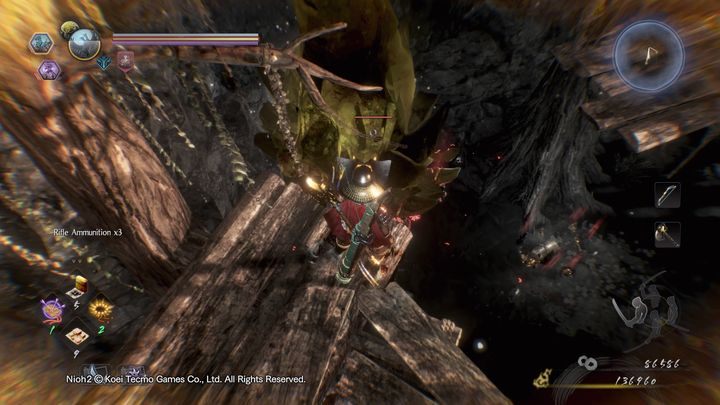 Once the crystal is destroyed, you can pick up various items from the cleaned location and open the chests that have just been unlocked. After all, go up the path where the crystal blocked the road. Open the door, go ahead until you're in the field. There you will find a second shrine.

There are some doors in front of you - you will unlock them later from the other side, cause it's a shortcut. Meanwhile, go to the right, by jumping into the water. 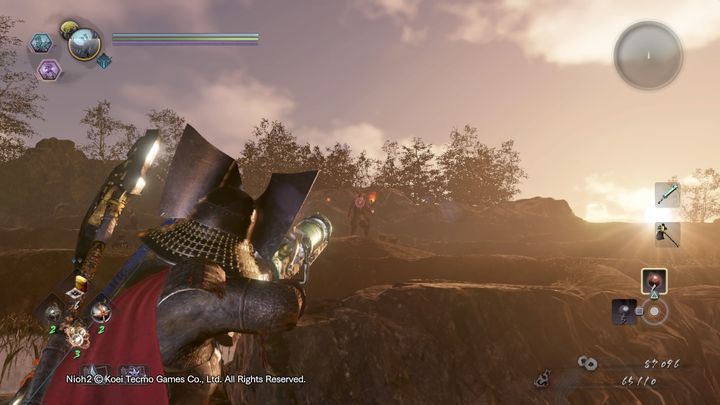 You have to head up to the right. But beware of the huge number of human opponents patrolling the area. You'll come across them every step of the way. Most of them are ranged opponents. The best way to deal with them is to shoot them from a safe position. There's no point in fighting everyone up close, because most of your opponents will attack you at the same time. 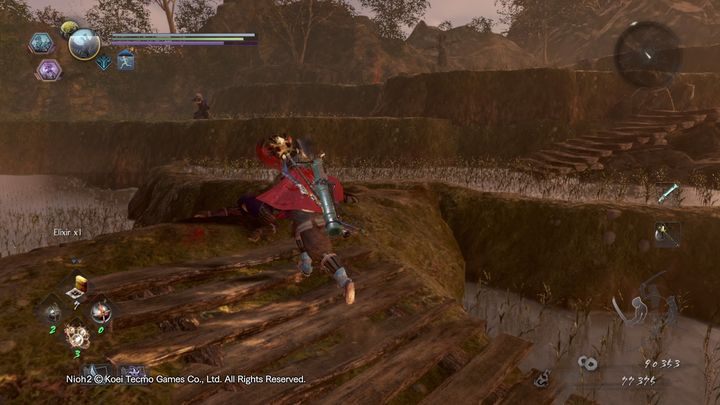 Defeat other enemies in a step-by-step manner and once you will get to the top head to the left and walk straight ahead. However, watch out for more shooters. There shouldn't be that many enemies, so you can choose melee combat. 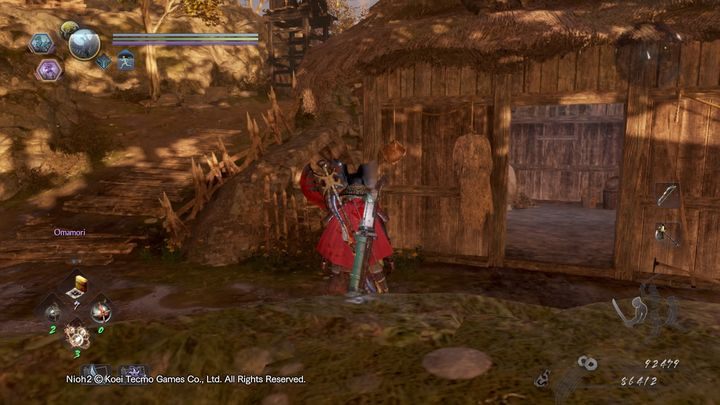 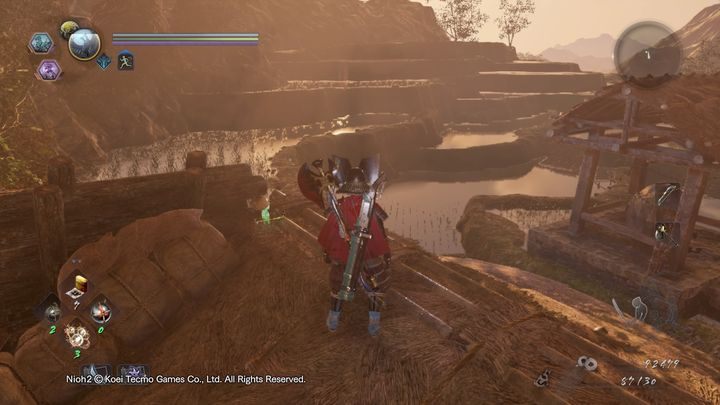 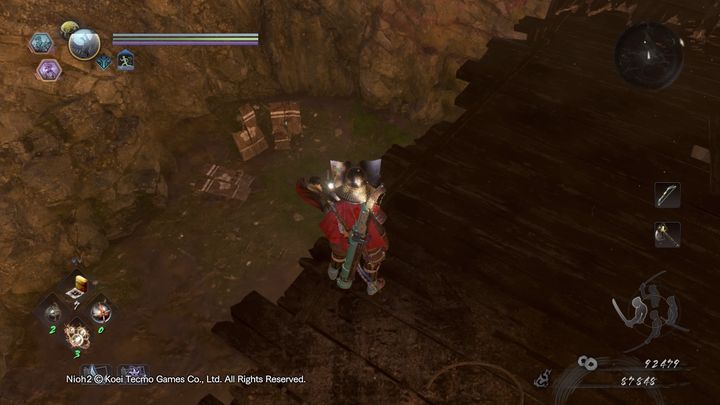 On the right side there is a cave. Enter it. You will encounter two human mages in the cave who mainly use ranged attacks. Run towards them and eliminate each sorcerer in a few seconds. 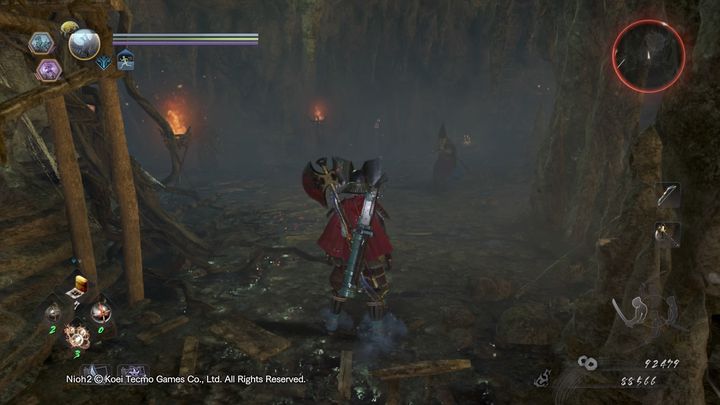 Instead of going towards the ladder on the right, there is a door around the corner on the left that you can open. There is a Ubume and two crystals inside. Forget about Ubume and destroy the crystals - not only you will defeat Ubume right away, but also two Onyudo wandering at the very top. So, you won't have to fight them a bit later. 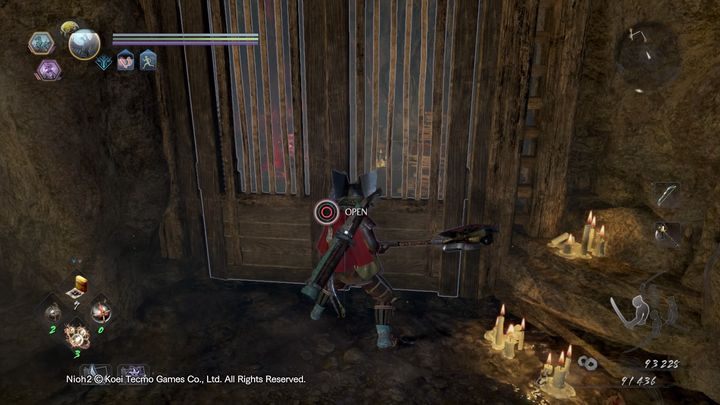 Exit the room, further to the left there is a Nurikabe. You can take off the talisman to free Nurikabe. You will get some items and unlock the shortcut. On the right there is a mage and a Sudama. Go ahead, where you have encountered Sudama, and climb the ladder. 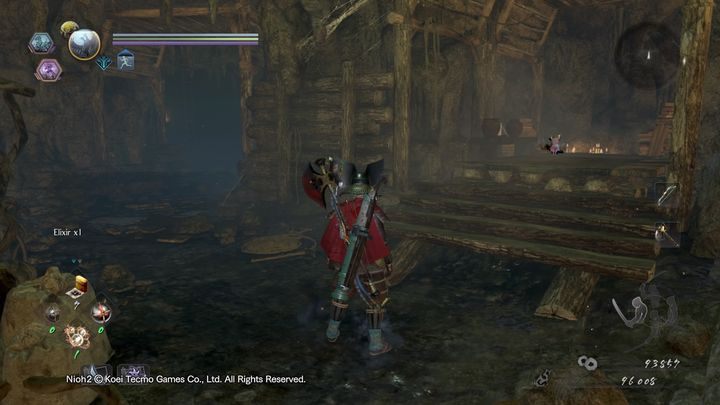 There you will find a path on the left, which leads to next location. In front of it there is a gate that you can open to unlock the shortcut. Before you go left, open the gate and go straight to the building. 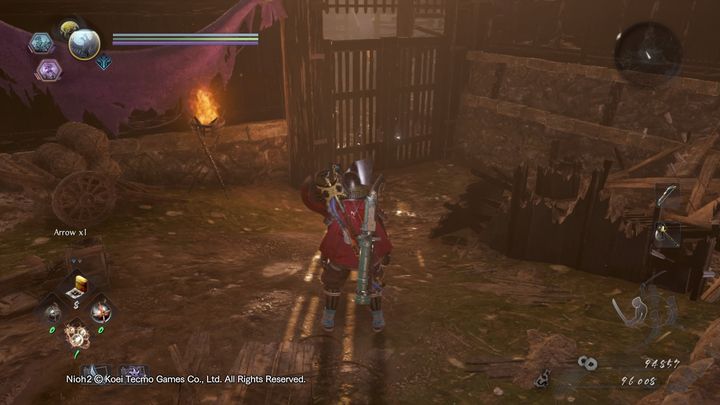 In the building on the upper floor you will encounter a Yokai soldier and a Yoki (spawned from Yokai land). Shoot down the soldier from a safe distance and then defeat Yoki. 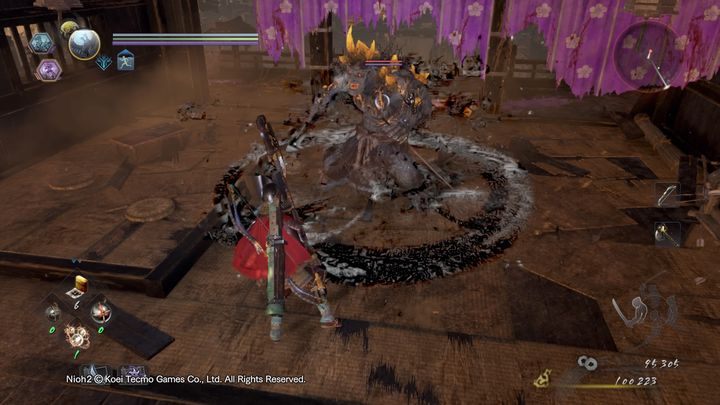 Around the corner of the building, on the right, there is another Kodama to collect. 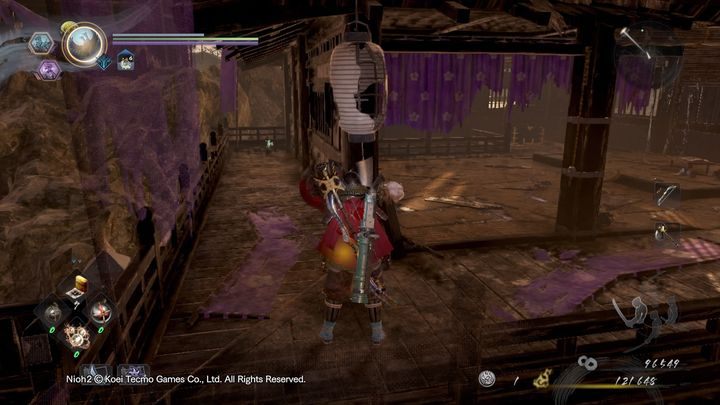 Jump down and go back to the door you have just unlocked, follow the path mentioned above. There will be some skeleton warriors on your way - wipe them out, all of them. 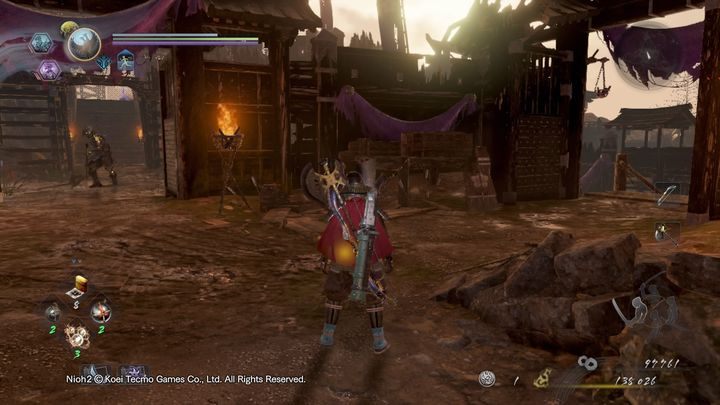 By going ahead you will notice a large warrior skeleton, but don't go that way first. Instead, take the way on the right. After heading there, open the door that will unlock another shortcut to the location. When you open the door, you can unlock another one by going left. 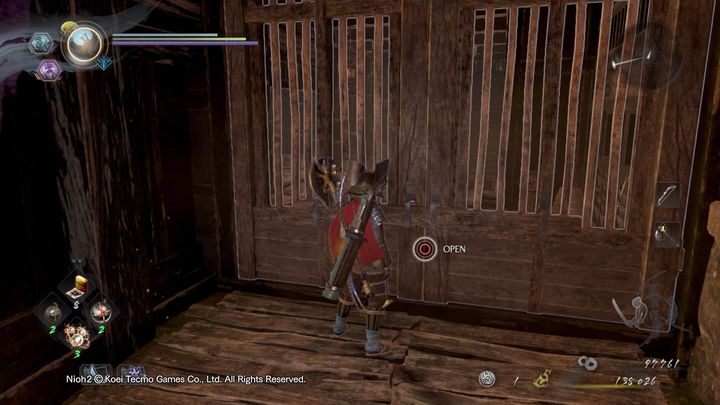 Return to the spot where you saw a big warrior skeleton and defeat it. There will be four skeleton warriors above. They will fire at you. Defeat them with your firearm - headshots are welcome here. 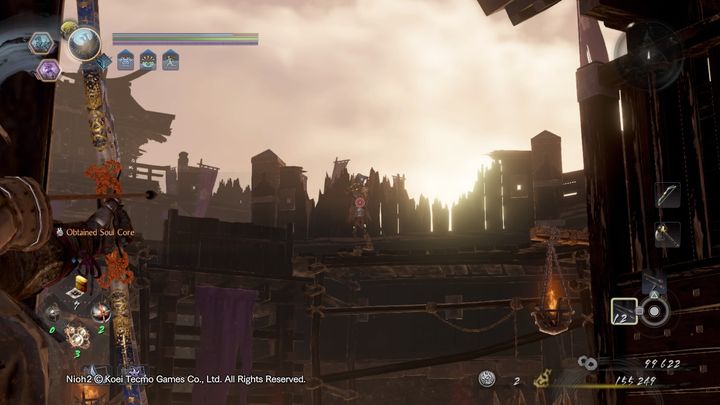 After defeating your opponents, go ahead. You will enter the land of Yokai. You will cleanse this location only after you destroy the red and blue crystal in front of you. If you have a charged Yokai transformation bar, then you can use it to quickly deal with crystals and defeat a significant amount of your opponents in that location. 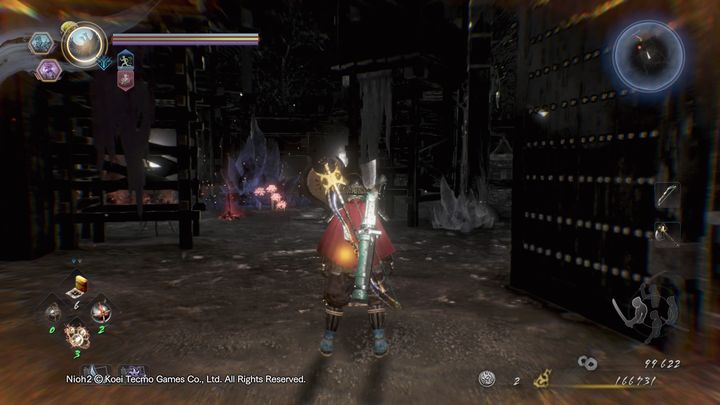 The safer option, is to go left and defeat a Yoki that lurks there. The Biwa Boku-Boku, who stands at the top, may summon more NPCs that will attack you. Defeat them and climb the ladder. 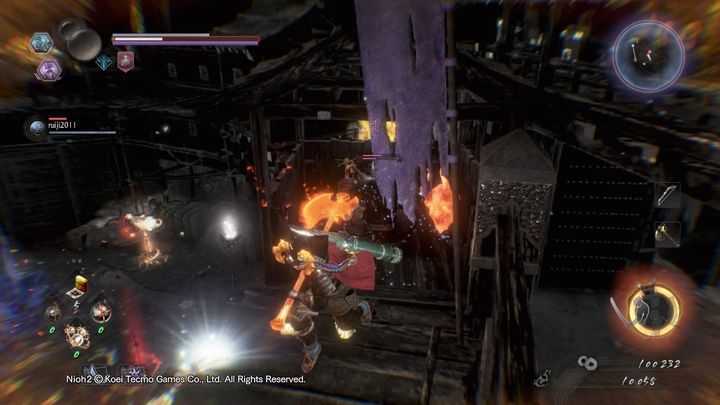 Kill a few shooters and defeat the aforementioned Biwa Boku-Boku. Jump down and destroy the crystals to free the location from the land of Yokai. This will allow you to rest by the shrine which was locked earlier.

The third shrine can be considered as the access to the boss of the region called Ryomen Sukuna. The boss arena is in front of the previously destroyed crystals. The description of the boss fight - battle against Ryomen Sukuna can be found in the next chapter of this guide.