On this page of the guide to Nioh 2 you will learn how to successfully defeat Azai Nagamasa. 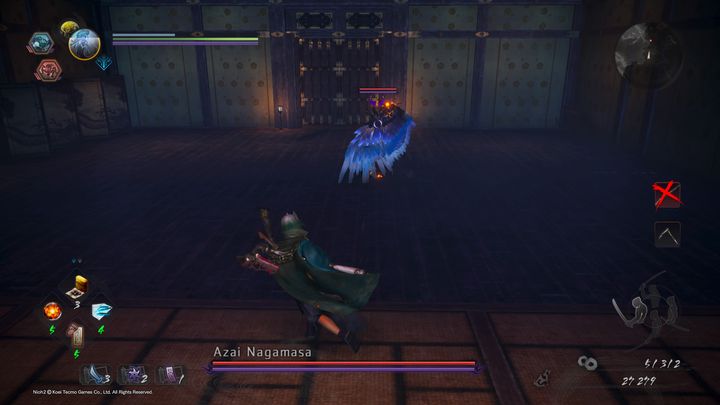 Azai Nagamasa is another boss who is a combination of Man and Yokai. When defending, he uses his wing, which allows him to repel attacks and return with counters, moreover he is able to fly and conduct airborne attacks. He also conjures water fields that appear on the ground. His weak point is the Amrita Crystal located on his back next to the wing. In the case of this boss, it is best to wait until he is done with his attacks and attack him then.

Azai will most likely begin the fight by flying high up in the air and performing a fast attack targeted at you. This attack is quite fast, but has a very small range. The moment Azai is above your head, make a quick dodge and start attacking him, he is vulnerable for a short while.

The boss can also create a medium-sized water field, this is one of his two Burst Attacks in this form. When you see the boss start to glow red and there are water fields underneath you, you have time to get out of there - try to reach a safe (without water) area. Azai is able to create 3 such fields from which water will splash and inflict damage from this element. In addition, he is also uses his normal attacks at this point, so it is best not to approach him. 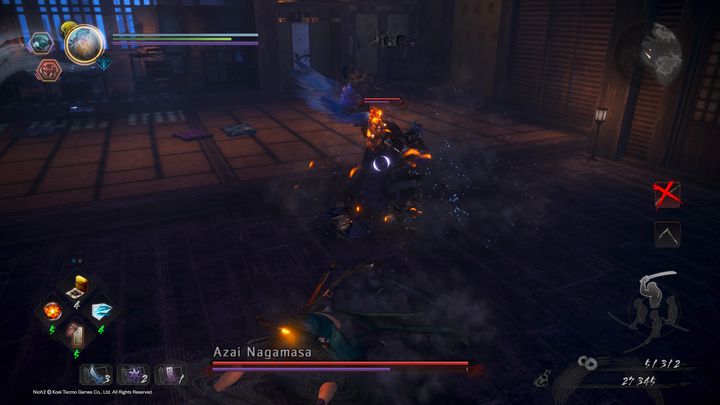 Azai will approach you covered by his one wing. This is his shield, which he uses to repel your attacks. Attacking him when he is veiled by the wing reduces a significant part of his stamina, but then you are stunned for a while and vulnerable to counterattacks. Try not to attack him when he's covered, unless he has really little stamina.

Azai can also perform a Burst Attack, which involves moving quickly over a medium distance and cutting you with his sword. When you see a red flash, and the moment you see the attack coming your way (the attack is really fast), perform a Burst Counter to inflict heavy Ki damage. 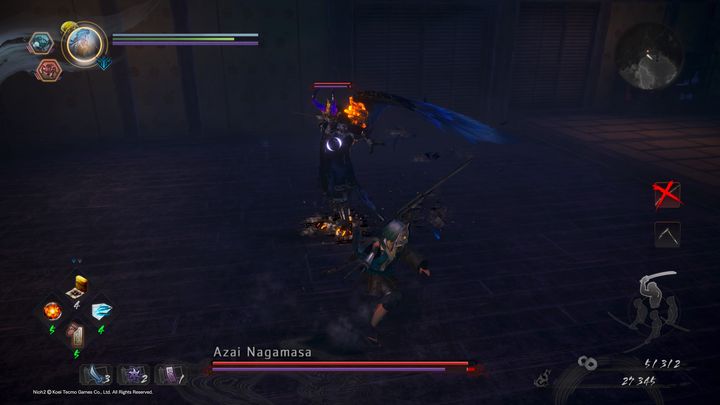 Azai also has two distance attacks. One of them involves throwing several Kunai in a horizontal line, he usually performs it while hiding behind his wing. In contrast, the second distance attack is performed when you are separated by a large distance and he begins to wave his sword in the air. It will trigger an air cut that flies towards you. In both cases

His usual strike is a 3-hit combo. The first two blows are usually the same, he simply swings his sword towards you, while the third attack may vary. Of the possible variants, Azai performs, for example, a grapple that is signalled by a black and white flame, a throw of several Kunai, or a spin attack. 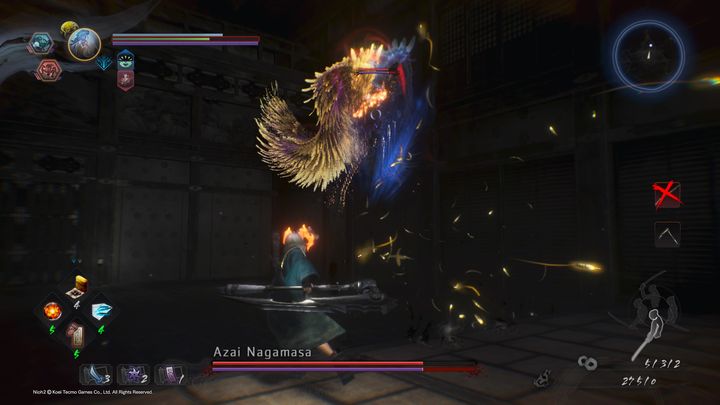 When the boss's stamina belt drops to zero or the fight lasts too long, the boss opens up a Yokai Realm which gives him new attacks. First of all, he grows a second wing, which allows him to stay airborne longer. Very often, he makes a high-pitched ascent, after which he fires yellow projectiles toward you. As you avoid bullets, the boss can "dive" towards you and perform a Burst Attack, or a grapple. The grapple has a greater range than the Burst Attack. When you see it coming down and flying towards you, it's best to do a Burst Counter. As for avoiding the missiles themselves, it's best to shorten the distance and find yorself behind the flying boss, because then the missiles won't hit you. But if you don't have the ability to shorten your distance, run sideways when you notice them close together.

It is also worth noting that his primary attacks are slightly faster when in the Yokai Realm.