The Village of Cursed Blossoms is the first main mission in NiOh 2. During it, you need to go to the cherry blossoms to find who sent the letter you received a moment ago. This page contains a walkthrough for this mission.

The first thing you will see after starting the mission is the shrine - pray. This is your respawn point. If you die before you pray at another shrine, you will return to this place. Going further along the path, you will come across a wooden gate. It is closed - you have to go around. Follow the path to the left of the gate (on the way you find a corpse that can be looted) - you will encounter the first enemy. You shouldn't have problems defeating it.

Gozuki is patrolling an open space at the end of this path. To defeat him, you need to quickly run to the enemy (do it after he ends his attack), strike the enemy a few times and get out of his weapon's reach. If you are unable to escape from his reach or you get attacked, use the block. This way, you will receive less damage. In addition, Gozuki will stop attacking some time after he loses sight of you. You can use this to deal surprise damage.

Note: Gozuki behaves just like Mezuki, the boss you face at the end of the quest. Therefore, fighting it can serve as practice. If you think that he is too difficult for you right now, you can go back to him later by using a ladder located at the cliff - you will need to lower it from the top. 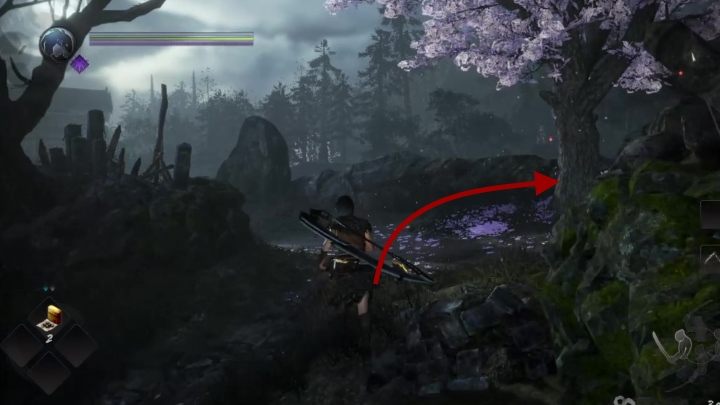 Head towards the purple tree. The path forks here. If you go left, you will come across a closed gate. Go there, you will find bodies that can be looted. Going to the right, you reach a bridge with Gaki nearby. This fight shouldn't be a problem - try to make your attacks push the opponent into the abyss. Open the gate, before you go any further. If you die, you won't have to follow the same long path again. 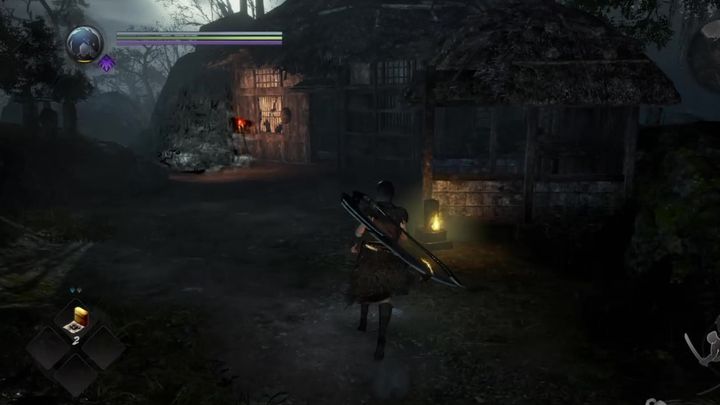 Another Gaki is just beyond the bridge. You reach an abandoned cottage. Go through the only passageway - if you cross the zone here, you will spawn Enki. Before you do this, deal with the two Gaki located at the second exit of the cottage. This way, you can avoid a situation where you have to face three opponents at the same time. There is also a Revenant grave in this area - you can summon it and fight. 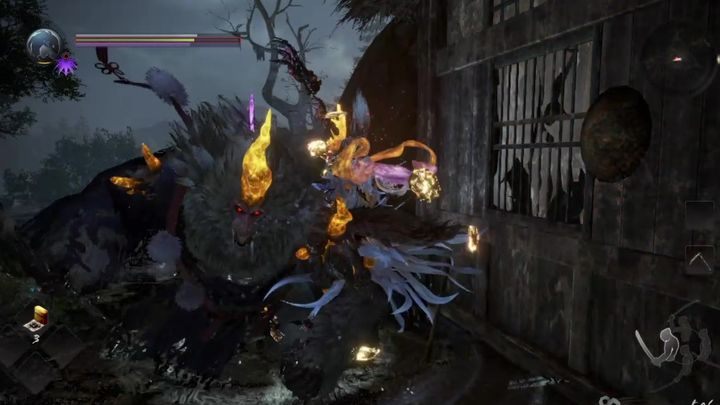 A good strategy for Gaki is to run to the opponent, attack a few times and then retreat. Gaki uses a lot of fast and strong attacks that can kill you in a single combo. In addition, if you go too far, he will throw his weapon at you. You can avoid getting hit - just observe the enemy and dodge when he throws the weapon.

As soon as you unlock the passageway, you will encounter first Rogues. Be careful not to provoke a fight with more than two at the same time. The paths are narrow which makes dodging difficult. 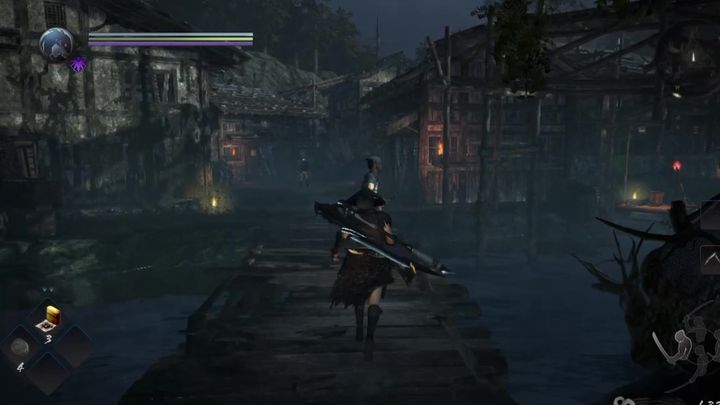 You will reach the second Shrine. Pray at it - if you have reached a new level, you can distribute points to specific statistics. Soon, you will reach a village. The first enemy is on the bridge. Attacking him from behind to throw into the water. Shortly after that, you will encounter two more opponents, one of them is an archer (the one standing still).

Lure the patrolling Rogue behind the building (let the enemy notice run after you). There you can freely kill him without a risk of getting shot. After that, destroy the boxes (if you didn't do it during the battle) and go around the building. Once you reach the path, go right. There, break the chest and kill the archer. 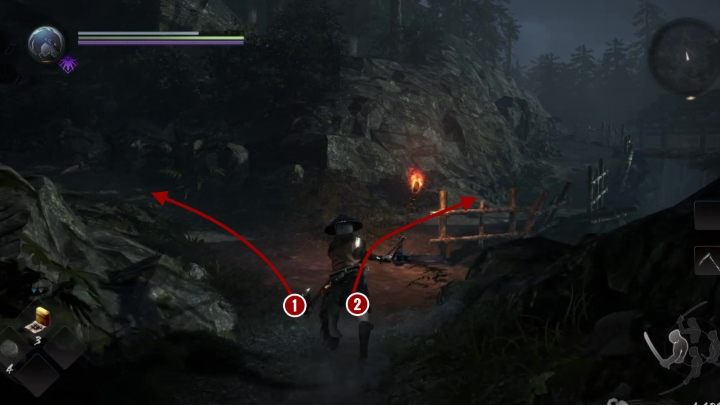 Then go back on the path and go up the hill. You reach a fork - one of the roads leads to a ladder that descends to the area captured by Gozuki [1]. The second one leads to the roofs in the village [2]. Wait behind the first roof until you hear a shot by the archer located on the nearby building. Then quickly run to that enemy - the enemy won't have time to shoot again in your direction. After you defeat him, you should get a bow. Use it to kill the guard standing nearby - one shot in the head is enough. Then jump off and kill the second opponent. 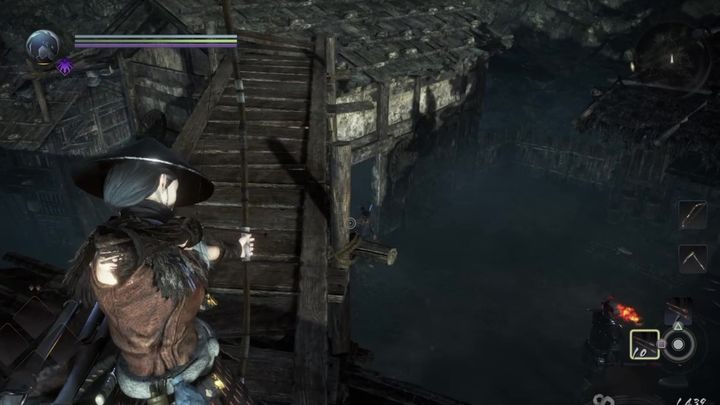 Going further, you will encounter another bridge. The guardian shouldn't be a problem for you. Cross the bridge and be prepared to face two more opponents. The quickest way to eliminate them is to lure them to the bridge and push them into the water. After the battle, enter the building on the left - there you will find the entrance to the roof. Use it and eliminate the remaining enemies on the roof.

The only path is guarded by Enki. But before you face it, eliminate Gaki that are in the building on the left. During this battle, you can use the building to your advantage. There is an entrance to the floor from which you can attack. 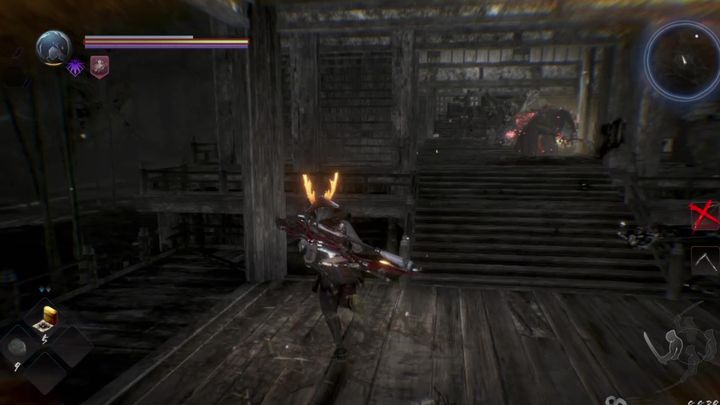 Moving further along the path, you will come across a Dark Realm. Going straight, you will find another shrine, however, it can't be used until you purify the area. Head to the left and you will reach the courtyard of the temple. There you will have to eliminate three Gaki. The safest way is to kill them one after another - lure a single Gaki to your position and then kill. Eventually, you will encounter Enki located in a building. Lure the enemy to the courtyard to give yourself more room for dodging.

Defeat Enki to purify the area. Enter the temple and take the key to the gate - it lies next to the corpse. Then go to the shrine and pray. Now you can open the gate located nearby. Behind it, you will find a path that will lead you to the boss - Mezuki. The strategy for this fight can be found on a separate page of the guide.