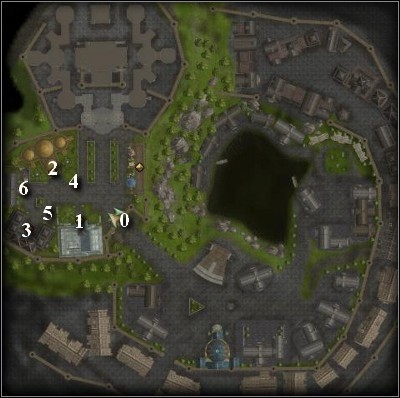 1. Thay Enclave - Inside you will find mage Akila and a merchant with a buying limit of 10000 $ per item.

3. Tavern - if Sir Nevalle is not outside you can find him here.

4. Phineas the Sensate - He appears with the quest (Neverwinter): Sating the Sensate. 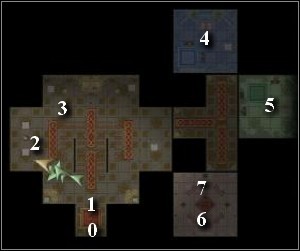 1. Alanna - will tell you about the three merchant organizations.

In order to enter the city you must pay 200 $. You will do that every time you try to enter Neverwinter up to the point you join one of the merchant guilds (see Quest 3: Missing Associates).

Quest: A Knot in the Weave

Received from: Akila, in Thay Enclave

Talk to the Red Wizard Akila. After a lengthy conversation he will ask you to research the Arcane Nexuses scattered throughout the world. You will receive a special artifact to do that. The list of points of interest for this quest:

Each time you return to Akila with a charged artifact he will open a chest for you. Each of them contains a magic scroll (using it gives each character in your party 1000 experience). After giving him three artifacts you will receive a new feat (Spellcraft +2). After giving him all six you will receive another feat (Spellcraft +4), and Akila will tell you that he needs to analyze the date you've gathered and ask you to come back later, later being the moment you leave the Viper Temple in north Samarach (you will get there following the main plot).

Representative of your merchant organization wants you to set up an outpost in Neverwinter. The matter can be resolved with sir Nevalle- all you need to do is give him 800 trade bars.

Representative your merchant organization will tell you about Phineas the Sensate, who needs help in some task. You will meet him outside of the temple. He wants you to bring him some rare resources. Giving him first three will earn you 500 trade bars. Another three will net you the same reward, but due to a bug Phineas won't reward you for the last two (there are total 8 resources available) expecting a third one.

Quest: Think of the Children

Received from: sir Nevalle after joining on of the merchant organizations (see Quest 3: Missing Associates)

Sir Nevalle is looking for a place to set up an orphanage. Tell him you'll try finding some room in the Crossroads Keep and go there to talk to Khelgarem about your idea.

Received from: the representative of your merchant organization (see Quest 3: Missing Associates)

Your first objective is to restore the trade relations with Port Llast. Head over there and enter the garrison. Inside you will witness a conversation between Rynn Shepherd, and Septimund. The latter can later join your party. Talk to Rynn. He will tell you, that the city is being troubled by two issues: an undead plague and unnatural storms. The storm issue can be solved by completing (Port Llast): The Wrath of Umberlee. Completing the quest will restore the trade in the city. If you want to end the Luskan occupation you can solve the issue straight away by killing Rynn Shepherd and all of the Luskan soldiers in the city. You can however, gain some allies for this fight - one of them is Prioress (see Quest (Port Llast): The Wrath of Umberlee), and the second is the army of the dead (see Quest (Port Llast): Army of the Dead). After dealing with Luskan troops return to the garrison and search Rynn's body for a key. Use it to open the locked door, behind which awaits Haeromos Dothwintyl - Port Llast's leader. Your reward will be a magic seal (AC bonus vs orcs +3, Constitution +2). If before killing the Luskans you haven't completed quests The Wrath of Umberlee and Army of the Dead Haeromos will now ask you to do them.

Received from: Akila, in Thay Enclave, after completing quest (Neverwinter): A Knot in the Weave and quest 15: Sa'Sani's Disappearance and entering north Samarach

2. Portal to the second part of the temple

3. Portal to the first part of the temple 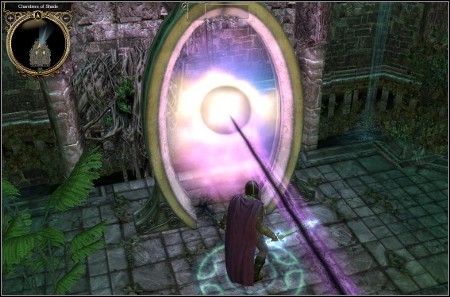 Akila found the source of the disturbances. It appears that it is a temple in north Samarach. Head over there to check what is the cause of the disturbances. Inside you will be attacked by a Shade Champion. Each time he nears death he gets healed by a stream of magic shooting out from the portal. Send some of your characters to the other side to deal with the mystic, who's been healing the Champion. The exit in the other part of the temple leads to the northern, unavailable up until now part of the Sword Coast. Return to Neverwinter and tell Akila what has transpired.