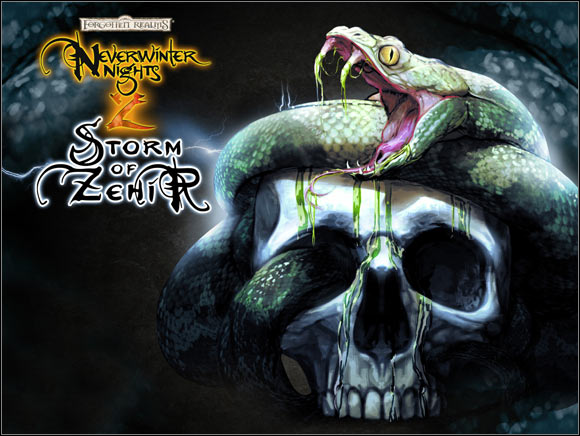 Welcome to the guide to Storm of Zehir - the second Neverwinter Nights 2 expansion. I hope that this guide and walkthrough helps you enjoy the gameplay and discover the secrets of Storm of Zehir.

The text has been split into following sections:

Party - where you'll find tips on creating your party, companion descriptions and the information on Adventurers Guild where you can learn party feats.

World Map - rules for moving about the world map, which changed drastically in this expansion, and the descriptions of some of the random encounters.

Trade - the basics rules for managing trade, listings of resource prices in each city and costs for expanding your merchant organization.

Locations - location descriptions along with side quests that can be obtained in them.

If a location is marked with (V) or I.e 12. Barrow - Volo, it means, that the location is of interest to Volo and it's tied to the quest you get from him early in game. 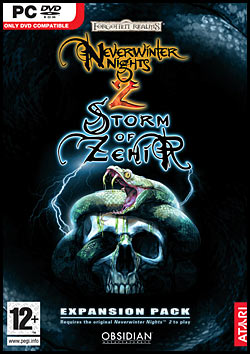 Neverwinter Nights 2: Storm of Zehir hearkens back to the days of the Baldurs Gate and Icewind Dale franchises by including full party customization, dungeon crawling, and free exploration of a non-linear game world via an Overland Map. The gripping storyline foreshadows the events that will take place in the Forgotten Realms with the coming of release this June of the Fourth Edition of Dungeons & Dragons Roleplaying Game. In the aftermath of the defeat of the King of Shadows, the Sword Coast is in the midst of an uneasy economic recovery. Trade syndicates have sprung up to exploit the post-war confusion for their own ends. The players party will wade into this uncertain environment; in order to increase their own fortunes, they can either ally with a syndicate to create a trade empire, or cut their own path through Faerun by preying upon caravans and selling the goods on the black market. As they attempt to extend their influence, players will become aware of a new faction working behind the scenes: the evil, shapeshifting, serpentine Yuan-Ti.

In addition to trading and economic manipulation, the Neverwinter Nights 2: Storm of Zehir Overland Map allows players to explore the Chultan Peninsula and Sword Coast in a non-linear manner never before seen in any of the Neverwinter Nights games. Exploration will take players from well-known locations, like Neverwinter and Crossroad Keep, to more exotic areas, such as the xenophobic jungle nation of Samarach. Groups of highwaymen and monsters populate the Overland Map and the farther from civilization the player roams, the more difficult the encounters become. The 15-hour campaign in Neverwinter Nights 2: Storm of Zehir is also packed with new classes, spells, creatures, and playable races.

- Travel the Sword Coast and Samarach using the open ended exploration of the new Overland Map. Use skills like Spot and Survival while on the Overland Map to avoid ambushes and even find hidden locales and lost artifacts.
- Create your own full party of adventurers. Devastate your foes with a squad of fireball-flinging Sorcerers, form a solid wall of steel with a party of Fighters, or strike the perfect balance in your party by spreading out the classes you choose for your characters.
- Improved party gameplay including streamlined party conversations, a new Teamwork Benefit System, and powerful party feats.
- The world's economy reacts to your adventures and choices. And, through trading and quests, you can expand your merchant company into a massive trading empire.