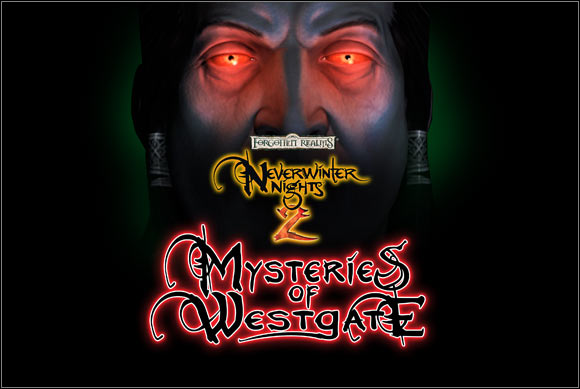 I would like to present a Neverwinter Nights 2: Mysteries of Westgate guide. The main text is divided into few chapters:

How to play - Couple of general hints.

Allies - The description of all friendly NPC's and quests that are connected with them.

Arena - The description of all fights that you can have on the arena.

Main and side quests - The description of all quests.

I invite you to read this guide and look for the answers you are looking for. 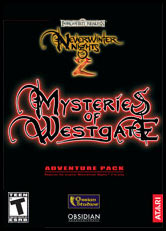 Welcome to the most infamous and corrupt city in the Forgotten Realms, the port metropolis of Westgate! Explore the secrets of this cutthroat capital of the Dragon Coast, where anything goes and everything has a price, and attempt to unveil its darkest mysteries before they consume you. Choose your allies wisely in this city of treachery, as you seek to encounter the rulers of Westgate's underworld, the deadly Night Masks.

Mysteries of Westgate is the first Adventure Pack for Neverwinter Nights 2, developed by Ossian Studios. This single-player Dungeons & Dragons® game comes with over 15 hours of non-linear gameplay, an epic story of horror and intrigue with multiple paths and endings, new creatures and tileset, as well as brand new music and voice-over. In this city-based adventure, players can explore 4 bustling districts of the city of Westgate: Harbor Loop, Market Triangle, Arena District, and subterranean Undergate.

Start the game with a level 8 character and battle against some truly epic and horrific foes to progress up to level 14. Recruit 3 new companions to travel with you, each with their own unique personalities and goals, and win or lose influence through your words and actions to ultimately decide their fates.

Mysteries of Westgate requires the original Neverwinter Nights 2 to play, but is also fully compatible with both the Mask of the Betrayer and Storm of Zehir expansion packs, allowing players to use the new classes, races, and other features from these games (expansions are not required to play Mysteries of Westgate).

- A 15+ hour campaign of high adventure with multiple paths and endings for players to choose from - an ideal role-playing experience!
- Non-linear gameplay with plenty of sidequests to uncover and solve in different ways, including class-specific options.
- Well balanced so that even the weaker player classes, like bards, will have a fun time.
- 4 new creatures including the wererat and quelzarn.
- A new Sewer tileset used to create the seedy underbelly of Westgate, with tunnels, vaulted ceilings, rusty pipes, deep pools, and bridges.
- 25 minutes of hauntingly beautiful new music from composer David John.
- Hundreds of lines of new, professional quality voice-over.